Progeria is an extremely rare genetic disorder that causes children to present with symptoms that resemble “accelerated aging.” A child with the condition takes on the appearance of an elderly person, including hair loss and thin skin. Surviving on average merely 13 to 15 years, these children often die from a heart attack or stroke, diseases that are generally associated with advanced age.

The underlying genetic cause is complex. It is the result of a single point mutation (that is, a single “letter” in the DNA is changed from G to C), and it yields an unexpected and catastrophic outcome. To understand why, an explanation of the genetics of higher organisms (like plants and animals) is in order.

Genes contain the information to encode proteins. The first step in the process of converting the information in a gene to a protein product is to transcribe (“photocopy”) the gene into a molecule known as messenger RNA (mRNA). The trouble with mRNA in higher organisms is that it is riddled with garbage sequences, known as “introns,” that need to be removed. The protein-encoding sequences, known as “exons,” are then strung together. The process of removing introns from mRNA for the purpose of stringing together exons is called splicing. When the splicing process is complete, the mature mRNA is translated to protein. 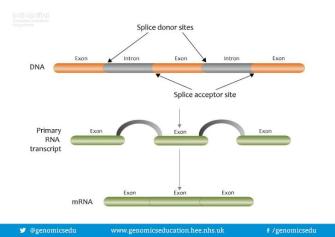 In plants and animals, mRNA “splicing” removes the introns and strings together the exons. Credit: Genomics Education Programme via Flickr

As with all biological processes, splicing can go wrong. Typically, splicing occurs only at the ends of exons, so that the end of one exon is spliced to the beginning of the subsequent exon. In progeria, something very strange happens. The G to C point mutation mentioned above occurs in a gene called LMNA and reveals a cryptic splicing site in an inappropriate location. The outcome is the removal of a crucial exon (see “exon 11” in the figure below), which results in a deformed protein called progerin. (The normal protein, which contains exon 11, is called Lamin A.) 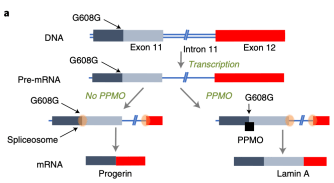 A mutation in a gene called LMNA results in inappropriate mRNA splicing. This is the underlying genetic cause of Hutchinson-Gilford progeria syndrome. Credit: Michael R. Erdos et al., Nature Medicine, 2021.

Now, a team of researchers led by Michael Erdos and Francis Collins (the current director of the National Institutes of Health) has devised a highly precise potential treatment that targets the underlying genetic cause of Hutchinson-Gilford progeria syndrome. The results are reported in Nature Medicine.

Existing treatments are not ideal, as they both have serious side effects. The drug lonafarnib causes gastrointestinal problems, and the drug everolimus causes immunosuppression. A more targeted approach, therefore, is needed.

Erdos and his colleagues have identified a potential candidate, which comes from a class of drugs called “antisense peptide-conjugated phosphorodiamidate morpholino oligomers” (PPMOs). Essentially, it’s a molecule similar to DNA or RNA with a tiny protein attached. The PPMO can be designed to recognize a very specific mRNA sequence, and in this case, it can be engineered to recognize and bind to the cryptic splice site next to exon 11. This physically blocks the cell from inappropriately splicing out exon 11 and allows it to produce a normal version of the protein (Lamin A).

Using mice that were genetically modified to mimic progeria, the researchers showed that their PPMO drug helped prevent the onset of progeria symptoms and extended the lives of the mice by nearly 62%. 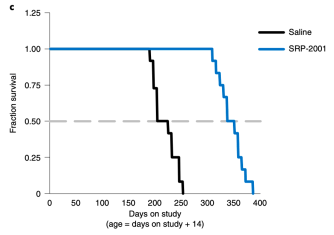 The authors believe this evidence justifies proceeding to human clinical trials. Of course, just because a drug works in a mouse does not mean it will work in a human. But this potential new treatment provides hope for those suffering from one of the world’s most devastating genetic diseases.

Tags
biologydiseasegeneticshuman bodymedical researchmedicine
In this article
biologydiseasegeneticshuman bodymedical researchmedicine
Related
Health
How saliva changes the flavor of food
“It’s a liquid, but it’s not just a liquid.”
Neuropsych
Asthma drug brings back “lost” memories
In a study involving mice, scientists used two different techniques — one optogenetic and one pharmacologic — to recover “lost” memories.
Life
Our antidepressant drugs are affecting animals and ecosystems
A toxicologist explains the impacts of antidepressants on fish — and no, they’re not getting any happier.
Health
New blood types are often discovered following medical disasters
New blood types are regularly discovered by an unusual absence or an unusual presence — both of which can result in tragedy.
Neuropsych
How you breathe affects your brain
Your breathing rhythm influences a wide range of behaviors, cognition, and emotion.
Up Next
Hard Science
Ancient physics: How Democritus predicted the atom
Democritus also did not believe in free will but was still known as the “laughing philosopher.”