There is an epidemic going on today that you hear almost nothing about. Yet it effects around 50 million Americans, according to the National Institutes of Health (NIH). That’s more than those diagnosed with diabetes and cancer combined. It’s a chronic pain epidemic and it’s everywhere. Such pain is not only devastating for the person and their family, it is also the leading cause of disability. A higher number of cases puts more of a burden on the healthcare system and hampers economic growth. So it isn’t only the person and their closest kin who suffer, but society as a whole.

Unfortunately, therapies haven’t changed much over a hundred years or more, as little is really known about the phenomenon of pain itself. There are really two main options in terms of therapy. The first is non-steroidal anti-inflammatory drugs (NSAIDs) such as aspirin, ibuprofen (Advil, Bayer), acetaminophen (Tylenol), and naproxen (Aleve). There are stronger prescription varieties of these as well.

The second option is opioid painkillers. Derived from opium, the most common types prescribed are morphine, OxyContin, Vicodin, Percocet, oxycodone, hydrocodone, and fentanyl. Of course there are many others. Though effective in the short-term, 60% of patients find that building up a tolerance significantly impedes treatment over time. Unfortunately, three to four percent of Americans receive morphine or one of its derivatives to manage severe or chronic pain, long-term.

In the last decade, an increase in the prescribing of opioids has followed the pain crisis’s upward trend. When taken as prescribed, opioids are safe and effective. But as the body begins to build up a tolerance, pain tends to bleed through. Oftentimes, increasing dosage is not recommended past a certain point. Alternative therapies such as acupuncture, tai chi, yoga, and physical therapy are usually proposed alongside opioids. Even so, patients don’t always find these options effective. 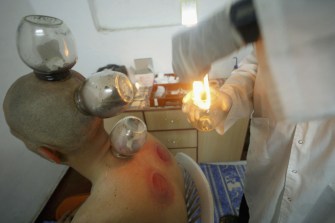 Cupping is the latest trend in alternative therapes. But many of these don’t reduce pain significantly enough.

Medical marijuana advocates have suggested cannabis therapy alongside opioids. Some studies have found that it does not increase the risk of addiction or overdose, and in fact gives additional pain relief. In fact, one study out of the University of Michigan found a 64% reduction in opioid use, when medical marijuana was made available to pain patients. But for many, this option may not be viable.

For those patients with bleed through pain, the motivation to take more than prescribed is great. Though they may find relief in the near term, the patient will soon find themselves increasing dosage once again when tolerance has increased, and so inching ever closer toward an overdose. It is through this process, and through teens and young adults swiping pills from medicine cabinets, that the prescription opioid epidemic has taken hold. 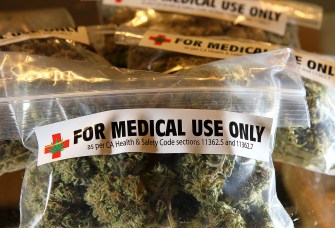 Medical marijuana may help. But it’s not a viable option for all patients for a number of reasons.

2.1 million in the US were addicted to prescription painkillers in 2012, according to the NIH—the latest numbers on record. And overdose deaths have increased fourfold since 1999. It is also fueling a heroin epidemic, as the street drug is less expensive and more readily available.

Big pharma has responded by offering extended release opioids, in an attempt to give patients more relief and discourage them taking more than prescribed. Other drugs have abuse-deterrent features, such as pills one is unable to crush, and so cannot snort or use intravenously. Yet, many see this as a technological fix, putting a Band-Aid on an already out-of-control problem. Also, it does not address the issue of bleed through pain.

Besides being little understood, not enough research is conducted to learn more about chronic pain. Today, the race is on to find ways to overcome these problems, and deliver better pain relief to those who are suffering. One new study, published in the journal Neuropsychopharmacology, has located the brain mechanism that causes opioid tolerance. Researchers have even devised a way to overcome it. 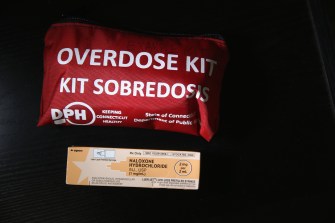 An opioid overdose kit. These are ubiquitous now across the country due to the opioid addiction epidemic.

Investigators from Emory and Georgia State Universities found, for the first time, how morphine tolerance comes about. This is an inflammatory response triggered when chemical messengers called cytokines are released inside the brain. By blocking cytokines, researchers say pain could be relieved consistently with morphine over time, at only half the dosage. These scientists were able to illustrate how the inflammatory response occurred in rats’ brains, and that blocking cytokines could undermine tolerance.

The mechanism for tolerance buildup works like this. Over time, morphine interferes with homeostasis, or the body’s ability to manage functions in a rhythmic and timely manner. Since it no longer recognizes pain, the body moves to rid itself of this foreign agent and reestablish balance within the system. To do that, it triggers the immune response, which causes inflammation—used to drive the agent out.

Another find, tolerance occurs quickly. One dose each day for three days was enough to cause the tolerance response to kick in. When rats were given a drug that blocked inflammation, tolerance to morphine plummeted. Researchers concluded the study by writing, “Our findings provide a novel pharmacological target for the prevention of opioid-induced immune signaling, tolerance, and addiction.”

To learn more about the prescription painkiller epidemic click here:

Only 2% of Alzheimer’s is 100% genetic. The rest is up to your daily habits.
▸
9 min
—
with
Lisa Genova
Up Next
Hard Science

Melanin, the pigment-producing part of human skin, may change the way batteries are manufactured and used.