In the early 2000s, it was reported that a certain kind of skin cancer treatment called photodynamic therapy, which uses light to destroy malignant cells, had a bizarre side effect: It was giving patients enhanced night time vision.

An essential component to this therapy is a photosensitive compound called chlorin e6. Some people being treated with chlorin e6 were upset to discover that they were seeing silhouettes and outlines in the dark. Researchers think they might finally know why this happens. 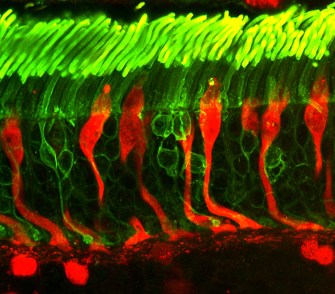 Rods and cones photoreceptors in a human retina.

The chemistry of vision

“Seeing” happens when a series of receptors in the retina, the cones and rods, collect light. Rods contain a lot of rhodopsin, a photosensitive protein that absorbs visible light thanks to an active compound found in it called retinal. When retinal is exposed to visible light, it splits from rhodopsin. This then allows the light signal to be converted into an electrical signal that the visual cortex of our brains interprets into sight. Of course, there is “less light” at night, which actually means that light radiation is not in a domain visible to humans. It’s at higher wavelengths (the infrared level) that retinal is not sensitive to. Hence, why we can’t see in the dark like many critters can.

But the vision process can be activated by another interaction of light and chemistry. As it turns out, a chlorin e6 injection under infrared light changes retinal in the same way that visible light does. This is the cause of the unforeseen night vision side effect of the treatment.

“This explains the increase in night-time visual acuity,” chemist Antonio Monari, from the University of Lorraine in France, told CNRS. “However, we did not know precisely how rhodopsin and its active retinal group interacted with chlorin. It is this mechanism that we have now succeeded in elucidating via molecular simulation.”

“Molecular simulation” is a method that uses an algorithm that integrates the laws of quantum and Newtonian physics to model the functioning of a biological system over time. The team used this method to mimic the biomechanical movements of individual atoms – that is, their attraction or repulsion to one another – along with the making or breaking of chemical bonds.

“For our simulation we placed a virtual rhodopsin protein inserted in its lipid membrane in contact with several chlorin e6 molecules and water, or several tens of thousands of atoms,” Monari explained to CNRS. “Our super-calculators ran for several months and completed millions of calculations before they were able to simulate the entire biochemical reaction triggered by infrared radiation.” In nature, this phenomena occurs within fractions of a nanosecond.

The molecular simulation showed that when the chlorin e6 molecule absorbs the infrared radiation, it interacts with the oxygen present in the eye tissue and transforms it into reactive, or singlet, oxygen. In addition to killing cancer cells, “singlet oxygen” can also react with retinal to enable a slightly enhanced eyesight at night, when light waves are at the infrared level.

Now that researchers know why the “supernatural” side effect occurs, they may be able to limit the chance of it happening to patients undergoing photodynamic treatment. Thinking further out, the researchers hope for the possibility that this chemical reaction could be harnessed to help treat certain types of blindness and sensitivity to light.

Ultimately, researchers say that this has been a big flex for the power of molecular simulations, which can give us astonishing scientific insights like this.

“Molecular simulation is already being used to shed light on fundamental mechanisms – for example, why certain DNA lesions are better repaired than others – and enable the selection of potential therapeutic molecules by mimicking their interaction with a chosen target,” Monari told CNRS.

Don’t hold your breath on night vision eyedrops though.

Tags
algorithmbiologybiomechanicsbiotechcancerhuman bodymedical researchmolecular biologyscience
In this article
algorithmbiologybiomechanicsbiotechcancerhuman bodymedical researchmolecular biologyscience
Related
Health
The scientific highs and lows of cannibinoids
Hundreds of these cannabis-related chemicals now exist, both natural and synthetic, inspiring researchers in search of medical breakthroughs.
The Well
Can we condition ourselves to be heroes?
Neuroscientist Robert Sapolsky on the science of temptation, and the limitations of your brain’s frontal cortex.
▸
6 min
—
with
Robert M Sapolsky
Health
How saliva changes the flavor of food
“It’s a liquid, but it’s not just a liquid.”
Neuropsych
Asthma drug brings back “lost” memories
In a study involving mice, scientists used two different techniques — one optogenetic and one pharmacologic — to recover “lost” memories.
Health
New blood types are often discovered following medical disasters
New blood types are regularly discovered by an unusual absence or an unusual presence — both of which can result in tragedy.
Up Next
Strange Maps
Does Tristan da Cunha have the world’s weirdest place names?
The world’s most isolated inhabited island also has some of the world’s strangest toponyms.