Cause and effect. There are many unintended consequences to every action, and actions, as we know, result in the manifestation of other forces, even if not always “equal and opposite.” In business terms, as one industry prospers, another suddenly finds itself tagging along and enjoying the ride. Such is the case of the munchies.

THC is why we get high when we smoke marijuana; it’s also why we crave sweets and carbohydrate-rich foods. When THC enters regions of the brain associated with mood regulation, it turns the dial to “euphoria.” As it strolls past the olfactory bulb it enhances our sense of smell — hello, buttery popcorn. And when it comes to neurons associated with eating, impulse control, and inhibitions, a cocktail is brewed: you’re going to eat more. Most likely that food is not going to be healthy.

Don’t take a few clinical trials as the final word on this. A new paper published on February 14 in the Social Science Research Network, by Michele Baggio (assistant professor of economics, University of Connecticut) and Alberto Chong (professor at Andrew Young School of Policy Studies, Department of Economics), argues that in over 2,000 U.S. counties with shifting marijuana laws, the munchies are real. They appear to be, at least.

Analyzing retail scanner data over a 10-year period (2006-16) in regions affected by Recreational Marijuana Laws (RMLs) and comparing them with counties not affected by RMLs, Baggio and Chong honed in on a few high-calorie foods. The results were clear: counties affected by RMLs showed a 3.1 percent sales increase in ice cream, 4.1 percent in cookies, and 5.3 percent in chips.

Why does marijuana give people the munchies? – Science on the Web #99

Why does marijuana give people the munchies? – Science on the Web #99

Especially affected by this trend are Colorado, Oregon, and Washington, though data from the 48 continuous states were studied. Given that at least 18 months of purchasing data were necessary for the study, the above were the only states with RMLs available in this time period. It will be interesting to see future results when California and others are factored in.

While this trend is great news for junk food companies, it doesn’t help our national waistline. A lot of focus on the marijuana legalization has been on potential health benefits, which will require a lot of research to separate meaningful data from opportunistic hucksterism. Try to find any healthy edibles, for example. Sure, inventive chefs are dabbling with fine cuisine, but the majority of what you’ll find on dispensary shelves is sugar, additives, emulsifiers, and other forms of chemistry. 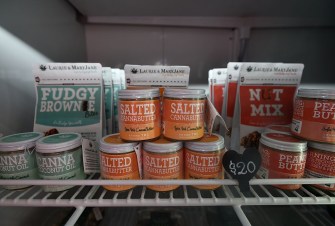 Edible products are seen inside a refrigerator at Oregon’s Finest, a marijuana dispensary, in Portland, Oregon, on October 4, 2015. (Photo by Josh Edelson/AFP/Getty Images)

As marijuana is delivered though a variety of gummies, cookies, and chocolate concoctions, calories are rarely considered in this new world of legalized THC products. If a cookie is the vehicle for getting you high, chances are you’ll continue on that trend once your palate is tickled. Fortunately some advocates recognize this; online guides for curbing your appetite offer important tips.

Infusing your THC into coconut oil or another high-fat oil instead of reaching for the brownie is one way to achieve the high without packing in sugar. Looking for nut-based edibles, as in the photo above, is a great choice. Mental stimulation is also key: lethargy builds on itself; when left to mind wander, the brain often wanders to food. Returning to the motivation myth surrounding cannabis, workout habits matter. If you’re accustomed to exercise, pre- and post-cannabis workouts can be quite enjoyable, as evidenced by marijuana-fueled gyms popping up.

Preparing healthy THC-laced foods is one way to address this issue; you can also meal prep before smoking. Strain plays a role as well. At least one guide purporting to guide you away from munchie-promoting marijuana exists.

Interestingly, after the initial boost in ice cream and chip purchases in regions affected by RMLs declined, cookies are still being consumed at increased rates. Some treats are apparently too sweet to abandon.

Becoming less physically active as you get older is not inevitable.
The Future

Between the instability of the real estate market and cryptocurrency fluctuations, everyone has been talking about bubbles. But what are they, really?
Health

Bilingualism confers various mental health and social benefits. Perhaps knowing a second alphabet confers even more.
Up Next
The Present

Disney, one of world’s largest entertainment companies, doubles down on its environmental plan.