Around one in seven people suffer from migraines. That’s 38 million in the US alone. Women are three times more likely to experience them than men. On average, most sufferers have one once per month. For some people the pain is so severe, it can be debilitating. Migraine sufferers are often put out of commission for hours, even days.

Although there are treatments and techniques to ease the pain, there is no cure. In fact, we don’t even know what causes them, although there have been a lot of theories. Hormone fluctuations, a brain chemistry imbalance, faulty genes, the brain stem interacting with the trigeminal nerve, electrical misfiring or restricted blood flow inside the brain, have all been prevailing theories at one time or another.

A new study offers compelling evidence that the head may not be the origin of these headaches, but rather the digestive tract. Certain bacterial species inhabiting the mouth and gut, if not at fault outright, are at least a trigger. These species break down nitrates, compounds found in certain foods, which are eventually converted into nitric oxide. This is the same compound goosed by Viagra, which in turn dilates the blood vessels downstairs in order to cause an erection. Headaches are also a common side effect of certain heart medications containing nitrates.

Though such dilation is good for the cardiovascular system, as it improves blood flow, it may cause too much blood pumping through the brain and scalp, causing a migraine to occur. We’ve known for a long time that foods containing nitrates such as red wine, processed meats, and certain vegetables can trigger migraines. Ever hear of a “hot dog headache”? High nitrate levels are the reason one occurs. The bacteria angle, however, is new. 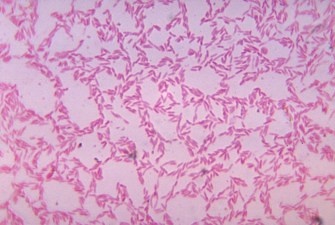 Investigators at the University of California-San Diego conducted the study, published in the journal mSystems. The senior author Antonio Gonzalez and programmer-analyst Rob Knight studied 1,996 stool samples and 172 oral samples collected from migraine sufferers. All the participants were a part of the American Gut Project.

This is the largest crowd-sourced research project ever conducted within the US. Thousands of people have given samples to be analyzed for the makeup of their microbiome or gut bacteria. A healthy human gut contains thousands of species, which when taken together number in the trillions. The exact makeup of each person’s microbiome is as unique as their fingerprint. But an imbalance in species, scientists are finding more and more, leads to certain disorders or illnesses.

The samples given to Gonzalez and Knight were genetically sequenced to discover what bacteria were present. This study proves association between nitrate-eating bacteria and migraines, but not causality. Further studies must discover whether these bacteria are the essential component or merely a trigger. For now, Gonzalez and Knight suggest migraine sufferers steer clear of all foods containing nitrates. They also speculate that someday a “magical probiotic mouthwash,” may become a viable treatment to overcome migraines.

To learn about another theory for the cause of migraines, click here:

Tags
American Gut ProjectAntonio Gonzalezbrainchronic paingut healthheadacheMicrobiomemigrainenitrateprobioticRob KnightUniversity of California
In this article
American Gut ProjectAntonio Gonzalezbrainchronic paingut healthheadacheMicrobiomemigrainenitrateprobioticRob KnightUniversity of California
Related
The Future
5 of the most amazing cracked codes in modern history
From 260-year-old ciphers to the most recent Zodiac Killer solution, these unbreakable codes just needed time.
The Well
Why confirmation bias kills your brain
Humans tend to hunker down in our own minds and trust what we already believe to be true. This emotion-based way of thought isn’t often the best way to think about anything, and often leads to gridlock.
▸
with
Barbara Oakley
Mind hack: Revive your focus with this 12-minute exercise
A neuroscientist explains how to master your focus.
▸
7 min
—
with
Amishi Jha
Take ultimate control of your attention span
Where do you place precious brain resources?
▸
6 min
—
with
Amishi Jha
Videos
Are you developing Alzheimer’s?
Only 2% of Alzheimer’s is 100% genetic. The rest is up to your daily habits.
▸
9 min
—
with
Lisa Genova
Up Next
Hard Science
Scientists Accidentally Create Simple Solution to Global Warming
Global warming is largely caused by carbon dioxide. Scientists at Oak Ridge National Laboratory just figured out a way to change it into something better.