A new treatment shows promise in becoming a one-time flu vaccine. In a recent study conducted by Professor Katherine Kedzierska at the University of Melbourne, researchers discovered a set of immune cells that have the ability to fight off all forms of the flu virus.

These “killer cells,” can target Influenza A,B, and C strains.

What’s the breakthrough with this vaccine?

In the study, which was published in Nature, researchers identified parts of the virus that haven’t changed within the past century. This is a novel and exciting approach for creating a one and done vaccine. The team started out by analyzing parts of the flu virus that were all common in each influenza strain. The goal was to find out which section would be the best target for a universal vaccine.

“It was really like finding a needle in a haystack. We started with 67,000 viral sequences and narrowed it down to three sequences that the killer T-cells can recognize.”

Kedzierska says that although this is a major breakthrough, at this point the universal vaccine would only be effective for half of the world’s population, because of the diversity of DNA, as in those who have the killer T-cells and those who have a different set.

“Now what we are working on is using similar cutting-edge technology is to find similar killer T-cells for the rest of the global population so we can protect everyone,” she said.

When we are infected with a flu virus, our cells dissect the virus and extend a protein called HLA to the parts of our cells afflicted. By utilizing our common immune defense system against a universal aspect of the flu virus, we should be able to be totally immune from all future flu mutations. 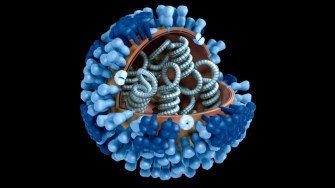 How do flu vaccines currently work?

Flu vaccines create antibodies that are developed in the body about two weeks post vaccination. Once the antibodies get to work, we’re provided protection by the viruses which are in the vaccine. Seasonal flu vaccines protect against that year’s most prevalent and most researched common flu for the upcoming season.

Our body’s killer immune cells will maintain a remembered immunity to an infection we were previously exposed to.

The problem is that there are new flu strains every year. That’s why we keep getting sick and some people perish from the virus. The virus is constantly mutating in order to thwart our immune systems, which means new vaccinations must be created every year.

How many people have died from the flu last year?

The CDC reports that during the 2017–2018 flu season, there was a predominant mix of influenza A followed by influenza B viruses circulating around March of 2018. The season had an unusually high level of hospitalization rates and larger proportions of pneumonia and flu-associated deaths. As per the statistics:

The flu can either be a nuisance or a life-threatening event. It’s good to know that we’re making progress on this virus and most likely one day throw it in the dustbin of old deadly diseases.

Kids don’t always make you happier. Here’s why people have them anyway.
▸
5 min
—
with
Paul Bloom
Up Next
The Present

The contentious history of the Anarchist Cookbook

Numerous critics have called for the ban of the infamous instruction manual for violent civil disobedience.