In 2007, Timothy Ray Brown became the first person to be cured of HIV after receiving a bone marrow stem cell transplant, to treat leukemia, from someone who was naturally immune to the virus. Known as “the Berlin patient,” researchers have since tried — and failed — to replicate that incredible success in hopes of finding a permanent cure for the virus, which currently affects some 37 million people globally.

However, a team of scientists plan to announce tomorrow that a second person — known now only as the “London patient” — appears to also have been cured of the virus that causes AIDS, according to a New York Times report. The London patient is reported to have had Hodgkin’s lymphoma, which doctors treated in 2016 with a bone-marrow transplant, which, like the Berlin patient, came from a donor who had a mutation in the gene for CCR5, which rendered them naturally immune to HIV (About 1 percent of people who descend from Northern Europeans carry this mutation and are immune to HIV).

“[It] shows the cure of Timothy Brown was not a fluke and can be recreated,” Keith Jerome of Fred Hutchinson Cancer Research Center in Seattle, a doctor who wasn’t involved in the transplant, told The Associated Press.

But the new case is different in an important way. The Berlin patient had been subjected to harsh immunosuppressive drugs and, at one point, was put into a medically induced coma. He nearly died, the Times report states. That’s why some scientists have long suggested that replicating the success of the Berlin patient would be anything but simple: A patient must reach the verge of death to be cured of HIV.

However, because the London patient had a milder, more routine medical experience, it’s a promising sign that suggests future patients might not need to be put in excess danger to be cured.

“I think this does change the game a little bit,” Dr. Ravindra Gupta, a virologist at University College London who spoke at the Seattle meeting where the results were discussed, told the Times. “Everybody believed after the Berlin patient that you needed to nearly die basically to cure HIV, but now maybe you don’t.” 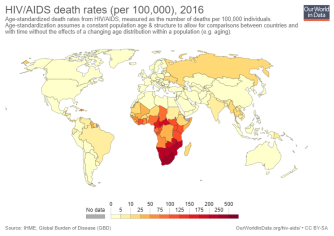 Still, the Times report states that most doctors interviewed seem hesitant to refer to the new case as “cured.” What’s more, the types of transplants in both the London and Berlin cases are risky and come with potentially long-term side effects, so it’s not clear that such transplants could ever become realistic treatment options.

“I’m not sure what this tells us,” Dr. Anthony Fauci, director of the National Institute of Allergy and Infectious Diseases, told the Times. “It was done with Timothy Ray Brown, and now here’s another case — ok, so now what? Now where do we go with it?”

The answer seems unclear, though some suggest other methods that target the CCR5 gene — and aren’t as costly or risky as transplants — are likely routes forward. One of the most notable examples of possibles uses is CRISPR, which is the tool Chinese scientist He Jiankui used to genetically edit the embryos — which included alterations to the CCR5 genes — of two girls born last year in China. They were born naturally immune to the disease as a result.

Whatever the way forward, the London patient represents hope that scientists might one day find a safe, scalable cure for HIV. “This will inspire people that cure is not a dream,” Dr. Annemarie Wensing, a virologist at the University Medical Center Utrecht in the Netherlands, told the Times. “It’s reachable.”