From 2012 to 2023, the costs of protein in the U.S. from cows vs. precision-biology food technology will reach parity, says independent think tank RethinkX. It will be a tipping point after which acceptance of modern foods will accelerate quickly, leaving the cattle industry effectively bankrupt by 2030 and five years later down to 10 percent of its current size.

This “protein disruption” will be followed by the collapse of a wide range of related and supporting industries by 2035, it will be, according to the researchers, “the deepest, fastest, most consequential disruption in food and agricultural production since the first domestication of plants and animals ten thousand years ago.”

RethinkX’s startling predictions are published in a report released September 16 titled “Rethinking Food and Agriculture 2020-2030 — The Second Domestication of Plants and Animals, the Disruption of the Cow, and the Collapse of Industrial Livestock Farming.” The ramifications, the group says, will be profound, far-reaching, and overwhelmingly positive, affecting people everywhere. In sum, things are about to change. Big time. 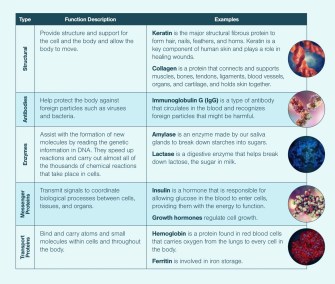 In the biological sense, food is simply packages of nutrients, such as proteins, fats, carbohydrates, vitamins, and minerals. Of these, proteins — the large molecules that are needed by all cells to function properly — are the most important. They are, quite literally, the building blocks of life. — RethinkX report 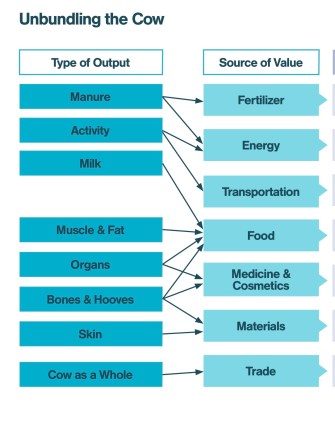 Moving food production to the molecular level promises a more efficient means of feeding ourselves and the delivery of superior, cleaner nutrients without the unhealthy chemical/antibiotic/insecticide additives required by current industrial means of production.

RethinkX says, “Each ingredient will serve a specific purpose, allowing us to create foods with the exact attributes we desire in terms of nutritional profile, structure, taste, texture, and functional qualities.” Even better, the report predicts that future food will be “more nutritious, tastier, and more convenient with much greater variety.”

RethinkX coins a term for a worldwide informational platform serving future food production: “Food-as-Software.” It consists of databases of engineered molecules, molecular cookbooks, if you will, that allow for decentralized, stable, and resilient production anywhere — RethinkX cites “fermentation farms” even in densely populated areas. It will provide a means for the continual reiteration and perfection of food molecules. It will also signify a “move from a centralized system dependent on scarce resources to a distributed system based on abundant resources.”

Of course, food isn’t the only thing we derive from animals and plants, and RethinkX also foresees the replacement of their use with PF products in pharmaceutical, cosmetics, and materials products. 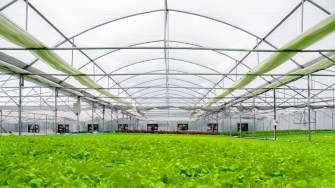 The ramifications of the protein disruption extend across a range of areas by 2030 and 2035, and the report breaks them into four categories. 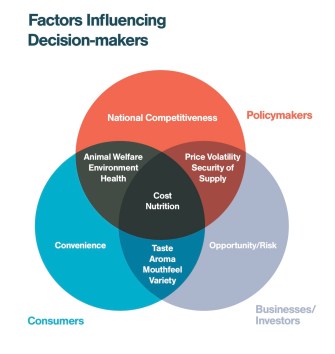 While RethinkX sees the coming disruption as inevitable, they see as equally likely attempts by current industries to slow it down. The think tank suggests a conscious regulatory approach, warning about two hazards in particular.

RethinkX’s model is based on their Seba Technology Disruption Framework. Unlike more mainstream modeling systems, it aims to more accurately predict the exponential growth that can result from the interaction of related and interdependent industries undergoing disruption in tandem. They caution wariness when attempting to read the future using more mainstream analyses that, “tend to make economies and societies poorer by locking them into assets, technologies, and skill sets that are uncompetitive, expensive, and obsolete.”

Of particular concern to the U.S. as it attempts to find the truth in competing voices — such as those of currently entrenched agribusinesses — is that modern food production will be unbound by geographic factors. It can take place anywhere. “So, if the U.S. resists or fails to support the modern food industry, other countries such as China will capture the health, wealth, and jobs that accrue to those leading the way.”

You can download RethinkX’s report by clicking here. It’s a fascinating look forward.

A successful trial that tested a vaccine against bladder cancer in dogs could help develop a similar one for humans.
The Future

A “bio-battery” made from genetically engineered bacteria could store excess renewable energy and release it as needed.
Health

Mater certissima est – the mother is always certain.
Up Next
Neuropsych

How to cope under pressure, according to psychology