While the human body is designed for decades of use, we are prone to breaking down at inopportune times. Our necks didn’t evolve to hold certain head positions (like hunched over a laptop). Foot pain is commonplace. And every year, there are more than 790,000 knee replacements in America.

The knee is a complex joint. While its major function is connecting the femur to the tibia, the fibula and patella complete the bone structure. Enter ligaments: the anterior cruciate ligament (ACL) prevents the femur from sliding backward; the posterior cruciate ligament (PCL) prevents forward sliding; medial and lateral ligaments stop side to side action. The medial and lateral menisci act as shock absorbers, while a number of bursae keep the joint working smoothly.

Until, of course, everything is not running smoothly. Knee replacements are common; meniscus surgeries even more so: an estimated 850,000 per year. Throw in 100,000 ACL reconstructions for good measure. Every year, over 1.7 million Americans are getting their knees worked on.

Fortunately, our understanding of the knee has gotten better. Many of these surgeries are relatively minor. My meniscal tear was so bad that it folded under itself and required my surgeon to add an extra hole while repairing it. Yet I still walked out of the hospital without crutches, didn’t need painkillers, and was in the gym three days later (with modifications).

The caveat: the surgeon had to remove almost the entire meniscus, taking out one of my shock absorbers. Bone-on-bone action increases the likelihood of osteoarthritis (which had already begun in my thirties). He said it’s likely I’ll need a knee replacement down the road.

The good news: a new artificial cartilage gel appears to be strong enough to work in knees. 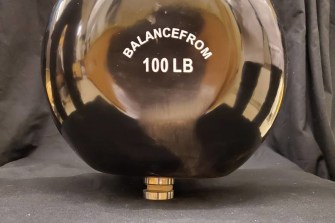 Duke researchers have developed the first gel-based synthetic cartilage with the strength of the real thing. A quarter-sized disc of the material can withstand the weight of a 100-pound kettlebell without tearing or losing its shape. Photo: Feichen Yang.

That’s the word from a team in the Department of Chemistry and Department of Mechanical Engineering and Materials Science at Duke University. Their new paper, published in the journal Advanced Functional Materials, details this exciting evolution of this frustrating joint.

Researchers have sought materials strong and versatile enough to repair a knee since at least the 1970s. This new hydrogel, comprised of three polymers, might be it. When two of the polymers are stretched, a third keeps the entire structure intact. When pulled 100,000 times, the cartilage held up as well as materials used in bone implants. The team also rubbed the hydrogel against natural cartilage a million times and found it to be as wear-resistant as the real thing.

The hydrogel has the appearance of Jell-O and is comprised of 60 percent water. Co-author, Feichen Yang, says this network of polymers is particularly durable: “Only this combination of all three components is both flexible and stiff and therefore strong.”

As with any new material, a lot of testing must be conducted. They don’t foresee this hydrogel being implanted into human bodies for at least three years. The next step is to test it out in sheep.

Still, this is an exciting step forward in the rehabilitation of one of our trickiest joints. Given the potential reward, the wait is worth it.

Life is the only physical system that actively uses information.
Health

A recent study reveals how nerve insulation becomes impaired in the brains of Alzheimer’s patients.
Up Next
Strange Maps