Now they’ve gone and done it. Keto diet enthusiasts have concocted all manner of unsettling dishes to kick the carbs: coffee with butter instead of cream, cauliflower pizza crust, and “cheesecake bites” made from cream cheese rolled in sugar-free Jell-O dust. Now they’ve come for that most saintly of all carb-loaded foods. The tortilla.

Lotito Foods, an Italian specialty foods manufacturer, has devised a tortilla made entirely of cheese. Called Folios, they contain no starch, wheat, flour, or additives and come in three flavors: Parmesan, Jarlsberg, and cheddar.

The cheese wraps are currently available in Northwest grocery stores, and they’ve garnered a lot of hype. They’ve been featured on the TodayShowand in Women’s Health, and keto followers are starting to take notice on social media.

But is a tortilla made of cheese truly the healthier option? As with any dietary inquiry the answer is yes, no, but also maybe. 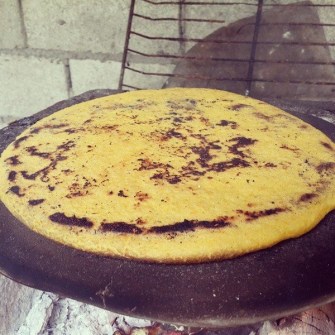 Can Lotito Foods’ Folios cheese wrap stack up to the comfortable goodness of a traditional tortilla. For ketogenic dieters, the answer is obvious.

To find out, we’ll need to compare the nutritional information of Folios cheese wrap to a traditional tortilla. We’ll stack the Folios’ cheddar flavor against an organic Mission whole wheat tortilla—for the incredibly scientific reason of that’s what I had in the fridge.

Where the two differ, no surprise, is carbs and fat content.

The cheddar wraps contain 13 grams of total fat, eight of which are saturated fat. That means one wrap is worth 20 percent of your daily recommended fat and 40 percent of your saturated fat (per a 2,000-calorie diet). It also has 45 milligrams of cholesterol. On the more salutary side, the wraps contain a whopping 11 grams of protein and no carbs.

The tortilla has far more carbs, but at 24 grams, it’s only one-tenth your daily total. It also has far less fat (5g), no cholesterol or saturated fat, and some fiber and potassium (7 and 2 percent respectively).

It’s worth noting that Folios cheese wraps’ ingredients are pasteurized milk, salt, enzymes, and annatto coloring. That’s it. There’s something incredibly pleasing about an ingredients list so simple.

Trying to stay low carb and don’t wanna taco ‘bout how much you miss #TacoTuesday? Folios™ to the rescue!pic.twitter.com/2RgEfGWJUQ

For the average, non-keto consumer, Folios cheese wraps can be a healthy dietary choice, as are most cheeses. As we’ve seen, cheeses provide a delicious source of protein, and they also sport calcium, vitamin B12, and healthy gut bacteria. Eating cheese regularly has even been linked to increased longevity.

A meta-analysis published in the Journal of the American Heart Association (JAHA) found that milk and cheese consumption were associated with lower risk of stroke. Another meta-analysis—this one published in the European Journal of Nutrition—supported that long-term cheese consumption lowered one’s risk of stroke in addition to cardiovascular disease.

Based on these studies, a healthy diet would make room for exactly one Folios cheese wrap per day, and no more cheese after that.

Then there’s that fat. The 2015-2020 Dietary Guidelines for Americans, put out by the U.S. Departments of Health and Human Services and of Agriculture, recommends that all Americans curb their sugar, sodium, and saturated fat intake. The report suggests Americans consume less than 10 percent of their daily calories as saturated fats—allotting you two cheddar cheese wraps per day.

If you’re not into keto but like the idea of a cheesy blanket for your tuna fillet, you can still enjoy a cheese wrap or two. You just have to be conscientious about the foods you eat in and alongside it. Nutritionist and author Bonnie Taub-Dix recommends not filling the cheese wraps with high-sodium or high-fat ingredients, such deli meats.

“Healthy types of tortilla wraps can provide whole grains and fiber, both missing from [Folios] wraps. The majority of us don’t get enough whole grains or fiber, but we get plenty of fat and protein,” Taub-Dix told Today. Most nutritionists, she notes, encourage a balanced diet with fresh produce, whole grains, and lean proteins.

But are the Folios cheese wraps a healthy choice for keto enthusiasts, who are, after all, the target market? That answer depends on whether the keto diet itself proves healthy, and the scientific consensus is currently TBD.

The ketogenic diet has seen some preliminary successes in studies and lab experiments. It’s been shown to produce weight loss faster than traditional low-fat diets. Lab studies using mice have suggested that the keto diet may improve neurovascular function to prevent cognitive decline and improve longevity. The diet also has a history of success as an effective treatment option for epilepsy and cancer.

“Keto diets should only be used under clinical supervision and only for brief periods,” Francine Blinten, a clinical nutritionist and public health consultant, told Healthline. “They have worked successfully on some cancer patients in conjunction with chemotherapy to shrink tumors and to reduce seizures among people suffering from epilepsy.”

Although noting its efficacious uses, Blinten added that it has the potential to damage the heart. “People are using this for cosmetic reasons, but it’s so extreme that it’s dangerous.”

Other experts agree that the short-term benefits can be outweighed by long-term harm. One study found that participants on the ketogenic diet did not perform as well at anaerobic exercises, which are known to strengthen bones, burn fat, and build muscle. While at the Harvard Health Blog, Marcelo Campos, MD, concluded:

But [the keto diet] is hard to follow and it can be heavy on red meat and other fatty, processed, and salty foods that are notoriously unhealthy. We also do not know much about its long-term effects, probably because it’s so hard to stick with that people can’t eat this way for a long time. It is also important to remember that “yo-yo diets” that lead to rapid weight loss fluctuation are associated with increased mortality.

We may not know much about keto’s long-term effects, but we do have good data on low-carb diets in general. A 2018 study from the European Society of Cardiology explored a sample of 24,825 participants and found that the lowest intake of carbs had a 32 percent higher risk of all-cause death, while “risks of death from coronary heart disease, cerebrovascular disease, and cancer were increased by 51%, 50%, and 35%, respectively.” The researchers confirmed their results alongside a meta-analysis of seven prospective studies with a combined 447,506 participants.

Study author Professor Maciej Banach, Medical University of Lodz, said in a statement: “Low carbohydrate diets might be useful in the short term to lose weight, lower blood pressure, and improve blood glucose control, but our study suggests that in the long-term they are linked with an increased risk of death from any cause, and deaths due to cardiovascular disease, cerebrovascular disease, and cancer.”

If you’re on keto as part of a clinical treatment, feel free to ask your doctor or nutritionist if you can incorporate cheese wraps into your diet. They could potentially help your treatment while adding culinary benefits, like reintroducing taco bowls to your life. If you’re on the keto diet outside of medical recommendation, then cheese wrap at your own risk.

“Lac-Phe” grants obese mice the benefits of exercise — without exercising. But don’t expect an “exercise pill.”
The Well

Nikolaas Tinbergen’s concept of “supernormal stimulus” explains why humans are attracted to a heightened version of reality.
Up Next
Health

Donating to the right charities can save lives.