Johann Hari is the New York Times bestselling author of Chasing the Scream, which is being adapted into a feature film. He was twice named Newspaper Journalist of the Year[…]
Go to Profile 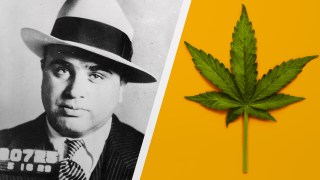 For a drug with zero fatalities and huge money-making possibilities, why is marijuana illegal in the first place? Author Johann Hari runs us through why he thinks it should be legal.
▸
with
Johann Hari

Author Johann Hari makes a great case for the legalization of marijuana. Not only would it create a new stream of tax revenue, but it would substantially lower the crime rate and practically kill the black market overnight. One has to ask, especially after watching this video: for a drug with zero fatalities, why is marijuana illegal in the first place? Johann Hari’s latest book is Lost Connections: Uncovering the Real Causes of Depression – and the Unexpected Solutions.

Johann Hari: In the late 1920s a young man outside Tampa in Florida picked up an axe and hacked his family to death. His name was Victor Lacarta.

At that point cannabis was not illegal in the United States. And a man called Harry Anslinger had taken over the Department of Alcohol Prohibition just as alcohol prohibition was ending.

So he inherits this huge government department that has just lost the war on alcohol. It’s riddled with corruption, and he wants to keep it going.

He had previously said that cannabis was not dangerous, we shouldn’t worry about it. He suddenly decided that cannabis was the most evil—literally these are his words: “The most evil drug in the world.” He said it’s much worse than heroin. He said, “if Frankenstein’s monster met cannabis on the staircase it would drop dead of fright.” And he latched onto the case of Victor Lacarta.

With the help of kind of the Fox News of his day, which is called the Hearst Newspapers, he announced that ‘Victor Lacarta had smoked cannabis. That’s why he hacked his family to death with an axe. And this is what will happen if we allow cannabis to spread, and we need to ban and prohibit cannabis.’

It was in the wake of that case that cannabis was banned. Years later somebody goes back, a researcher went many years later, decades later, a researcher went back and looked at Victor Lacarta’s files. There’s no evidence he even smoked cannabis. His family had been told he needed to be institutionalized a year before because he was severely mentally ill, but they decided to keep him at home.

The origins of the war on drugs, which I wrote about in my book Chasing the Scream: The First and Last Days of the War on Drugs, overwhelmingly looked like that.

If you’d asked me when I started to do the research for Chasing the Scream why was cannabis banned I would have guessed they would have given the reasons then that if you stop someone on the street now they would give, you know, we don’t want kids to use drugs, we don’t want people to become addicted. What’s fascinating is that stuff virtually never came up when they were banning cannabis, right, or indeed the other drugs. It was overwhelmingly a kind of racial panic and absurd hysterias about what was going to happen.

Now the one thing you can say in defense of the war on drugs and the war on cannabis in particular is we’ve given it a fair shot, right? The United States has spent a trillion dollars, it’s imprisoned more people than any other country in human history including Stalin’s Russia and Mao’s China. It’s destroyed whole countries like Columbia.

At the end of all that we can’t even keep drugs out of our prisons, where we pay someone to walk about the wall perimeter the whole time. Which gives you some idea of how well we’re going to keep it out of a country with 2,000-3,000 mile borders.

There is an alternative for how we can think about cannabis. There are places that have legalized cannabis and we can see the results.

So I spent a lot of time in Colorado, in Washington state. I actually spent time in places that have legalized other drugs – heroin, for example, has been legalized in Switzerland with extraordinary results. There have been zero overdose deaths on legal heroin in Switzerland in the more than 13 years since they legalized.

But with cannabis specifically, again we can see the results. When you ban cannabis several things happen.

The first thing that happens is, you will have noticed, it does not disappear. It’s transferred from licensed legal businesses to armed criminal gangsters. Those armed criminal gangsters have to operate differently to a licensed business. So you will have noticed the head of Budweiser does not go and shoot the head of Heineken in the face, right? Your local liquor store does not send people to go and stab people in the local bar, right? Exactly that happened at the alcohol prohibition, right? I mean exactly that. And it ended the day alcohol prohibition ended.

Why? Because when you ban drugs they have to operate in an illegal market where there’s no – and I learned this from lots of drug dealers I spent time with for Chasing the Scream, not just for fun. Though there was some fun in there as well.

An illegal market could only operate through violence, right? You have no recourse to—If I go up here now and I try to steal a bottle of vodka, you know, the liquor store will call the cops. The cops will come and take me away. So there’s no need for that to be violent, to be intimidating.

If I go out of here now and try to steal a bag of weed from the people who sell it not so far away they can’t call the cops, right? The cops would come and arrest them. They have to fight me. Now you don’t want to be having a fight every day if you’re a dealer, so you’ve got to establish a reputation for being so frightening that people wouldn’t be so stupid as to come and fight you, right?

So this is the ratchet effect you get with prohibition. You create a market that can only be regulated by violence and where there’s actually premium on being the most violent person and the most intimidating person, where you have to be violent and intimidating to protect your market.

Now when you legalize that goes away immediately. Where is Al Capone? Does anyone even know the head of Smirnoff’s name? Everyone watching this knows Al Capone’s name. I bet nobody watching this knows the head of Smirnoff’s name. What changed? It’s not the drug. It’s the fact that it went from being illegal and therefor controlled by gangsters to legal and being controlled by legal and licensed businesses.

The second thing that happens, which is a slightly more wonky point but I think is really interesting and important, is that milder forms of the drug disappear.

When you ban drugs there’s suddenly a premium on getting the biggest possible kick into the smallest possible space because it’s got to be smuggled, right?It’s got to be transported in secret. This happens with all drugs.

This is why cannabis has become much more potent.

The most popular form of consuming cocaine prior to it being banned was in tea—coca tea. You may remember a drink called Coca Cola. That really did contain exactly what it sounds like. They don’t exist anymore. What do you ever hear about coca tea, right? Coca Cola exists but it’s not what it was obviously.

The most popular way of consuming opiates by far was a drink called laudanum and something called Mrs. Winslow’s Soothing Syrup. It was small trace of opiates, right? Again they disappeared and the most popular form becomes heroin.

When you ban a drug only the most extreme forms of that drug become available.

If you’re concerned about the more extreme forms of the drug, which I think we should be with cannabis because there is – it’s not a huge relationship but there’s some relationship with dysfunctional behavior—Then you want to put a really high premium on getting milder forms of the drug available to almost all the users who want it, right?

So that’s another effect that happens with legalization. And you know, one of the things that’s so moving—everywhere I went where they moved beyond the war on drugs, from Portugal where they decriminalized all drugs to Switzerland where they legalized heroin for addicts, to Uruguay and Washington and Colorado where they legalized cannabis, the pattern was always the same.

It is super controversial at first and understand that people are really worried. And then they see the effects. It’s not a silver bullet. There’s still problems, but there’s such a significant improvement that the support massively rises.

So 55 percent of people in Colorado voted to legalize it in 2015. Today 70 percent of people support it. Governor Hickenlooper who opposed it now says it works really well. They’ve had a huge increase in tax revenue.

I interviewed one former police officer and he told me a story about this that really stayed with me. One day in the 70s he was staking out a dealer in a car park in Wayne in New Jersey in plainclothes.

And a kid came up to him and said, “Hey mister, will you go into that liquor store and buy me some booze? I’m not allowed to, I’m too young.” He was like a 12 year old or something. And he said “No, get out of here.” So the kid walked over to the drug dealer and bought some drugs from him instead.

And he had this kind of epiphany. He was like “Oh, actually legalization, a legal regulated system puts a barrier between children and drugs that does not currently exist.” If you’re a parent who doesn’t want your child to smoke cannabis (and if you’re a parent you shouldn’t because there is evidence that it can impair development for teenagers), you want to put a really high premium on getting cannabis out of the hands of armed criminal gangs who don’t care whether the customers are 13, 30 or 80 and getting it into the hands of licensed legal regulated businesses who have something to lose.

This is why in Colorado all the research shows there’s been a really significant fall in cartel and organized crime activities since they legalized. There’s been a fall in teenagers using—It was already quite low, but it’s fallen. There’s been a massive increase in tax revenue. You know it’s not perfect. There are some things I would have tweaked in the Colorado legalization but, you know, you can tweak a legal market. We don’t have any power over an illegal market. There’s nothing we can do about it, right.

At some point the president of Switzerland Ruth Dreifuss when she made the case to the Swiss people for legalizing heroin— and she’s one of the great heroes I’ve ever met in my life—She explained to them, “You know, when you hear the word legalization you picture like anarchy and chaos. What we have now is anarchy and chaos! We have unknown criminals selling unknown chemicals to unknown drug users all in the dark all filled with violence, right? Legalization is the way we restore order this chaos.”

At some point we have to look at the results.

It’s worked incredibly well, and let’s look at the places that are maintaining a criminal war on cannabis. How well is that working out for you?

3 ways to avoid the emotional drain of politics today