On November 6, Californians will vote on Prop 7, also known as the Permanent Daylight Savings Time Measure. If two-thirds vote for this initiative, California will abolish daylight savings time (DST) if federal law allows for it. On the “pro” side, ending DST is backed by medical researchers and economists, who have shown that changing the clocks biannually affects our circadian rhythms (and the entire economy) in negative ways. On the “con” side, children would have to go to school in the dark for a few weeks.

Our relationship to time has long been strained by strange philosophies. In the past, there were credible arguments for turning the clock back, mostly dealing with energy reduction. Those arguments have not held up, yet we remain loyal to the way things are because, well, change is hard. DST has only been in effect in America since 1966, and Arizona and Hawaii, like most of the world, do not recognize it, even as the Navajo tribal lands in Arizona do. The ritual causes more problems than it solves.

We’ve long had an interesting and troubling relationship with time, which is more fluid than we imagine: the distance your arm travels to raise your watch to eye level actually changes time—incrementally, to a degree we’ll never notice. Journey above the hemisphere to orbit the galaxy and it shifts drastically. Then there’s the feeling that time speeds up as you age, which is both a biological phenomenon and a cultural reality in this technological age. How do we grapple with so precious a commodity?

You’ve likely heard of social media cleanses and digital detoxes. For a while I thought these were silly, unnecessary pendulum swings for those who can’t control their addiction. But as our toys become even more addictive, I’ve been rethinking such ideas. The focus on the self—as in, the only thing that matters is what’s going on with my phone right now—is killing us, from the populism surging across the planet down to the physiological process in each of our nervous systems.

Texting and driving almost seems quaint given the places phones have invaded our lives. As urban centers throughout time have shown, we’re terrible at navigating common space—space being the necessary partner of time. Tech messes with our perception of both. Last weekend while visiting my father in Las Vegas, I was stunned by how many times an elevator door opened and someone rushed in without letting passengers out. While this used to be an opportunity for public shaming on the New York City subway, any response to my criticism was answered with…well, it wasn’t answered. They never looked up from their phone. Stroll down any urban street today and you’ll see dozens of heads consumed by their palms.

Are we really that busy? So consumed by the latest Instagram post or text message about nothing much at all save a respite from the boredom of analog reality that we’re willing to sacrifice our surroundings for distractions of insignificance? Or, are we as some have speculated, so involved with work that we block out any opportunity for a meditation of the moment with streaming bytes of data?

To those scrolling through social media while walking down stairwells, the addiction is a respite from the tedium of being alone with one’s thoughts. The work question is not necessarily a separate domain, given that we now work and play on the same device. The line is confusing and at times arbitrary. Nevertheless, it is an issue that only worsens the more our eyes gaze downward.

Being available to your employer seven days a week creates its own problems, as religion historian William R Black writes. That’s why he’s calling for a Sabbath, a day of break from work. Extrapolating from this idea, initiating a tech-free Sabbath would be a watershed cultural moment that would do our collective psyche much good. 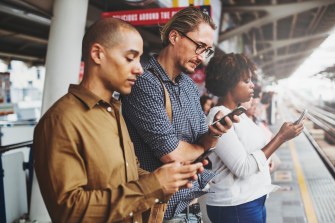 As Black writes, we shouldn’t think of a modern Sabbath as religious, even though Orthodox communities do still practice it. (Note: Kind of. Before I met my wife, she lived on the border of the Hasidic neighborhood of Williamsburg. She would often be walking around on Saturdays when a woman would call her inside of her home to turn on an appliance or click on the air conditioning. Loopholes are universal.) This secular Sabbath would, according to Black, have a democratizing effect, which is in alignment with the original Old Testament directive.

This commandment was written during a time of widespread slave labor. The Sabbath wasn’t self-care, he writes, but an integral component of the economy. It wasn’t just about how humans relate to God, but one another. An ideal Torahic community, he continues, was driven by “wholeness, enoughness.” It’s hard to see today how a culture accepting of slavery could claim such—a reason the Sabbath was necessary. No one was excluded from this rest. He continues,

There were no strings attached; the goal wasn’t accumulating power but reconciling the community.

Today communities must be reconciled differently. The gig economy has us turned on and tuned in every moment of every day. Instead of competing with one another at interviews, we have to dash to the next delivery or undercut our opponent on a design job. Along with this comes a decline in value to the god of efficiency.

In our neo-pharaonic economy, we are worth no more than the labour we can perform, and the value of our labour is being ever devalued. We can never work enough. A profit-driven capitalist society depends on the anxious striving for more, and it would break down if there were ever enough.

I agree with Black’s call for a work-free Sabbath, but a tech-free Sabbath would be even healthier. How we would get a nation—a world—to free themselves of this rampant addiction for even a day would certainly be a spectacle. Imagine people walking around in the street having to look at one another! Just as it took our medical establishment decades to understand the danger of cigarettes, who knows when the CDC will admit to the sheer destructive neurological power of these machines in our hands.

Of course there are benefits—my career, as is the case with so many of us, depends on these machines, working for a decentralized, global company that relies on Zoom calls and email to operate. Yet as Simon Sinek mentions above, it’s not the technology that’s damaging, it’s our imbalance to it.

The Luddites were not scared of machinery; they were fearful of losing their value to society. We could learn much from their failed rebellion, provided we put down our phones long enough to remember our own value lies far beyond the algorithms ceaselessly churning behind the apps keeping our attention fixated on the screen.

Anxiety can be good or bad. It turns out that it’s really up to you.
The Future

Think of a combination of immersive virtual reality, an online role-playing game, and the internet.
Health

Some scientists believe that DMT could revolutionize the treatment of depression.
Neuropsych

Psychedelics have been shown to help reduce depression. This study may show us why.
Up Next
The Present

Millennials would rather pay off their student debt than spend money getting hitched.