At the young age of 99, Tao Porchon Lynch still teaches weekly yoga classes and workshops internationally. Born prematurely on a ship crossing the English channel, her Indian mother died while giving birth. She was raised in France and India, working as a model, activist, actress, and wine enthusiast for most of her life. When I sat with her for an interview in 2010 she told me about walking on Gandhi’s legendary Salt March. She was eleven.

A few months before I sat down with Tao, she had broken her wrist. Fractures are common as we age and can even signal the end — my grandmother’s broken hip at 90 proved to be her final brush with mortality. Yet by the time I took a workshop with Tao at Manhattan’s Strala Yoga, just a few months after her fracture, she was crossing her legs into lotus and lifting herself off the ground on her hands. She was 92.

When I ask her about her inspirational resilience, she tells me yoga has been a part of her life since she was young. Besides the obvious physical benefits, the mindset adjustment yoga promotes reveals the practice’s true magic.

I’ve had a hip replacement. I’m getting dog food at A&P and got twisted, ending with a pin in hip. But health-wise I’m seldom sick. Mentally, I don’t allow myself to think about tomorrow and what will happen. I don’t like people to tell me what I can’t do. I never thought about age.

When asked about what scares her, she laughs and tells me that the only thing she’s frightened of is her assistant using her phone while in the car. To note, that’s one of her two business assistants. Tao still drives herself around Hartsdale and Scarsdale to teach yoga.

Can not thinking about age really make your body younger? Fortunately, there have been a number of experiments about just that topic. The answer is yes.

Journalist Anil Ananthaswamy reports on fascinating research that shows how important your mindset is in influencing the aging process. In 1979 Ellen Langer, now a Harvard University psychology professor, invited two groups of elderly men to visit a New Hampshire monastery. One group lived inside a time capsule: everything about their week-long retreat was dialed back to reflect 1959. The other group was told to reminisce but given no specific instructions or stimulation from any era.

The control group showed no physical or biological differences, save maybe the expected vacation results. The men told to live like they did 20 years ago, however, “looked younger in the after-pictures.” That’s not all.

“When Langer studied the men after a week of such sensory and mindful immersion in the past, she found that their memory, vision, hearing, and even physical strength had improved,” writes Ananthaswamy.

Langer never published her results. She didn’t have the funding to properly control the second group and didn’t want to release her data in a second-rate journal. But the experience never left her mind. Years later she conducted a study on patients with Type 2 diabetes. Forty-six subjects played computer games for an hour and a half. They had to switch games every 15 minutes. One group had a properly working clock; one had a clock that kept time slowly; the last clock was sped up. Langer wanted to know if their blood sugar levels would follow real or perceived time.

Incredibly, perceived time won out. How each subject thought about time influenced the metabolic processes inside of their bodies. Ananthaswamy writes that people between the ages of 40 and 80 tend to feel younger than their chronological age, while those in their 20 feel older. This makes sense, as Robert Sapolsky points out in Behave: after the age of 30 our metabolism slows down, which skews our perception of time. Time actually feels different. What’s amazing about the research above is we have a conscious decision in how we feel about that.

Florida State University College of Medicine psychologist and gerontologist Antonio Terracciano states subjective age is correlated with factors such as walking speed, lung capacity, grip strength, and bodily inflammation. As Langer’s work, among others, shows, it’s not necessarily the body influencing the mind. Your mindset about aging has an equally important role in aging. Terracciano’s research has shown that this affects cognition: a belief in a higher subjective age correlates with cognitive impairments and even dementia, prompting this advice:

If people think that because they are getting older they cannot do things, or cut their social ties, or incorporate this negative view which limits their life, that can be really detrimental. Fighting those negative attitudes, challenging yourself, keeping an open mind, being engaged socially, can absolutely have a positive impact.

So much can be revealed by how we talk about ourselves. How much emphasis do you place on numerical age? Do you believe age limits your physical and mental abilities? Is age an excuse for all the new things you don’t try? Do you spend more time reminiscing about what once was instead of planning on what’s to come? These questions and more are indicative of the mindset you have around age. And, as this research shows, will affect how you actually age.

Tao Porchon Lynch still keeps an active schedule, professionally and socially. Her body and mindset is indicative of her innate drive. As the home page of her website states: “In my head I’m still in my twenties, and I have no intention of ever growing up.” Even with all her accomplishments she’s still hungry for more. 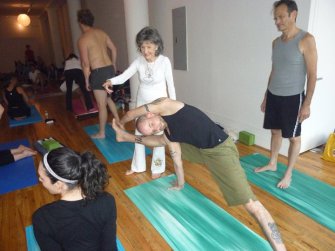 You can see Tao in the photo above, assisting me in a posture she had just flawlessly demonstrated, mere months after her wrist fracture in 2010. Fifty years from today I’ll be her age in this photo. Perhaps if I keep thinking I’m in my twenties I’ll still stretch myself into this shape. One thing is certain: if I don’t think I’ll be able to, I won’t. Mindset matters. The science is on our side.

By slowing down aging, we could reap trillions of dollars in economic benefits.
Health

Biomedical science assumes that people want to live as long as possible. They don’t.
Health

Age ain’t nothing but a number, but “inflammatory age” may be real.
Health

This discovery finally points to the source of Earth’s precious heavy elements, also proves Einstein correct in more ways than one.