Are hot dogs or hamburgers the healthier option? It’s a question that has plagued many a summer barbeque guest, and while neither is a nutritional powerhouse, chances are you’ll want to stick with the hamburger over the hot dog.

Summer barbeque season is upon us, but this year, you’ve decided to eat better and are foregoing the grill in favor of curried chicken salad tossed in a zesty yogurt dressing. Good for you! But we all know the day is coming when you’ll be invited to a barbeque, and the only salads available will be either macaroni or potato. You’re hungry, you don’t want to be rude, and now you’ve got a choice to make: the hot dog or the hamburger?

Truth is, neither one is a nutritional powerhouse when compared to your dynamite curry chicken salad, but there can be a superior choice depending on your health needs and focus. Here’s how they stack up against one another. 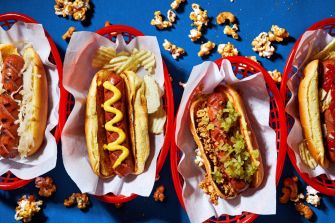 If you are worried about weight — either losing it or keeping it off — a hot dog may be your best choice. Beef hot dogs have fewer calories than hamburgers, typically in the 150 range. Pop it in an enriched white hot dog bun and add a serving-sized dollop of ketchup, mustard, and relish, and you can bump up your caloric intake to about 450.

Of course, you can make your hot dog healthier by pairing it with a whole wheat bun and fresh toppings, or choose leaner meats like chicken or turkey, but we’re going with standard barbeque fare here.

By contrast, a hamburger with a bun weights in at roughly 600 calories before toppings. With toppings and cheese, you are looking at about half your daily caloric intake before you even consider a bite of potato salad you’ve been eyeing.

Hot dogs are the clear victor this round.

Except when they aren’t

However, there are significant nutritional downsides to hot dogs. For starters, they are chockablock with sodium; the average beef frank includes a staggering 450 mg. The American Heart Association recommends no more than 2,300 mg of sodium per day for adults, so a single dog will put you in at roughly 20 percent that limit before toppings. If you’re a fan of sauerkraut on your dog, you’ll be closer to half that sodium intake.

Hot dogs are full of nitrates, too. Nitrates are salts added as preservatives to hot dogs and other cured meats, such as bacon and sausage. They are also a carcinogenic. According to the International Agency for Research on Cancer, processed meats are classified as carcinogenic to humans “based on sufficient evidence” that consumptions “causes colorectal cancer.” Red meat, like hamburger, is only a probable carcinogenic, based on limited evidence.

As Mariana Stern, a cancer epidemiologist at the University of Southern California told Time, this is true whether the nitrates are synthetic or a natural nitrate like celery juice. “Regardless of where the nitrates come from,” she said, “they can be converted by oral bacteria into nitrites, which in turn can react in the stomach … to form N-Nitroso compounds, which are well-established cancer-causing agents.”

Finally, hot dogs are small and not incredibly filling. The chances an average adult will eat just one are about as slim as the dog itself. 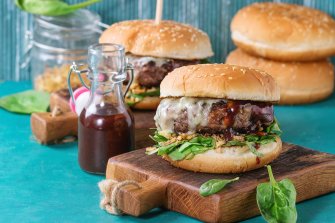 Hamburgers aren’t out of the fight yet. While they lost the calorie round, hamburgers pack way more nutrition into their patties than hot dogs. Ground beef has more protein, more iron, more zinc, and far less sodium. It also contains vitamin B12 and selenium (an antioxidant).

They typically come with healthier, fresher topping options, such fresh lettuce, tomatoes, and onions, and if your hosts chose lean ground beef, you’ll get all of these benefits plus less fat.

While you will certainly consume a lot more calories per burger, you’ll more efficiently curb your hunger thanks to that additional protein. Considering all this… it is hamburgers that are clearly the healthier option.

But hamburgers don’t get a nutritional pass. Because red meats are high in saturated fat, they have been linked to an increased risk of heart disease and high blood cholesterol. Barbequing red meat only exacerbates the concerns, because cooking such meat at high temperatures adds carcinogenic compounds.

You can lessen exposure to these compounds by choosing lean meats, not overcooking it, marinating it, and turning it frequently. You should also clean the grill frequently and thoroughly to remove those carcinogens from future cookouts. 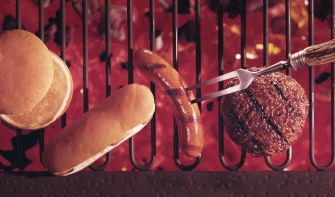 Of course, whether or not you have to worry about such health warnings will depend on your overall diet. The occasional hot dog or hamburger here or there won’t harm you or seriously increase your risk of cancer. In the Time article, Stern added that antioxidants can halt the conversion to cancer establishing agents and that studies show “processed meats might be more harmful in people with diets that are overall low in antioxidants.” Similarly, health problems crop up in people who eat red meats to the exclusion of fruits, vegetables, and whole grains.

So, whichever you choose, enjoy it. Just make sure to follow it up with a leafy green salad for dinner that night.

The first human that isn’t an Earthling could be in our lifetime.
▸
5 min
—
with
Robert Curbeam
Up Next
Technology & Innovation

What’s the difference between A.I., machine learning, and robotics?

There’s a lot of confusion as to what AI, machine learning, and robotics do. Sometimes, they can all be used together.