It’s the kind of news that makes you want to listen to “The Java Jive” by Ink Spots once again: a study has been published in Nature noting that hot coffee has been found to have higher levels of antioxidants than cold brew coffee.

Antioxidants are compounds that prevent oxidation. When cells become exposed to oxygen, it can induce a chemical reaction that create molecules called “free radicals,” molecules which are highly chemically reactive. A ‘free radical’ is a lot of things, sometimes positive (it’s necessary for life, for one), but — in the specific context of this study — it is an unstable compound that can potentially have a cascading effect on someone’s health, be it in the form of cancer, Parkinson’s, or other items of concern.

This is why a study like this is quietly encouraging: while coffee has “long been associated with indigestion, heartburn, and other gastrointestinal symptoms,” as the study notes, a review of numerous studies found “coffee consumption to be associated with decreased risk of liver, metabolic, and neurologic diseases,” amongst other decreases in cardiovascular disease and stroke.

The reason why this is — the reason why the antioxidants in coffee take the pathways that they take to subsequently produce a decrease in these particular risks — remains somewhat unclear. One suggestion put forward by the study is that “the compounds present in hot brew coffee but absent from cold brew coffee may be larger molecules with temperature-dependent solubilities” and that — in addition to the hot water extracting new compounds out of the coffee — “there may be additional compounds responsible” for the difference between hot coffee and a cold brew. 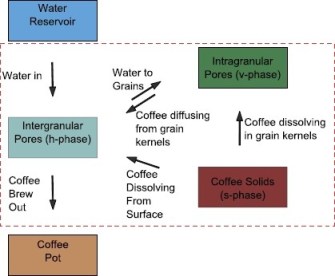 Part of what makes coffee a little bit more difficult than you would expect to study is the fact that there is space in-between the beans or grounds and there is a porousness to the grounds itself. Different kinds of water can produce different kinds of coffee irregardless of the temperature. (And then you have to consider the temperature.) Coffee beans have a shelf life in relation to their preparation and eventual use. And, what’s more, a variety of acids are produced in a cup of coffee that ‘detach from the coffee matrix’ and diffuse throughout the water as the cup cools. Coffee remains ‘coffee,’ but there is a swirl of chemical activity happening in every cup that makes the matter difficult to delineate into easily classifiable chunks.

That being said: the study suggests that there might be one potential culprit that drives the health benefits of hot coffee: the compound melanoidin, a compound “known to have antiradical properties” and which “accounts for upwards of 25% of coffee’s dry matter.”

But further investigation is warranted — perhaps over a cup of Ethiopia-Yirgz, which was found to have the highest antioxidant activity examined by the study.

Temporal lobe epilepsy seems to rewire a part of the brain that’s key to storing memories.
Up Next
Hard Science

Science confirms: Earth has more than one ‘moon’