It’s not your imagination, it turns out. Stress can turn a person’s hair gray. It’s said that if you look at before and after pictures of any eight-year U.S. president the impact of the office on hair color is clear, though in fairness, it may be that candidates dye their hair and then at some point stop doing so. Nonetheless, scientists from Harvard have not only verified the conventional wisdom on our graying noggins, but have also figured out why stress is so brutal to our follicular pigmentation.

The new research from Harvard scientists is published in the journal Nature. 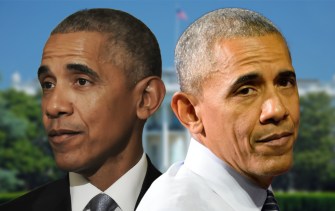 An unusual chance to see stress at work

Senior author of the study Ya-Chieh Hsu, professor of Stem Cell and Regenerative Biology at Harvard, explains what prompted her research:

“Everyone has an anecdote to share about how stress affects their body, particularly in their skin and hair — the only tissues we can see from the outside. We wanted to understand if this connection is true, and if so, how stress leads to changes in diverse tissues. Hair pigmentation is such an accessible and tractable system to start with — and besides, we were genuinely curious to see if stress indeed leads to hair graying.”

It turns out that stress activates nerves associated with our basic fight-or-flight system, and these nerves permanently damage pigment-regenerating melanocyte stem cells in hair follicles, causing them to cease production of melanin that normal provides color to hair follicles.

Hsu’s team studied the issue using mice, and was somewhat stunned at their findings. “When we started to study this, I expected that stress was bad for the body — but the detrimental impact of stress that we discovered was beyond what I imagined,” recalls Hsu.

The scientists stressed the mice using a combination of three methods: 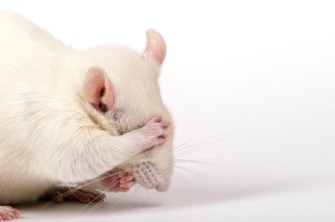 Hsu and her colleagues first suspected an immune system reaction was at the root of graying hairs only to discover that mice without immune systems still turned gray in response to stressors. The next suspect was cortisol produced by the adrenal glands — however, this proved not to be so. “Stress always elevates levels of the hormone cortisol in the body,” says Jsu, “so we thought that cortisol might play a role. But surprisingly, when we removed the adrenal gland from the mice so that they couldn’t produce cortisol-like hormones, their hair still turned gray under stress.” 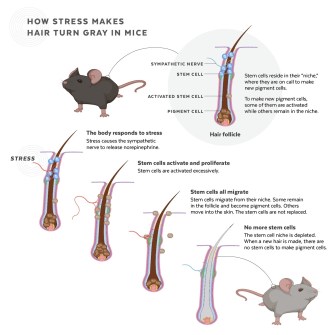 Finally, the researchers investigate the possibility that the system responding to stressors was the mice’s sympathetic nervous systems, the part of the nervous system that kicks into action with the fight-or-flight impulse. The sympathetic nervous system is a vast network of nerves that connects, among other places, to hair follicles in the skin. In response to stress, the system sends a rush of the chemical norepinephrine to the follicles’ melanocyte stem cell, causing them to quickly burn through and deplete their stores of pigment.

Say Hsu, “After just a few days, all of the pigment-regenerating stem cells were lost. Once they’re gone, you can’t regenerate pigments anymore. The damage is permanent.” Great for survival, not so good for hair color. 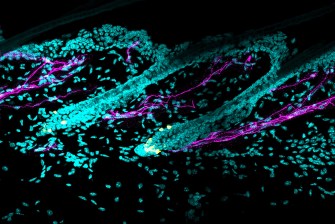 A big hint of a much greater insight

“Acute stress,” says lead author of the study Bing Zhang, “particularly the fight-or-flight response, has been traditionally viewed to be beneficial for an animal’s survival. But in this case, acute stress causes permanent depletion of stem cells.”

The research, done in collaboration with other Harvard researchers, presents a new appreciation of the effect the sympathetic system can have on the body’s cells during stress.

One of these collaborators, Harvard immunologist Isaac Chu, notes, “We know that peripheral neurons powerfully regulate organ function, blood vessels, and immunity, but less is known about how they regulate stem cells. With this study, we now know that neurons can control stem cells and their function, and can explain how they interact at the cellular and molecular levels to link stress with hair graying.”

This importance of the study therefore goes way beyond graying heads. “Understanding how our tissues change under stress is the first critical step,” says Hsu, “toward eventual treatment that can halt or revert the detrimental impact of stress. We still have a lot to learn in this area.”

The first personality tests revolved around assessing people’s reactions to ambiguous and often unsettling images. Today, the gold standard is a barrage of questions.
Neuropsych

Some U.S. intelligence operatives have suggested foreign adversaries may be using “directed-energy” weapons against Americans.
Neuropsych

Certain types of dogs seem to be more discerning than others, however.
Up Next
Health

How to survive social distancing according to science

Social distancing won’t be easy, but science shows us how to make it more manageable.