It’s one of the most fascinating aspects of the natural world: shapes repeat over and over. The branches of a tree extending into the sky look much the same as blood vessels extending through a human lung, if upside-down. The largest mammal, the whale, is a scaled-up version of the smallest, the shrew. Recent research even suggests the structure of the human brain resembles that of the entire universe. It’s everywhere you look, really. Nature reuses its most successful shapes.

Theoretical physicist Geoffrey West of the Santa Fe Institute in New Mexico is concerned with fundamental questions in physics, and there are few more fundamental than this one: why does nature continually reuse the same non-linear shapes and structures from the smallest scale to the very largest? In a new Big Think video (see above), West explains that the scaling laws at work are nothing less than “the generic universal mathematical and physical properties of the multiple networks that make an organism viable and allow it to develop and grow.”

“I think it’s one of the more remarkable properties of life, actually,” West added.

Equipped with this insight, West proposes that this may lead to breakthroughs in our understanding of how life works and our ability to enhance it. 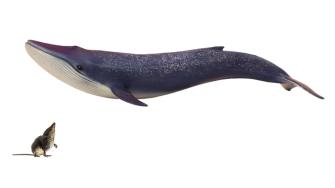 West discusses a surprising result of this scaling that relates to energy consumption. We might expect that the size of an organism and its energy requirement scale to the same degree. For instance, an organism twice the size of a mouse should need twice the energy (food). However, that’s not the case. Scaling networks upward, it turns out, consistently confers a 25 percent savings in the amount of energy required. The organism doubled in size needs only 75 percent as much energy as we would expect.

The same savings at a network level mean that larger organisms live longer, says West. This is because the organism’s internal networks, requiring less energy, wear out 25 percent more slowly. West likens the effect to a roadway whose surface eventually wears down from vehicular traffic, requiring repair. Larger, biological networks with 25 percent less “traffic” wear out more slowly, and its organism remains viable for a longer period of time.

A pill to lower body temperature 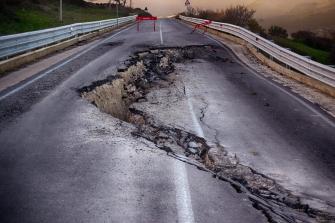 To extend human life beyond its roughly 100-year span — barring mishaps, abuse, and genetic bad luck, of course — West says there are basically two ways to go about it on the network level: “You could reduce the wear and tear, or you could increase the repair.”

To reduce wear and tear is to reduce the amount of energy our networks have to process by lowering our metabolism. West notes that eating less might accomplish this, but experimental studies have not shown that reducing caloric intake actually has much of a metabolic effect.

Another option has to do with one of humankind’s most distinguishing characteristics. Humans are homeotherms, meaning that our body temperatures remain essentially constant, minimally influenced by outside temperature. This dissociation with outside temperature has been a great survival advantage, allowing us to inhabit diverse climates, but it carries a high metabolic cost.

Making up the thermal difference takes a toll on our internal networks, says West, because chemical reactions within our bodies react exponentially to temperature. “A small increase in temperature increases your metabolic rate exponentially.” (This, West points out, is why the one or two degree increase in global temperature caused by climate change is so biologically significant.)

Keeping our bodies warm in cold weather and cool in hot weather requires a dramatic increase in metabolic rate. With this in mind, West envisions pills that lower our body temperature, thus lowering our metabolic rate, which in turn decreases the wear and tear on our networks and allows us to live longer.

A study finds that older adults who cannot balance on one foot for ten seconds have an 84% higher risk of death than those who can.
Up Next
Neuropsych

Brain-based technologies of spiritual enhancement can induce mystical experiences in many people on demand. What does this mean for spirituality today?