If you love your Fitbit, prepare yourself. This story might bring you down. A study, published in the Journal of the American Medical Association (JAMA), found that fitness trackers don’t help you lose weight. Instead, they may impede your efforts. Researchers monitored the activity and weight loss of participants for 18 months to come to these conclusions.

Previous studies hinted that fitness monitors may lead us off track. But those were small and short-term. On the surface, it looks as though Fitbit and its ilk should be helpful. More knowledge about how many calories you burn would come in handy, one would think.

According to investigators at the University of Pittsburgh, the story is far more complicated. 500 men and women between the ages of 18 and 35 who were overweight, took part in this study. Researchers recruited younger participants because they were more likely to be tech savvy and so would have less difficulty using the tracker.

Participants were weighed at the outset. They were also evaluated for their level of fitness and overall health. For the first six months, recruits ate a low calorie diet and were told to get at least 100 minutes of moderate cardio each week. Participants kept two journals, one for what they ate and another for how much exercise they got. They also attended weekly weight loss counseling sessions. 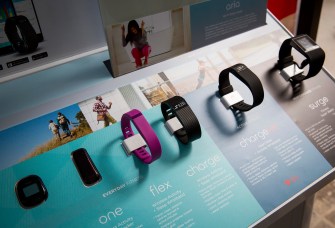 There are lots of wearable products on the market. But how much do they really help?

All participants had lost some weight by the end of the preliminary period, six months. Then, the second half of the study began. Now, researchers divided participants into two groups. One was told to log on to a website and enter in their fitness data at the end of each period of exercise. The other wore a tracker. It provided information on steps taken, calories burned, and more, and helped the dieters set achievable goals.

Participants said that they thought those wearing the tracker would lose more weight, according to the study’s lead author, John Jakicic. He is a professor of health and physical activity at the university. Over the next 18 months, participants logged their activity. Researchers would check up with each volunteer via phone, and send text messages periodically to encourage them. At the end of the study, two years in the making, participants returned to the lab to see what progress they had made.

Almost everyone had lost weight since the beginning of the study. Some had gained back a few pounds, after an initial drop. Those who had worn a monitor lost eight pounds since the beginning, on average. While those who didn’t lost an average of 13 pounds, almost twice as much. Dr. Jakicic said he and colleagues were surprised by the results. The reason for the difference wasn’t clear. 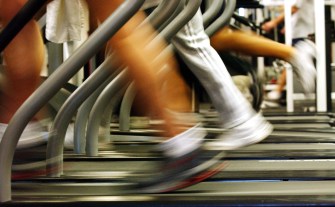 Only certain people may benefit from a wearable device, such as those who were tracking their progress, before they started wearing one.

Dr. Jakicic and colleagues still aren’t sure what happened. Using such monitors is thought to motivate people. But instead, those who wore them actually exercised less than those who didn’t. One reason may be that the tracker discouraged exercise. Users might have given up when they realized they wouldn’t reach their daily goal.

“People may have focused on the technology and forgotten to focus on their behaviors,” Dr. Jakicic said. More research must be done to flush out exactly how people are influenced by such monitors.

Weight loss of course, is a tricky subject. And some people lose weight easier than others. Some might point to genes as the main culprit. In fact, those who carry the FTO gene are known to be about 6.6 pounds (3 kilos) heavier.

However, according to researchers at Newcastle University in the UK, genetics matter very little in the reverse direction. In a meta-analysis published in the journal BMJ, researchers reviewed eight separate randomized, controlled trials, including over 9,000 participants. They concluded that those carrying the implicated gene had no more trouble losing weight than those who didn’t.

A gene may lead to a propensity toward obesity, but it doesn’t impede weight loss.

Prof. John Mathers led the study. He is a professor of human nutrition at the university. Mathers said dourly, “You can no longer blame your genes. Our study shows that improving your diet and being more physically active will help you lose weight, regardless of your genetic makeup.” It reminds us of something from High School English, from Julius Caesar, “The fault… is not in our stars. But in ourselves.”

Though it may sound like a downer, for those who have the FTO gene, it means they have the same capability to lose weight as anyone else. The main implication is that human behavior surrounding weight loss is very complicated and hard to predict. It’s even harder to steer. Studying more about behaviors surrounding weight loss may reap better results, a field of ever-growing importance as an obesity epidemic is sweeping the globe. For those struggling with weight loss, take heart. All the tools you will ever need lay right between your ears.

The biggest takeaway may be that we cannot export grit, conscientiousness, planning, or determination. We cannot put all our hope in some gadget, system, gimmick, or quick fix scheme. Instead, when it comes to weight loss, and most things, we need to be inwardly motivated, believe in ourselves, and be ready to give what it takes for the long haul.

To learn more about the fitness tracker study click here:

Eating veggies is good for you. Now we can stop debating how much we should eat.
Partnerships

Nutrisystem review: The key to losing weight—and keeping it off

Nutrisystem is a smarter weight-loss program that users enjoy.
Health

Your body image can be influenced by smells and sounds

Research finds that our sense of self can be manipulated by certain smells and sounds.
Health

Want to stop cognitive decline? Wine and cheese could help.

A new observational study finds that red wine and cheese have protective effects.
The Present

“Our mission is to completely replace the use of animals as a food technology by 2035,” said Patrick O. Brown at the 2020 Web Summit.
Up Next
Culture & Religion

The 9 Circles of Hell in Images: Dante’s “The Inferno”

A spiritual journey through the world beyond the grave, a hell, a purgatory, and a paradise is considered a masterwork of world literature.