What do you get if you combine the technologies on which the two most successful medical imaging devices — positron emission tomography (PET) and x-ray computed tomography (CT) — are based? You get EXPLORER, the stunning new scanner that can capture an amazingly detailed 3D image of the entire human body in 20–30 seconds.

EXPLORER’s super-fast capture rate — it can scan a body region in about a second — also allows it to take movies of specially-tagged medications and radiotracers as they make their way through a body. 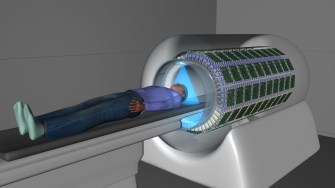 The development of EXPLORER

The first images Badawi got his eyes on were captured by UIH and the Department of Nuclear Medicine at the Zhongshan Hospital in Shanghai, and they were eye-popping. As he told UC Davis Health:

The level of detail was astonishing, especially once we got the reconstruction method a bit more optimized. We could see features that you just don’t see on regular PET scans. . . And the dynamic sequence showing the radiotracer moving around the body in three dimensions over time was, frankly, mind-blowing. There is no other device that can obtain data like this in humans, so this is truly novel. 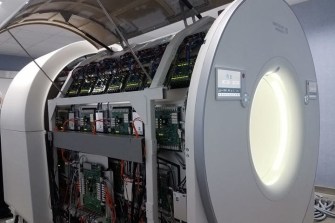 EXPLORER is 40 times as fast as a PET scanner, making it more feasible to do repeated studies on an individual, and, of course, there are the movies that can provide an unprecedented look at the in-body progress of radiotraceable agents. EXPLORER’S also 40 times more sensitive than PET scanners, so it will cause patients to be exposed to far less radiation during diagnosis than traditional PET or CT scans.

“The tradeoff between image quality, acquisition time and injected radiation dose will vary for different applications,” Cherry told UC Davis Health. “But in all cases, we can scan better, faster or with less radiation dose, or some combination of these.”

Doctors will also be able to see, for the first time, what’s happening simultaneously in multiple areas of the body, helping them measure dynamic processes such as bloodflow or glucose takeup. The uses for EXPLORER’s breakthrough technology seem endless.

The goal right now is to get the first working system up and running at the EXPLORER Imaging Center in Sacramento by June 2019. At that time, the scientists hope to begin using EXPLORER for research projects and for diagnosing patients. Meanwhile, at Zhongshan Hospital, investigation of EXPLORER’s potential continues.

Tags
medical research
In this article
medical research
Related
Hard Science
Beyond pain and pressure: 2021 Nobel Prize for medicine awards work on sensory perception
David Julius and Ardem Patapoutian were awarded the highest honor in medicine for their research into how human bodies make sense of and respond to the outside world.
Surprising Science
What happens when two different respiratory viruses infect the same cell?
A new study looks at what happens when you get infected with two viruses at the same time.
Health
Barnacles inspire a blood-repelling tissue glue for sealing wounds faster
MIT researchers design glue that mimics the sticky substance barnacles use to cling to rocks.
The Present
MIT engineers design touch-sensing glove that ‘feels’ pressure and maps stimuli
The design could help restore motor function after stroke, enhance virtual gaming experiences.
Health
Yes, the maximum life span will increase this century, but not by more than 10 years
The risk of dying basically flattens after age 110.
Up Next
Hard Science
Whale earwax reveals 146 years of humanity’s impact
Thanks to museum curators, there’s no shortage of the stuff.