If you’ve attended high school, you can probably remember filling in a Punnett square during a biology class. It was the simple diagram that could not only make you feel like a knowledgeable budding geneticist, but could also help you figure out the probability of your kids having blue eyes in the case the cute classmate you had a crush on agreed to live with you happily ever after. 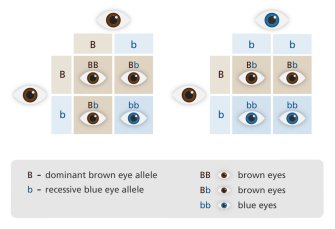 The Punnett Square is a visual representation of Gregor Mendel’s laws of inheritance. They are three and they posit that 1) alternative forms of a gene (allele pairs) separate randomly during the production of an egg or sperm (gametes), so that each gamete only carries one form of the gene; 2) each pair of alleles segregates independently of other pairs during the formation of an egg or sperm; 3) the genotype of an individual is made of many alleles (after a random pairing of an egg and a sperm, each of which carries a random form of the gene), and the phenotype of an individual (the visible expression of the genotype) is determined by the dominant alleles and the environment.

What underlies all of Mendel’s laws is the idea of randomness. Scientists believe that it is up to chance which sperm will fertilize an egg and which combinations of alleles the offspring would have. That is, of course, after the sperm has proven itself to be the strongest and most enduring swimmer of them all. But the point is, the egg has no say in this. It sits passively waiting to be fertilized.

This whole narrative, including Mendel’s laws, may be about to change. Dr. Joseph H. Nadeau, principal scientist at the Pacific Northwest Research Institute, has found evidence that suggests eggs and sperm don’t always combine randomly, but in fact the egg may choose which sperm to fertilize it. The findings have been published in Genetics.

Nadeau was tipped off by two experiments from his own lab which were supposed to produce specific predictable ratios of gene combinations in offspring (based on Mendel’s laws), but they didn’t. It actually turned out that certain pairings of genes are much more likely than others in the cases when the mother carries a particular gene.

When the mother carried the two versions of Dnd1, the distribution of the genes in the offspring followed Mendel’s laws but when the father did, the math went entirely off. Instead of finding the expected 75 percent of offspring to carry at least one of the mutant genes, they found that only 27 percent of the offspring did.

After eliminating other possible explanations for the unlikely ratios, like embryonic death, Nadeau concluded that fertilization must not have been random and there must be a mechanism that allows the egg to choose the sperm with the normal instead of the mutated gene. He calls it genetically biased fertilization.

“It’s the gamete equivalent of choosing a partner,” Nadeau says for Quanta Magazine. “We’ve been blinded by our preconceptions. It’s a different way to think about fertilization with very different implications about the process of fertilization.”

The mechanism of how the egg may decide which sperm to let fertilize it is still unclear. There probably are secreted and cell-surface factors in female reproductive organs that could control access of sperm to eggs based on their genetic content. Nevertheless these findings shed a new light on the female and her reproductive system, which as it turns out, has a much more active role in choosing a partner or a sperm cell and influencing the genetic composition of her offspring.

For more on the topic check out Quanta Magazine.

Tags
biologyeggfalse narrativefertilizationgeneticsMendel's Lawsoffspringovumreproductionspermstrong swimmer
In this article
biologyeggfalse narrativefertilizationgeneticsMendel's Lawsoffspringovumreproductionspermstrong swimmer
Related
Thinking
Lobsters don’t die from old age — they die from exhaustion
Being mortal makes life so much sweeter.
Neuropsych
The life-long psychological effects your first love has on you
If love is an addiction, your first love is the first dose.
Life
Awareness of death and other incredible examples of animal intelligence
Elephants mourn the dead, dolphins give names to each other, and insects can recognize faces. The animal world is much smarter than we think.
Surprising Science
What really happens when your foot goes to sleep?
Pins and needles, anyone?
Life
The secret to how scorpions, spiders, and ants puncture tough skin
These animals to grow scalpel-sharp and precisely shaped tools that are resistant to breaking.
Up Next
Thinking
Is Philanthropy Driven by the Human Desire to Cheat Death?
George Bernard Shaw quipped that a rich man ‘does not really care whether his money does good or not, provided he finds his conscience eased and his social status improved by giving it away’. Was he right?