An older person’s cognitive health is not always obvious. Cognitive impairment and dementia manifest gradually over time, and a person may be unaware of their advance. During this subtle transition, such a person may continue living as they always have, going about their business at home and behind the wheel. But this could lead to a dangerous car accident.

So, researchers from Columbia University have announced the development of AI algorithms that can detect mild cognitive impairment and dementia in older people based on the way they drive. The authors report in the journal Geriatrics that their algorithm is 88 percent accurate.

The algorithms the researchers developed were based on a common AI statistical method involving “decision trees” that form a “random forest model.” The most successful algorithm, according to lead author Sharon Di, associate professor of civil engineering, was based on “variables derived from the naturalistic driving data and basic demographic characteristics, such as age, sex, race/ethnicity and education level.”

Decision trees are often used in memes in which answering “yes” or “no” regarding some attribute leads you down a path to another question, which in turn ultimately leads to a final conclusion.

Data used in the study

The algorithm was developed using data sourced by the Longitudinal Research on Aging Drivers (LongROAD) study sponsored by the AAA Foundation for Traffic Safety. It came from in-vehicle recording devices that captured the driving behaviors of 2,977 participants from August 2015 through March 2019. At the time the project began, the motorists’ ages ranged from 65 to 79 years. From the raw data, the authors of the new study derived 29 behavioral variables, which they used to develop cognitive profiles of the drivers. 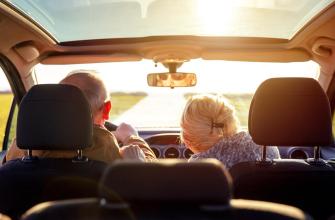 The researchers then developed a series of machine-learning models to predict cognitive issues, with differing success rates. While models based on driving variables alone were just 66 percent accurate, and demographic models less so at 29 percent, using both models together produced an accuracy rate of 88 percent.

The researchers also explored the validity of individual factors as predictors of cognitive issues. In order of most reliable to least reliable, they were: (1) age; (2) percentage of trips traveled within 15 miles of home; (3) race/ethnicity; (4) minutes per round trip; and (5) number of hard braking events.

Li is hopeful that his team’s work can help keep roadways and older drivers safe. “If validated,” he says, “the algorithms developed in this study could provide a novel, unobtrusive screening tool for early detection and management of mild cognitive impairment and dementia in older drivers.”

Being mortal makes life so much sweeter.
Up Next
Thinking

The nomological argument for the existence of God

Regularities, which we associate with laws of nature, require an explanation.