The turkey is one of the closest living relatives to avian dinosaurs, but recent evolutionary turns has taken it from peak predator to meek entrée. Americans kill about 45 to 46 million turkeys in preparation for Thanksgiving, and to really rub it in, our nation’s leader pardons one every year as a lark.

But ignominy doesn’t stop there. Through selective breeding, we’ve dramatically increased the size of turkeys, particularly in the breast for more of that coveted white meat. This has led to all sorts of health issues, including skeletal problems, cardiac morbidity, and reduced immune response. Thanks to those robust breasts, domestic turkeys can’t mate anymore and rely on us for artificial insemination.

If that wasn’t bad enough, every year after we’ve feasted on millions of these birds, we then blame them for making us miserably tired. We’ve even developed a term for it: the turkey coma, the “inevitable and unavoidable nap that occurs about 45 minutes after gorging one’s self on a Thanksgiving Day turkey,” as one Urban Dictionary user defined it.

But are turkeys really to blame for the turkey coma? And if so, how do they manage this posthumous revenge? 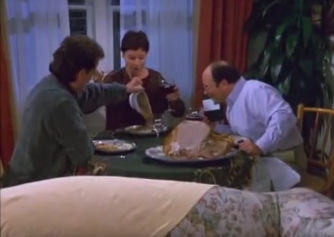 Jerry and George use a turkey’s tryptophan to make Celia fall asleep in the episode “The Merv Griffin Show.”

As any Seinfeld fan can tell you, that stuff in turkey that makes you sleepy is tryptophan. Specifically, L-tryptophan, an essential amino acid that our livers synthesize into niacin. Niacin, in turn, helps create the neurotransmitter serotonin.

Our brains and bodies use serotonin for many functions. It plays a role in appetite, emotional stability, motor skills, and cognitive processes, but it’s most famous for regulating our body’s sleep-wake cycles. This common knowledge serves as the basis for the belief that turkey makes you sleepy.

Thing is, a lot of foods contain tryptophan. Nuts, soy, eggs, milk, salmon, chicken, spinach, yogurt, and chocolate are all dietary sources of tryptophan, with many of them containing more tryptophan than our favorite holiday fowl.

According to My Food Data, turkey has 404 milligrams of tryptophan per 100 gram serving. But in the same serving size, pumpkin and squash seeds have 576 milligrams, soybeans have 575, and reduced fat mozzarella has 571. None of these is associated with drowsiness, and nuts are a go-to for an afternoon pick-me-up snack.

Either turkey is being unfairly maligned or something else is weighing down our eyelids after a Thanksgiving meal.

While Seinfeld may have exaggerated the effects of tryptophan, the show did get one thing right. If you want to put your girlfriend to sleep so you can play with her antique toy collection, a calorie-laden meal of turkey, heavy gravy, and a whole box of red wine will do the trick.

Americans consume a lot of calories during a Thanksgiving meal. This isn’t news but the numbers, once laid bare, can still be guilt-inducing. The Calorie Control Council estimates that the average Thanksgiving meal weighs in at 3,150 calories, but it’s worth noting that their estimate uses sweet tea as a beverage benchmark and not beer, wine, or cocktails.

Dietitian Tanya Zuckerbrot told Fox News that a turkey day dinner ranges between 3,000 and 4,500 calories. Like the Calorie Control Council, her estimate does not include alcoholic drinks, but she also skipped on appetizers.

Obviously, these numbers vary depending on the food available and serving sizes. But any estimate will have one thing in common: a single meal sporting well over the USDA recommended daily caloric intake for all demographics outside of Olympian athletes. 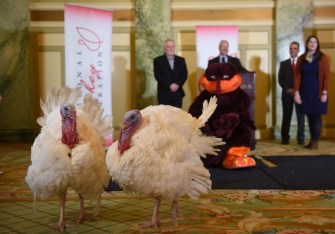 Two male turkeys named Peas and Carrots sent by the National Turkey Federation (NTF) to the White House are seen before the upcoming annual turkey-pardoning ceremony on November 19, 2018 in Washington, DC.

And this is why the term “food coma” is much more apt — or, if you want to get clinical, “postprandial somnolence.”

“We’ve known for many years that meals with an imbalance of nutrients — that are rich in either fats or carbohydrates — are associated with feeling sleepy,” writes Angus Steward, senior lecturer of nutrition and dietetics at Edith Cowan University. “But this is not the case when nutrients are balanced or the meal is rich in protein.”

When we start our Thanksgiving meal, our stomachs begin producing a hormone called gastrin. Gastrin kickstarts the digestive process, which reroutes blood to our stomachs to carry away the newly formed nutrients.

Part of the drowsiness is due to the volume of food you consume. It simply takes longer to digest, requiring your body to take it easy while it diverts blood from other bodily functions. But as Steward explains, it isn’t just volume at work here. It’s also what we eat.

Thanksgiving meals are heavy in fats and carbohydrates. Carbs release glucose into the bloodstream quickly, causing a spike in insulin production. Insulin helps the body absorb the glucose, but in doing so, it makes it easier for tryptophan to pass the blood-brain barrier. Once tryptophan is in the brain, it begins conversion to serotonin to tell your body it’s time to sleep.

With your body and mind at rest, your body can get to work absorbing the massive meal.

That’s the bad news if you still have a daunting pile of dishes to clean Thanksgiving evening. The good news, as the National Sleep Foundation points out, is that you can use your newfound understanding as a little bio-hack. Eating small bedtime snack that contains both carbs and tryptophan, such as peanut butter on toast, can help you ease into a restful night’s sleep.

So, the myth is partially right; turkey does have a role to play. It and many other Thanksgiving favorites provide you with ample tryptophan. When combined with an overall high-calorie meal and enough stuffing to carb-load for a marathon, the result is a mid-afternoon snooze.

But the turkey is hardly the sole cause of anyone’s sleepiness. If anything, we only have ourselves to blame and can stop blaming it for those decisions. And even if turkey did make us sleepy, let’s face it: it has far more grievances against us than we do against it.

Evolutionary game theory could tip the advantage to medicine.
Life

Genetic profiles of many dog breeds appear as if siblings mated.
Health

Inventions: 7 ways to come up with money-making ideas

Learn how to enter into the mindset of a successful inventor.