The list of excuses quickly piles up. It’s genes—there’s nothing I can do about it. No, it must be that I’m big-boned. I have a slow metabolism. That’s always a winner, if for no other reason than that the science of metabolism remains murky.

I know such defense mechanisms well; I used them all growing up overweight. There’s not much else a kid can do. You repeat the sentiments of your parents, who are likely trying to soften the social abuse you receive at school with their limited understanding of “science,” which is mostly pulled from copies of People and hearsay among peers.

I haven’t been overweight since high school, when during my freshman year I miraculously grew eight inches. By twenty, I topped out at 6′ 3″ while roughly weighing the same as I did a foot shorter. Something genetic was going on, certainly: one side of my family is predominantly overweight, the other not at all. Yet I’ve had to stay consistent in my eating habits, as I’ve witnessed too many family members wildly fluctuate through the years.

Like Vox senior health correspondent Julia Belluz, I watched friends eat junk food for years and still maintain six-pack abs. I exercise six days a week to achieve a form many don’t have to work for. It’s easy to pin this on metabolism, but as Belluz writes, that doesn’t look to be the case.

In general, we have terrible methods for measuring obesity. Our system of the body-mass index (BMI) offers vague approximations at best. I’ve watched many people freak out over what their new trainer tells them based on flawed mathematics. But better measurements exist. Belluz spent a day inside one of the planet’s thirty metabolic chambers, located at the National Institutes of Health Clinical Center. These chambers are the gold standard for understanding metabolism. As she writes,

They’ve furthered our understanding of obesity, metabolic syndrome, and diabetes—diseases that are now among the greatest threats to health worldwide—by letting researchers carefully track how individual bodies respond to the calories they’re offered.

Metabolism isn’t one thing, but a series of cellular chemical transformations. The purpose of metabolism is to convert food into energy and building blocks for proteins, nucleic acids, lipids, and some carbohydrates, as well as to eliminate waste. The metabolic process encompasses digestion and the transportation of fuel around the body.

The process involves both the breaking down and building up of substances through a number of metabolic pathways. As the external environment is constantly changing, these pathways must be constantly regulated to keep our bodies in homeostasis. This conversation between our environment and metabolic pathways allows our bodies to maintain a relatively stable internal temperature.

We utilize calories in three ways, Belluz writes. First, to keep all of our cells operational (basal metabolism); second, to break down food; and finally, to provide the energy we use for any physical activity. The basal metabolic rate takes up the lion’s share of this fuel: 65-80%. Since digestion only requires roughly 10% of our calories, the last 10-30%, depending on how much you move, is used up by physical activity.

This is in stark contrast to how we view metabolism and obesity socially. In the fourteen years I’ve taught group fitness at Equinox, I’ve stumbled into every possible quick-fix weight loss protocol, pill, shake, mindset, and magic-mushroom elixir imaginable. I’ve lost count of how many members believe their workout is “burning off” the junk they ate the previous day. And people still somehow think juicing—aka mainlining sugar—is healthy. 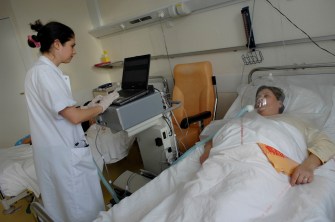 An indirect calorimetry examination at the University Hospital of Bordeaux. This technique is used to calculate the calories burned by a living organism through measuring the amount of oxygen it consumes.

Photo By BSIP/UIG Via Getty Images

Belluz, who has also combated weight issues, was surprised to discover the results of her chamber visit: she’s perfectly healthy. Along the way she debunks current myths, such as the fact that brown fat isn’t going to help you shed pounds (sorry Wim Hof fans), the keto diet isn’t sustainable, you’re not burning as many calories as advertised in Soul Cycle—Belluz’s three, thirty-minute sessions only burned 405 calories, just 17% of the day’s total calories—and, perhaps most importantly, your metabolism isn’t likely to cause obesity:

The chamber has also shown that while some people have a “slow metabolism” relative to others their size and age, this isn’t a major cause of obesity. And despite the focus on “metabolism boosting” for weight loss, there’s nothing money can buy that will speed your metabolism up in way that will lead to substantial slimming.

The next time you’re about to drop fifty dollars on a box of Cordyceps powder (derived from a parasitic fungus) or listen to anything Goop has to offer about weight loss, you’re participating in yet another round of nutritional capitalism. The minor metabolic variations we have is not going to cause those six-pack abs (and you don’t necessarily want them anyway).

As Belluz concludes, obesity is a complex phenomenon that involves socio-economic status, stress levels, access to affordably healthy food, and so much more. While researchers continue to seek a silver bullet to combat the obesity epidemic, we’re not likely to find it anytime soon. One thing that’s now clear, though, is to stop using the myth of metabolism as a crutch.

Becoming less physically active as you get older is not inevitable.
Up Next
Health

It turns out the human scalp has an olfactory receptor that seems to play a crucial role in regulating hair follicle growth and death.