This article was first published on Big Think in March 2017. It was updated in January 2023.

The United States of America was ranked the 19th happiest country in the world in 2016 in the World Happiness Report. A part of America’s unhappiness can be linked to the social structure of the country.

Being American means culturally striving to be the best and going to great pains to differentiate yourself as unique. It is not enough to be on the basketball team in high school, instead you have to be the MVP. It is not enough to get straight As, but you should also take all of the AP and IB classes, and have as many extra-curricular activities as possible at the same time. It’s not enough to work at a large business, you also strive for that cozy CEO position and start that ladder-climb early.

What does that have to do with happiness? Take a look at Denmark, repeatedly voted as the world’s happiest country (although it has just been knocked back to second place in the 2017 World Happiness Report). Denmark’s social structure is very different to that of the US. Danes tend to believe in something called Jante Law, which has 10 rules all around the idea of accepting the average. Quartz reports that Jante Law is everywhere in Denmark, even if no one is discussing or admitting it. In online comic Scandinavia and the World, the character of Denmark has been consistent in its exemplification of Jante even though it’s never named as such.

Jante persists in the culture in every way and, according to Ourhouseinaarhus, even affects the school system. There is no competitive school system, no advanced programs for gifted learners. The schools must all be equal, and the students must help each other rather than vie for ‘the best.’ There are no rewards program, no trophies for the students who graded better. As the blogger commented, the Danish children learn early on about Jante.

The laws themselves are simple. They all encourage the idea that you are average, and that’s just fine.

1. You’re not to think you are anything special.

3. You’re not to think you are smarter than we are.

4. You’re not to convince yourself that you are better than we are.

5. You’re not to think you know more than we do.

6. You’re not to think you are more important than we are.

7. You’re not to think you are good at anything.

9. You’re not to think anyone cares about you.

10. You’re not to think you can teach us anything.

The laws, when written out, are meant to look horrifying and quite intimidating. They come from a book written by Aksel Sandemose, and he was trying to satirize what it was like in Scandinavian small towns in his novel A Fugitive Crosses His Tracks (En Flyktning Krysser Sitt Spor). When Sandemose named that town Jante, he gave name to something that already existed in practice in Scandinavia.

While the idea of Jante Law is culturally relevant, according to Lindsay Dupuis, a therapist in Copenhagen, it’s not discussed in everyday life as a conscious practice, rather it’s lived out — talking about it seems redundant. Why discuss oxygen intake when you were born breathing it? It materializes like this: nobody brags when their child is named number one in their math class. They don’t talk about who gave the best speech at their work function, or discuss who’s been promoted most at work. This is not to say that the Danes are not ambitious, they’re just as ambitious as everyone else. They just don’t brag about it, or stress over doing more.

“By definition, most of us are average,” remarks psychologist Madeline Levine in her Big Think discussion of the topic. By the very principle of the word average, most of society falls somewhere between worst and best, and struggling against that only leads to anxiety. It’s by no means futile to try, but intentions matter — do you want to achieve something, or do you want to beat someone else at their achievement? As Alain de Botton writes in Status Anxiety: “Anxiety is the handmaiden of contemporary ambition.” 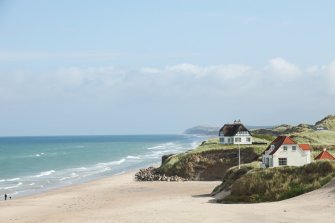 Psychologist Barry Schwartz has commented on this very thing. He’s stated in his book, The Paradox of Choice: Why More is Less, that it is necessary for a person’s mental health to accept the average, the ‘good enough.’ This is necessary because it may be impossible to know if ‘the best’ is ever reached, and often, perfection is unattainable. It may be impossible to know if one had the best score, but it is easily understood if the score was good enough. It is impossible to quantify if one is the best musician, but good enough is well within reach. Schwartz has pressed that psychologically speaking, this continued push to rise above average has negative consequences on mental health.

This means that Jante is, psychologically speaking, a far healthier way of thinking. To accept an average life means that one would get more satisfaction from it. To accept the ‘good enough’ means that one would have a far better experience with it. In addition, the Danish also have hygge which is, according to The New Yorker and Oxford Dictionary, the concept of being cozy and comfortable as a way of creating the sense of health and happiness. The Oxford Dictionary even reports that hygge is a defining quality of the Danes. That, plus the 10 rules of Jante Law, all add up to the low-stress environment that is Denmark. By slipping into something a little fleecier, and lowering your expectations you will occasionally find yourself pleasantly impressed when those expectations are outdone. All it takes is a sense of being good enough to be comfortable and cozy in life: Jante and hygge.

Tags
emotional intelligencephilosophypsychology
In this article
emotional intelligencephilosophypsychology
Related
The Present
4 lessons from Bhutan on the pursuit of happiness above GDP
The Himalayan Kingdom best known for its concept of “Gross National Happiness.”
Surprising Science
A Year of Praxis: What Philosophy Teaches Us About Politics, Rationality and the Pursuit of Happiness
“The owl of Minerva,” Hegel wrote, “takes its flight only when the shades of night are gathering.” A year ago I launched Praxis as a forum for thinking reflectively about […]
Neuropsych
Can’t buy me meaning? Money cuts a quicker path to happiness
In the pursuit of happiness, money probably trumps meaning.
Hard Science
Cheers! How the physics of fizz contributes to human happiness
The phenomenon that makes our favourite drinks bubbly is, alarmingly, the same one that causes decompression sickness in divers. Why do we still love it?
Thinking
An end to suffering: 10 quotes on Buddhist philosophy
It’s not what you have, it’s what you do with it.
Up Next
Hard Science
The 12 most exciting space missions of 2023
2023 will see the launch of new rockets, the return of OSIRIS-REx, and a mission to Jupiter that could help us find extraterrestrial life.