There have been many comparisons between the COVID-19 pandemic and previous historical incidents. Obviously, the last great flu pandemic of 1918-19 has been receiving a lot of attention. There’s also quantitative comparisons. Pundits compare this pandemic death toll to wars and terrorist attacks. This week, America surpassed the death toll in Vietnam. In previous weeks, rates were compares to the War in Afghanistan and 9/11.

Comparing a virus to a war isn’t fair, though the headlines can be forgiven. We’re trying to wrap our heads around the enormity of tragedy. One feature of consciousness is qualia, instances of subjective experience. In order to understand something—say, a glass of wine—we relate to it by stating “this is like this.” This Bordeaux smells like peppercorn and chocolate. Comparison gives us a point of reference in an effort to understand concepts. We do it with everything.

While death tolls are one thing, conditions on the ground are entirely different. Consider 9/11. During the months following that day, New Yorkers were more likely to say hello to random passerby on the street. There was an uptick in kindness and charity. People were present for one another on an unprecedented scale. There was a real feeling of “we’re in this together.”

Feeling like you’re a part of something requires presence, which is exactly what’s lacking as we shelter at home. Even on 9/11, as I walked from downtown Manhattan to my girlfriend’s apartment in the Upper East Side—I lived in Jersey City and had no way of returning home—I would stop to talk to people on the street. We were able to look one another in the eyes. Life was briefly upended, sure, but we could still physically be there for one another. We could even touch each other.

Why loneliness is a danger to individuals and societies | Andrew Hornwww.youtube.com

Lack of contact is driving loneliness during this pandemic. Health care workers are experiencing an increase in mental health conditions. Being on the front lines is emotionally taxing. But those forced to shelter at home, especially when living alone, are also facing increased anxiety and depression.

An avoidance of social contact is an evolutionary mismatch, argue three researchers in a recent essay published in the journal, Current Biology. Evolutionary biology dictates that we come together during times of crisis. We’re social animals. The inability to make contact is frustrating and leads to trauma as self-isolation persists.

The authors (Guillaume Dezecache, Chris Frith, and Ophelia Deroy) write that the media is driving narratives counter to natural behavior. During tragedies, we tend to want to help others more than take care of ourselves. Empathy is our biological inheritance. The media, they write, has adopted a Hobbesian view of the world: every man for himself.

The focus on irrational hoarding of supplies is one example. While running from a fire is a natural reaction to danger, they note that our intuitive responses are cooperation, not selfishness. News outlets perpetuate problems by homing in on aberrant behavior. In fact, they drive the problem. We believe supplies are running short, creating this Hobbesian mentality: I must hoard as well.

This mindset seems worse in cities. As they write,

“In all likelihood, the mismatch between our misperception of the severity of the threat and its consequences is likely to become even more destructive in dense urban areas in which social isolation is a costly good.” 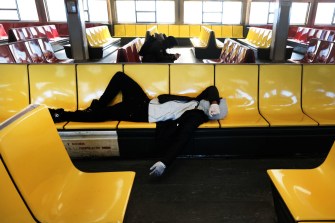 A man rests on an empty Staten Island Ferry on March 24, 2020 in New York City.Photo by Spencer Platt/Getty Images

Then there’s the flip side: refusing to social distance or shelter at home. Because the threat is invisible we tend to downplay the risks. This is in stark contrast to 9/11, in which more fearful minds associated any Muslim with terrorism. Fortunately, this trend was relatively rare in New York City, though anti-Islam sentiments exploded across the nation, usually in regions with less diverse cultures.

Sine we cannot see this virus, and therefore don’t necessarily understand how it’s transmitted or concern ourselves much if we’re not in a high-risk group, we don’t take precautions. The short-term benefit of contact might, however, fuel the long-term detriment of increased hospitalization and death.

Nonchalance isn’t the only reason for such behavior. It might be something much more ingrained in us.

“It is because our infection-avoidance mechanisms are overwhelmed by a much stronger drive to affiliate and seek close contact.”

As the authors conclude, the more we can stave off loneliness for the greater good of society—at-risk populations, such as the elderly and immunodeficient; health care workers; supply chains providing hospitals with necessary resources; workers contracted to produce those supplies—dictates how we emerge on the other side of this pandemic.

Sadly, there is no easy response. Collectively we’re facing a range of terrible outcomes. The best we can do is strive for the least tragic result. We passed 60,000 deaths in America today. How high that number climbs is in large part in our hands, yet keeping it low requires anti-instinctual behavior. That conundrum is shaping what our society will look like in the future.

If you want to escape the negativity, head to Kazakhstan.
The Learning Curve

Escape the perfectionist trap with the Japanese philosophy of “wabi sabi”

Perfectionism is on the rise, and its consequences for mental health can be devastating. The Japanese philosophy of “wabi sabi” can help.
The Learning Curve

Our overworked society has created a bunch of adrenaline junkies

A surprisingly strong link between altitude and suicide in the U.S.

Living at a higher elevation is a double-edged sword.
Up Next
Neuropsych

In order to gain more from spending time alone, it is important to be open to the benefits that solitude can bring.