Space exploration is an essential enterprise for humanity. We need to go deeper into space to understand more about our planet and the universe, to pinpoint potential new homes in case this one goes kaput, to find new resources for mining metals and minerals, and maybe even to locate some intergalactic brothers and sisters. The space program has led to the development of new technologies and has been a source of hope for most of humankind. But with every scoop of extraterrestrial soil our rovers dig up, come some fears.  The scoop could contain alien bacteria that might thrive here on earth in ways that are unexpected, unknown and possibly very deadly.

We could potentially have no immunity to extraterrestrial microbes. They could quickly wipe out large chunks of the human population, like a modern-day Black Plague. And that’s not the only threat.  Such bacteria could go after animals, plants and earthly microbes. Our food sources could be gone before we do. 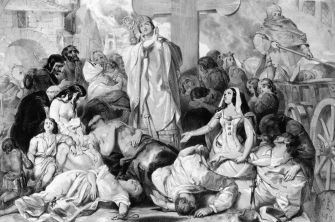 The encounter between us and aliens or alien bacteria could be similar to what happened to Native Americans when Europeans arrived in the 15th century. Over 95% of possibly 54 million people were killed due to lack of immunity to such illnesses as smallpox and flu.

NASA and other space agencies instituted decontamination programs to make sure the samples are quarantined. The international Outer Space Treaty of 1967 states in its article IX that “States Parties to the Treaty shall pursue studies of outer space, including the Moon and other celestial bodies, and conduct exploration of them so as to avoid their harmful contamination and also adverse changes in the environment of the Earth resulting from the introduction of extraterrestrial matter and, where necessary, shall adopt appropriate measures for this purpose.” 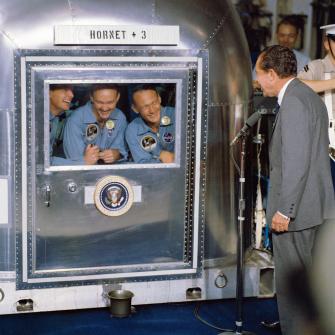 The crew of Apollo 11 in quarantine after returning to Earth, visited by Richard Nixon. 1969. Credit: NASA.

But back contamination practices like quarantines and all types of sterilizations have their own limitations, as what they are looking for is limited to what we know to look for. An unknown life form would behave unknowingly. While no sample from Mars has ever been brought back yet, the 2020 NASA Rover mission is planning just that. And for that, NASA is planning to build special facilities for studying the samples, possibly staffed by robots.

So could aliens wipe us out?

Whether one is afraid or hopeful in relation to potential extraterrestrials perhaps depends on one’s character, general outlook on life, and level of knowledge. Stephen Hawking is famously pessimistic on the subject, thinking that not only are aliens likely to wipe us out, they will probably think of us the same way we think of bacteria.

Others, like Neil deGrasse Tyson are more positive. Tyson thinks we are not likely to catch a disease from aliens because they would be completely different from us, the same way we don’t catch illnesses from trees. “The more remote a species is genetically from you, the less likely they’re gonna have a disease that can jump to you”. And aliens would be completely removed since they would have evolved on a different planet.

Also out there is the theory of panspermia, which claims that life on Earth could have begun from bacteria brought onto the planet by comets or meteors from outer space, maybe even Mars itself. This could have happened by accident or even intentionally, whereby intelligent lifeforms from outer space sent bacteria to Earth to generate or transfer life. So we might be aliens ourselves.

A team of researchers concluded that some terrestrial algae could survive space travel, concluding that the panspermia theory is not necessarily farfetched.

Could alien diseases already be here?

There have been many theories without significant proof that attributed such diseases as the plague, ebola, mad cow disease and even flu pandemics to Earth’s contamination by objects from outer space. 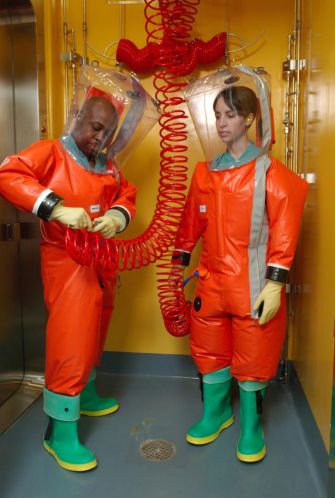 Centers for Disease Control microbiologists are shown in this 2007 photo in the process of suiting up to access the interior of the organization’s Biosafety Level-4 (BSL-4) laboratory. Credit: CDC

There is also the curious case of Morgellon’s disease, a condition suffered by tens of thousands of people around the world who believe there are tiny bugs and string-like objects living under their skin. The controversial condition has no known cure, and as is often the case when science doesn’t provide a satisfactory answer, conspiracy theories thrive in explaining the origins of Morgellons. While there are possible earth-bound answers, some attribute the disease to alien pathogens that contaminated Earth via meteors or even the Genesis mission, which returned outer space samples. 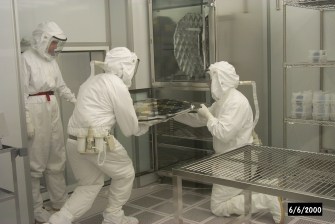 The most famous sufferer of Morgellon’s is the singer Joni Mitchell, who has described her illness as a “weird, incurable disease that seems like it’s from outer space.”  Mitchell’s hospitalizations in 2015 brought the illness to media’s attention. It’s fair to say that most within the medical profession attribute the disease more to a psychological condition rather than actual manifestation of alien bugs, but it wouldn’t be the first time people dismissed something they couldn’t effectively explain.

A new device cured the hiccups 92 percent of the time in a recent study involving more than 200 participants.
Health

“The question is which are okay, which are not okay.”
▸
14 min
—
with
Big Think
The Present

A team of scientists managed to install onto a smartphone a spectrometer that’s capable of identifying specific molecules — with cheap parts you can buy online.
Health

For every good idea in evolution, there is an unintended consequence. Disease is often one of them.
Life

A newly discovered coronavirus — but not the one that causes COVID-19 — has made some dogs very sick.
Up Next
Technology & Innovation

How Virtual Reality Will Change the Face of Healthcare

VR is Poised to Change Many Facets of Healthcare. Find out How.