Electrically stimulating a certain part of the brain seems to reliably produce laughter, smiles and calm feelings, according to a new study published in The Journal of Clinical Investigation.

It’s known that stimulating certain parts of the brain can cause laughter, but this is the first time scientists have identified one that seems to also reduce anxiety when stimulated. The findings could lead to better treatments for anxiety, depression and chronic pain.

The discovery comes from a research team, funded by the National Institutes of Health, that was studying epilepsy patients undergoing electrical stimulation brain mapping, a process in which tiny electrodes are placed onto the brain. These electrodes can stimulate various regions of the brain to provide information about the neural source of seizures.

In observing a 23-year-old female patient, the team observed that stimulating the cingulum bundle — a white matter tract that connects various brain regions — consistently caused her to laugh uncontrollably, smile and feel calm and relaxed, according to the NIH Director’s Blog. To measure her mood more objectively, the researchers asked her to evaluate a set of facial expressions as happy, sad or neutral. She rated faces as happier when undergoing electrical stimulation, a sign that suggests she was in a better mood. The team also measured her cognitive abilities at the time, finding that electrical stimulation didn’t seem to be interfering with cognition.

To bolster the findings, the team examined two other epilepsy patients, who were also undergoing brain mapping for treatment, and found that stimulating the cingulum bundle again triggered laughter, smiles and calm feelings. 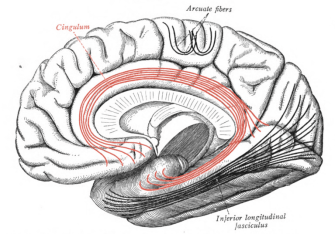 ​Why does this part of the brain cause laughter and calm feelings?

It’s too early to tell, but study co-author Jon T. Willie told the NIH Director’s Blog that it might have something to do with the tract’s role as an intermediary between other brain regions — he likened it to “a super highway with lots of on and off ramps” and suspects it “lies at a key intersection, providing access to various brain networks regulating mood, emotion, and social interaction.”

​How could this kind of stimulation be used?

It’s possible this kind of electrical stimulation could be used to improve treatments for anxiety, depression and chronic pain. Interestingly, stimulation could also help people have a more pleasant experience during neurosurgeries where patients must stay awake — the team actually did this with the 23-year-old patient, finding it provided her immediate relief each time she became stressed.

However, it’s important to note that the kind of therapy described in the study requires invasive surgery. That’s because it involves an electrocorticogram (ECoG), which, unlike a electroencephalogram (EEG) where electrodes are placed onto the scalp, involves opening the skull to place electrodes directly onto the brain. As such, it’s unlikely that these kinds of treatments will soon be readily available options for people suffering from, say, generalized anxiety disorder. But as technology improves it’s possible we might see similar therapies offered through less invasive means.

Will nature or nurture win out?
Neuropsych

A happiness expert explains why.
Neuropsych

One form of domestic abuse involves a parent breaking their child’s connection with the other parent.
Health

Understanding these links could bring us closer to a cure.
Up Next
Thinking

The man’s a walking disaster

Jamie Aten is an expert on the science of dealing with Really Bad Things.