The pharmaceutical industry’s top earners are cancer drugs — a sentence that will be read to the surprise of no one. When sussing out why oncological therapies cost so much, the usual suspect is research and development (R&D). It takes years to develop a drug, deep pockets to fund that development, and then more time to take a drug through the FDA’s laborious approval process.

A 2017 paper published in the Journal of the American Medical Association (JAMA) examined contemporary R&D costs for cancer drugs. The researchers analyzed the US Securities and Exchange Commission filings for 10 cancer drugs. They found the median time to develop a new drug was 7.3 years and the median cost to be $648 million.

That’s an extraordinary risk. Surely pharmaceutical companies deserve the right to recoup those expenses and squirrel away some profit for future R&D. Right?

The answer is, obviously, yes. However, a recent report by consultancy Evaluate shows those profits to be in excess of a tidy sum. 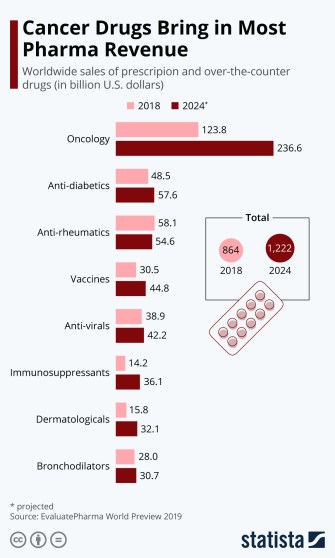 Another day, another billion

In the infographic above, data journalist Katharina Buchholz shows Evaluate’s data for worldwide sales of prescription and over-the-counter (OTC) drugs. As you can see, cancer drugs handily took the number one spot in 2018 and yielded the industry $123.8 billion worldwide. That results in a worldwide market share of 14.3 percent.

By 2024, Evaluate projects cancer drug sales to nearly double to $236.6 billion, increasing its worldwide market share to nearly 20 percent of prescription and OTC drugs. That makes oncological therapies worth more than the next five drug therapies combined.

The report forecasts the main drivers of this success to be Keytruda and Humira. Owned by Merck & Co. and AbbVie, respectively, the two cancer drugs are estimated to earn a combined $29 billion in 2024.

In total, the top 15 therapy areas will earn $1.2 trillion for the pharmaceutical industry in 2024. 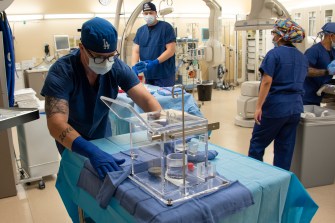 A tray is prepared to administer an Yttrium-90 radioembolization procedure to a patient with liver cancer.

What about the argument that exorbitant R&D costs force pharmaceutical companies to charge such extravagant prices? As the JAMA study showed, the costs and time associated with drug development are certainly immense by quotidian standards. And Evaluate’s data back up that research.

According to the report, the Swiss company Roche is the industry’s top spender, investing $9.8 billion in R&D in 2018. The company is expected to spend another $9.9 billion in 2024, alongside competitor Johnson & Johnson. All told, the pharmaceutical industry’s R&D investment will total $213 billion in 2024.

But that figure accounts for all R&D spending, not just cancer drugs. If Evaluate’s projections are correct, the profits from cancer drugs alone would cover R&D expenses with $23.6 billion to spare. If we consider the industry’s total projected 2024 profits, the surplus is $1,009 billion.

“[T]he industry’s claims that high prices are vital to fund innovation are demonstrably false, according to economists who research how drug companies allocate money,” cultural historian Lynn Stuart Parramore writes. “The truth is that many of these companies use profits reaped from their exorbitant prices to wheel and deal with Wall Street instead of developing new and more effective medicines.”

Parramore further points out that the largest drug companies no longer develop drugs in house. As we’ve seen, Keytruda earns Merck billions, but the pharma powerhouse didn’t foot its R&D bill. The drug was initially developed by Organon International before the Dutch company was acquired by Schering-Plough in 2007, which in turn merged with Merck in 2009.

A life for a life savings

True, there are other expenses to consider beyond R&D, including overhead, marketing, and, of course, battalions of patent lawyers. Tahir Amin, an attorney practicing in intellectual property law, also reminds us that many people in the pharmaceutical industry, especially scientists and researchers, remain driven to treat illnesses and improve lives.

But as he told Big Think in an interview, the business side prioritizes healthy stocks over healthy people:

And I think [much as been] lost in the process as pharmaceutical companies now really start to look at their bottom line and their shareholders and what the investors want rather than what their original purpose was — to help people become healthier. And I think that the bargain of that has tilted more towards the financialization of things rather than thinking about health first.

Of the 9.5 million cancer diagnoses analyzed in a study, the average costs came to $92,098. But that’s just an average. In one case, the parents of a cancer-stricken girl spent $1,691,627.45 on her treatment. She died on her sixth birthday.

As Parramore concludes: “The status quo is unhealthy for anyone except pharmaceutical company executives. Drug companies need a new business model that gets them back into the business of making the drugs Americans need at prices we can all afford to pay.”

As the world population continues to age and live longer, cancer rates will continue in tandem. Unless drastic changes occur, it looks as though Big Pharma has some salubrious years to look forward to.

Explore the key highlights from the UN’s latest release of its world population estimates.
Up Next
The Present

Tech has a diversity problem. Can an app for black professionals help?

The BYP Network is shining light on overlooked talent in certain industries.