Portending the future has long been a preoccupation of our species. Whether fortune or destruction, for millennia our greatest myths foretell wars and romances (which of course are easy to write in hindsight). Still, fortune tellers and astrologers remain in business — we love to pretend we have a futuristic telescope. Even the most mundane of possible activities pique our curiosity.

Some uncover the future in tea leaves, others with yarrow sticks. What about our blood? What if getting routine blood work could clue us in on our end? That’s what a team of data scientists from across Europe (with the research based in the Netherlands) are proposing. Their new study, published in the journal Nature Communications, discovered that by measuring 14 metabolic substances they could accurately predict who would die in the coming years.

A broad poll with 44,168 participants and baseline ages from 18–109, data was collected over the course of 17 years. The team, led by Leiden University molecular epidemiologist Eline Slagboom, notes that determining death within a year is basic science at this point. Guessing it from five to 10 years out is a different challenge, one they believe they’ve started to understand thanks to the constitution of our blood.

Forget Counting Steps. Quantifying Health Will Save Your Life.

Forget Counting Steps. Quantifying Health Will Save Your Life.

Using a “well-standardized metabolomics platform,” the team began with 226 metabolic biomakers, discovering 136 that show an association with all-cause mortality. They eventually landed on 14, including blood sugar levels; inflammation markers; HDL, a common cholesterol marker; albumin, a protein produced by your liver that clues you in on kidney or liver problems; acetoacetate, a beta-keto acid normally used to test diabetics for ketoacidosis (as well as monitoring people on ketogenic diets); and isoleucine, an amino acid that can ultimately lead to damaged brain cells and death.

Of the initial population sample, 5,512 died during the testing period. Using the biomarkers for another survey, the team predicted death rates from a participant pool of 7,603 Finnish people initially tested in 1997. They were able to predict with 83 percent accuracy who would die over the five to 10 year period. One caveat: when testing those over 60 years of age, the prediction rate dropped to 72 percent. Another: the pool was entirely comprised of Finns. Extrapolating to apply to the global population raises eyebrows.

Still, given that this test includes popular and broadly applied biomarker tests for cardiovascular, cancer, and inflammation issues, all of which are known causes of mortality regardless of ethnicity, using this blood profile could clue doctors in on the expected longevity of their patients.

While aware of the study’s limitations, the team feels it provides a potentially useful platform for determining overall health. As they write,

“The currently used metabolomics platform can be incorporated in ongoing clinical studies to explore its value, opening up new avenues for research to establish the utility of metabolic biomarkers in clinical settings.” 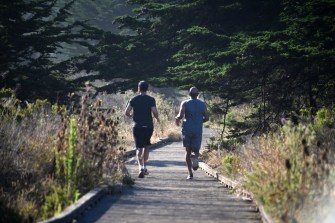 Early morning joggers enjoy the wooden paths that go the length of Moonstone Beach next to Moonstone Beach Drive which parallels Highway 1 in northern Cambria, California.

The question is: do patients want to know? There are two potential problems with such knowledge.

First off, existential dread. Armed with an awareness that death is imminent, the participant could spiral into depression. At the same time, they could also be inspired to live more in the moment and appreciate every day. More importantly, if some of these markers are reversible (such as inflammation or cholesterol markers) they could take action to eat better and exercise more. If it takes the sound of a death rattle to awaken them to their unavoidable mortality, such a test could have positive effects.

The second is insidious though feasible: if insurance companies gain access to these tests, they could refuse or end coverage for those on the brink of death. As the AARP reported last year, the most Medicare dollars are spent in the last year of a person’s life. Given how close one political party has come to overturning the pre-existing conditions clause in the Affordable Care Act, this biomarker test could ultimately serve insurance and pharmaceutical companies instead of patients.

Even contemplating such a scenario is tragic, yet that’s where we are in America. Fortunately the Netherlands-based team provided this research for more useful ends, such as arming us with a better test for understanding how healthy we actually are and how much we should worry about it. We will all face death, some with more warning than others. Best to use such knowledge to pursue a healthier lifestyle.

The new brain tumor treatment targets a cancer that kills 75% of patients within a year.
The Present

By slowing down aging, we could reap trillions of dollars in economic benefits.
Hard Science

Biomedical science assumes that people want to live as long as possible. They don’t.
Up Next
Strange Maps

Marchetti’s Constant: The curious principle that shapes our cities

How the half-hour commute and motorised transport changed our cities into huge metropolises.