As far as medicine and science have come, we remain ignorant of much of how our body functions. It’s a challenge for us, for instance, to wrap our heads around the ecosystems that live within us — that are us. Indeed, even for the self-aware animal that we are, we’re still in a nascent phase of understanding what we really are.

That’s why we need writers like Bill Bryson. His new book, The Body: A Guide for Occupants, continues the American-British scholar’s quest to understand nearly everything — as evidenced by his 2004 book, A Short History of Nearly Everything. Most well-known for travel books such as A Walk in the Woods and Notes From a Small Island, Bryson’s nonfiction writing is as enjoyable as his journals galavanting around the globe — not nearly as humorous, but he lets plenty of quips slip into this latest work as well.

Below are 10 factoids about yourself (and, more generally, our species) that you might not have known. If only this book had been available during my high school years, I might have retained more than I did than with those dry biology textbooks. Educators, take note.

To hear Bryson explore his new work, make sure to check out a recent episode of our podcast, Think Again. 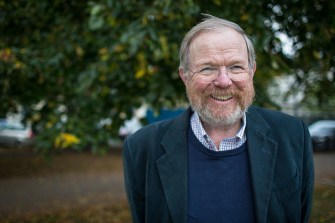 The Resistance is Growing

Much of our stomach bacteria is healthy, yet for a multitude of reasons our gut ecosystem is becoming infertile. First off, we owe Scottish biologist Alexander Fleming a note of thanks for discovering penicillin, which immediately saved millions of lives. Yet, even in 1945 he warned of the dangers of microbes growing a resistance to this newly discovered medicine known as antibiotics.

As Bryson writes, from the 1950s through the ’90s, three new antibiotics were introduced in the U.S. every year; now the number is one every other year. Sadly, pharmaceutical companies would rather focus on drugs that people need to take for decades (like statins and SSRIs) than on low moneymakers that will be obsolete in a few years.

Overuse fattening up farmed animals, C-sections (in which the baby does not pass through the wash of microbes in the mother’s vagina), and our own misuse all seem to blame. For example, 20 percent of all antibiotic usage is for sinus problems, yet antibiotics do not help sinus problems. Bryson continues, “Almost three-quarters of the 40 million antibiotic prescriptions written each year in the United Stats are for conditions that cannot be cured with antibiotics.”

The human brain is hungry. Weighing just 2 percent of our body weight, it consumes 20 percent of our energy requirements. Whether you’re watching TV or doing complex math, your brain burns roughly 400 calories every day. Thinking more doesn’t result in a greater calorie burn. In fact, the opposite is true.

“An academic at the University of California at Irvine named Richard Haier used positron emission tomography scanners to find that the hardest-working brains are usually the least productive. The most efficient brains, he found, were those that could save a task quickly and then go into a kind of standby mode.”

Our vestibular system is responsible for balance. Located inside of our ears, a gel informs our brains whether we are going left or right, up or down. When spinning in a circle, the gel keeps moving when we stop, resulting in that peculiar disorientation children seem to love. Fascinatingly, our brain isn’t interpreting it as merely a pause.

“When loss of balance is prolonged or severe, the brain doesn’t know quite what to make of it and interprets it as poisoning. That is why loss of balance so generally results in nausea.”

Over the course of your life, you’ll secrete roughly 31,700 quarts of saliva. In an interesting comparison, Bryson notes that this is equivalent to “two hundred or so deep baths.” As I recently wrote about, salivary diagnostics is an important developing field of medicine. A recent discovery, Bryson writes, is opiorphin, a natural painkiller produced by our saliva. While six times more potent than morphine, we produce very little amounts of it — not enough to avoid the pain of hot pizza on the roof of your mouth, but still, an essential biological feature that helps us manage pain.

Pain in the Head

Speaking of pain management, only our brain — an organ that itself cannot feel pain — can feel pain. Headaches are not even our brain hurting, regardless of how deeply we feel it. Of all the various types of pain there are, some confer evolutionary benefit by warning you to avoid something while others seem to be a design failure. For example, we usually don’t feel the pain of cancer until after it’s already ravaged our body. Not much of a warning system, that one.

There is not much of a difference between physical and emotional pain. Both can be diminished through a variety of means, such as “pleasant aromas, soothing images, pleasurable music, good food, and sex.” Another important factor is expectation. Bryson concludes, “In many ways, we feel the pain we expect to feel.”

Younger is Not Better

Up until relatively recently, children went through puberty around age 16 or 17. That dropped drastically in the last century due to improved nutrition. There’s a problem, however: young girls are now menstruating as early as seven or eight, and there is a link between excess estrogen and cancer later in life. You solve one problem — in this case, malnutrition — and suddenly others appear.

While there is no clear reason why we develop allergies at all, between 10 to 40 percent of the world’s populations suffer an allergy to something. Strangely, the richer the nation, the more allergies its citizens get. While there is a genetic link, it’s only an increased chance that you’ll get what your parents have (about 40 percent). Genes are not destiny, unless they are.

One thing is certain, however: babies born through a C-section are eight times more likely to develop allergies (as well as more likely to be struck with diabetes, asthma, celiac disease, and obesity). Today, 60 percent of all births through C-section are because of convenience, not necessity. There’s a reason babies are born the way they are. By not allowing for that (unless medically necessary), we’re doing our children more harm than the temporary good of reduced pain during childbirth.

Stop Eating So Damn Much

In 1915, an average American spent half of their weekly income on food. Today that number is closer to 6 percent, yet we’re eating more than ever. As our biology dictates a hoarding mentality, health care systems pay the price, mostly due to processed foods (almost all of which contain added sugars). As Bryson puts it, “We are in the historically extraordinary position that far more people on Earth suffer from obesity than from hunger.”

That Said, Weight Isn’t Everything

We know that obesity creates many health problems, but a hyper-focus on “clean eating” and a holistic lifestyle doesn’t mean you’re going to avoid all of biology’s ills.

“Roughly 40 percent of people with diabetes, chronic hypertension, or cardiovascular disease were fit as a fiddle before they got ill, and roughly 20 percent of people who are severely overweight live to a ripe old age without ever doing anything about it.”

The body is certainly confusing.

It’s incredible how easily swayed we are. For example, in 1968 a doctor published a letter (not a study or research) describing how uneasy he felt after dining in Chinese restaurants. He speculated that MSG might be the cause. It wasn’t, but for decades we’ve labeled it as toxic. It’s not; it’s an essential component of the glorious taste sensation, umami.

The marketing ploy that has men taking testosterone supplements to stave off the natural 1 percent yearly decline starting in their ’40s? Putting it back in is more likely to harm you: men increase their risk of a heart attack or stroke by taking these supplements.

Ten thousand steps a day? That myth is based on a single study done in Japan in the 1960s that was on shaky ground to begin with. This said, you should be walking. Ten thousand is roughly equivalent to five miles; studies of hunting and gathering societies, which are comprised of generally fit populations, have a “slightly” higher average: 19 miles per day.

Sleep is for the consolidation and transferring of memories? Maybe.

Finally, we don’t lose most of our body heat through our heads. Body heat is evenly distributed. If you walk out in winter without a hat, however, you are risking losing body heat through that area because it’s exposed. Listen to your mom and put on a hat, dummy.

Tags
biologyevolutionary psychologyhealthhuman bodymedicineneuroscience
In this article
biologyevolutionary psychologyhealthhuman bodymedicineneuroscience
Related
Health
How saliva changes the flavor of food
“It’s a liquid, but it’s not just a liquid.”
Neuropsych
Memory and the benefits of forgetting
Forgetfulness isn’t always a “glitch” in our memories; it can be a tool to help us make sense of the present and plan for the future.
Neuropsych
Asthma drug brings back “lost” memories
In a study involving mice, scientists used two different techniques — one optogenetic and one pharmacologic — to recover “lost” memories.
Life
Our antidepressant drugs are affecting animals and ecosystems
A toxicologist explains the impacts of antidepressants on fish — and no, they’re not getting any happier.
Thinking
Visual thinking: How to understand the inner lives of animals
Humans are good visual thinkers, too, but we tend to privilege verbal thinking.
Up Next
Smart Skills
4 courses that will turn your podcast idea into solid gold
Anyone with a killer idea for a podcast can learn valuable tactics for turning that idea into a success with the training in the How to Start a Podcast Bundle.