Ariel Levy is a staff writer at The New Yorker magazine and author of the book Female Chauvinist Pigs: Women and the Rise of Raunch Culture. Her work has appeared[…]
Go to Profile 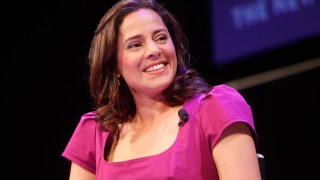 No human gets everything they want in life, as Ariel Levy discovered in the worst possible way.
▸
5 min
—
with
Ariel Levy

“The thinking that you can have every single thing you want in life is not the thinking of a feminist,” says Ariel Levy, “it’s the thinking of a toddler.” According to Levy, Western culture isn’t telling the whole truth about the human condition: you will not get everything you want in life. Levy knows this firsthand, having lost her child in her fifth month of pregnancy, which she wrote about for The New Yorker. By choosing to be an adventurer and “the protagonist in [her] own life,” Levy admits she may have left it too late to start the process of having a child at 37 years old.The biological clock, which she refers to as a design flaw of the female body, is very much a women’s cross to bear, and when it went wrong for her, the much-offered popular notion of “everything happens for a reason” brought her no solace. What helped her cope after her loss — and the series of hardships that followed — was not the comforting thought of a greater good, but surrendering fully to grief. Ariel Levy’s most recent book is The Rules Do Not Apply: A Memoir. Feminism says you're fully human, you're a full human being as a woman; but the human condition is not getting everything you want in life, so it stands to reason that would apply to us too. I think that there are plenty of cultures and religions that impress that upon their adherence, and I think that ours at this moment in time is not one of them.

I really thought that it was a worthwhile project to try to be the protagonist in my own life and that I wanted to be a writer and I wanted to be like an adventurer. I mean those are the kinds of non-traditional female lives that I looked up to and aspired to emulate. And I did get to do that, I do get to do that as a writer for The New Yorker and it's great. I love it.

But what my experience is, if you decide at 37 “I’m ready to have a family,” and anything goes wrong, as it did for me, then you've kind of run out the clock and then you don't get to do that. Then you've missed that part of life, that field of experience. So I think that that's what I was trying to say is that just, I think that there's sort of a design flaw in the human female animal, that like at exactly the moment you feel you finally might be mature enough to be equipped to take care of a person other than your own self, that is the moment when your body says, “I’m out.” And it's not the same for men. That is a woman's cross to bear.

A couple months after it happened I was at my friends 40th birthday party and I was talking to this woman and she said, "Are you the Ariel who all the bad things happen to?" And my first thought was, How many Ariel's do you know? But then, of course, I said, "Yes I am that Ariel."

Once something has happened – so for example, when I was like in the thick of my grief I would wake up in the morning and I would just feel like, “No. This is unacceptable. I don't accept this. I don't agree to this reality. I don't want my son to be dead. It's not cool with me.” I think that's one of the stages of grief, is denial—or bargaining I suppose that is.

Anyway whatever, the point is that I don't know that everything happens for a reason, but once something has happened the sooner you admit it—like the sooner you admit, “Whether I accept it or not, this is the truth, so I better find a way to surrender to it.” I mean I think that's the trick really.

Want to Succeed? F-Up Until You Find Your Passion