From July 1st, when its external borders will re-open, American tourists won’t be welcome in Europe, decrees a new agreement from the European Union. The bloc decided on a list of 15 safe countries whose residents would be allowed to travel in the EU. Why is the United States not on it? A tremendous surge of new COVID-19 cases, demonstrating that while the EU tackled the first wave of the coronavirus, the U.S has not. Previous reports stated that Secretary of State Mike Pompeo was in negotiations with the EU, but those must not have gone the way the U.S. planned.

This graphic shows vividly the very different directions the two regions are going: 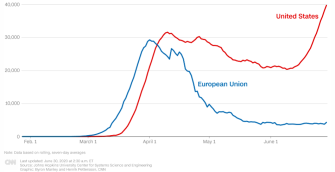 While new cases reached their peak in the EU around mid-March, they’ve been on an evident downward trajectory thanks to early lockdowns, mandated masks, and science-based cautious re-openings. The U.S., with inconsistent government messaging and actions as well as a divided public, has been adding about 40,000 cases every day. Dr. Fauci has been warning Congress that he wouldn’t be surprised for this amount to reach 100,000 if we don’t get the situation under control, and he didn’t sound very confident that we would.

The U.S. leads the world in overall cases (2.6 million) and deaths (at least 126,000). By comparison, the EU bloc has 116 million more people than the U.S., but over a million fewer cases. The head of the CDC also thinks that the official tally is severely undercounted, with the true number of infected in the U.S. being around 20 million.

Other countries excluded by the EU include Brazil, India, and Russia, where cases are spiking as well. Who is on the list of allowed countries? China, with some conditions. Also allowed are citizens from Algeria, Australia, Canada, Georgia, Japan, Montenegro, Morocco, New Zealand, Rwanda, Serbia, South Korea, Thailand, Tunisia, and Uruguay.

The decision by the EU will be re-examined with relative frequency, up to every two weeks. But for now, Americans wishing to travel to Europe would have to wait.

Music therapy might boost memory, but the benefits are small. Just in case, tell your grandparents to listen to their favorite 1960s tunes.
Explain It Like I’m Smart

What would you do differently if you listened to your true desires?
▸
5 min
—
with
Luke Burgis
Health

Watch as the small mirror joins millions of other pieces of space junk currently orbiting the planet.