A new study links the spread of the coronavirus pandemic to detection rates, arguing that on average, only 6% of actual infections have been found worldwide. The U.S., specifically, has one of the worst detection rates.

The study from the University of Göttingen maintains that the true number of cases of the coronavirus could be dramatically larger than what has been reported by different countries. The study used information leading up to March 31st, which means that at that point, while the Johns Hopkins data report used by the researchers showed less than a million confirmed cases globally, the estimate of the true number of infections would have been at least “a few tens of millions,” write the researchers. The U.S. alone would have had over 10 million. What the true number is at right now is anyone’s guess.

The new report comes from Dr. Christian Bommer and Professor Sebastian Vollmer from Göttingen University, who analyzed the quality of the COVID-19 mortality estimates and time until death in a recent study published in The Lancet Infectious Diseases.

The main reason for the discrepancies lies in how many infections individual countries were able to identify. These differ wildly due to lack of and delayed testing. This can explain also why some countries like Italy and Spain have much higher casualty numbers compared to confirmed cases.

The scientists estimate that Germany, for example, has detected about 15.6% of infections compared to just 3.5% in Italy and 1.7% in Spain. The detection rate in the U.S. is even lower at 1.6%, think the researchers, with the United Kingdom coming in even below that at 1.2%. Both of these countries have been slow to test and to impose nationwide quarantines, seeing a surge in infections and fatalities. 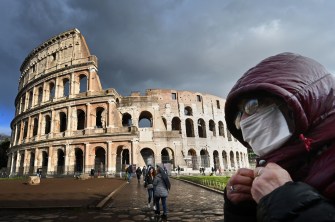 An individual wearing a protective mask passes by the Coliseum in Rome on March 7, 2020 amid fear of Covid-19 epidemic.

Who has done well in testing is South Korea, discovering nearly half of all the COVID-19 infections.

Professor Vollmer explained that these results show that “extreme differences in the amount and quality of testing carried out in different countries mean that official case records are largely uninformative and do not provide helpful information.”

The scientists think that the ability of a nation to detect new infections is paramount to its efforts to contain the virus. They warn especially that ending travel restrictions and social distancing should be linked to “major improvements in the ability of countries to detect new infections”. Governments need to be able to take appropriate measures to isolate the infected and to trace who they had contact with. Without such measures, the virus will just come back in a new wave.

You can read the recent study here.

Other factors that have been used to explain different infection and death rates around the world involve particular differences between countries. Italy, for instance, has the second the oldest population in Europe, with a much higher percentage of people at risk from the virus. As BBC reports, in 2019, almost a quarter of all Italians were 65 years or older, compared to only 11% in China.

Another explanation for the varying statistics – countries have different criteria for ascribing deaths to the coronavirus. As many of the fatalities result from complications in underlying medical conditions, the true cause of death is not always clear.

Medics test patients for the novel coronavirus by collecting samples from their nose in Munich, Germany, Monday, March 23.

An independent researcher looks into why there’s such strong opposition to her research.
Up Next
Health