Your Marriage of the Future: Seven Science Fiction Ideas about Relationships and Sex that Might Come True 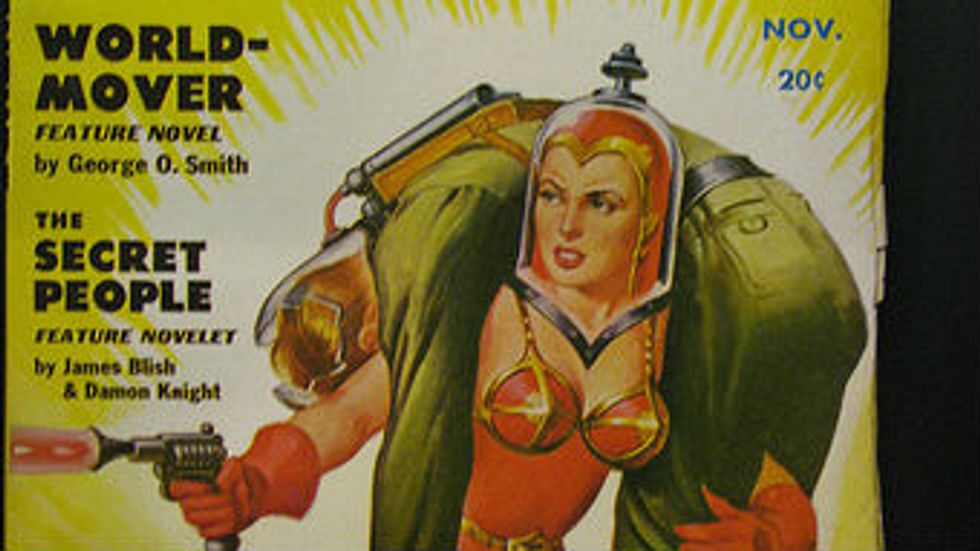 I’m not a big science fiction reader, but I admire how the genre has just enough of a toehold in reality that it feels plausibly weird. It stakes out the space of the uncanny: familiar, but disorienting.

Here are marital sci fi ideas that seem like they might come true. I’m choosing things that we already have marital “prototypes” for today, albeit in some cases on the edgy frontiers of that strange world known as Planet Relationship.

What if you lived for 300 years? Would “’til death do us part” still apply? In John Wyndham’s Trouble with Lichen, Diana is a smart, sexy scientist who’s isolated the secret to living hundreds of years (plot spoiler: it’s moss). “How is marriage going to mesh with the new order,” a character asks her. “Fixed term marriages, with options, as in leases, perhaps?” Or maybe “companionship” appeal, rather than sex appeal, would become the primary consideration if we extended marriage from 50 to 250 years?

Marital term limits already have been proposed in some countries, and serial monogamy is a common marital practice, since many Americans marry, divorce, and re-marry. Maybe the practice will shift from normal to ideal in the 21st century.  Forever’s only getting longer. Fifty is already the “new 30.”

One of the most popular sci fi relationship ideas is non-monogamy. Samuel Delany’s protagonist in Dhalgren is in a polyamorous relationship, and Robert Rimmer’s Harrad Experiment (1966) explores open marriage. Sci fi writer Robert Heinlein was a noted advocate of sexual liberation and free love.

Ethical non-monogamy’s already here. An estimated five percent of marriages today are “open,” and that may well be an under-count.

REPRODUCTION BELONGS IN THE LAB, NOT MARRIAGE

Sperm banks, egg donors, birth control and surrogate motherhood have already shattered the ironclad marital premise of “biology as destiny” and the bond between marriage, sex and reproduction. Medical technologies can replicate an in utero environment to keep extremely premature babies alive.

Sci fi imagines that the marriage of the future will have a more tenuous link to “breeding.”

In addition to Aldous Huxley’s Brave New World, Lois McMaster Bujold’s Vorkosigan Saga series explores a world of “uterine replicators” and genetic engineering where reproduction belongs in the lab.  Relationships and marriage aren’t tethered even vestigially to reproduction, and so they spin off in many different directions and forms, from all-male monastic societies to promiscuous ones.

American marriage politics are consumed by the opposition between homosexual and heterosexual unions. But what if sex was just an act, not an identity, or an opposition of two main types? Relationships of the future might obliterate the very idea of a fixed sexual orientation.

Heinlein has fun with sexual polymorphism. His characters have sex a la carte, in a variety of ways and with a lot—a lot—of different partners of both sexes. These characters aren’t really “oriented” in one particular direction at all.

So much for the “ISO” abbreviations in the personal ads.

From Charlotte Perkins Gilman’s Herland on, a popular (feminist) sci fi idea is a sex-segregated world without men, or marriage.

In Sheri Tepper’s The Gate to Women’s Country, women all live together in a gated community, with eunuch sell-outs around as servants, and hold annual festivals where a few men are invited in to mate with them. James Tiptree, the pen name of a female bisexual , imagined a female-only society after men had been killed off by disease (“Houston, Houston, Do You Read?”). Men are comedic fodder for the women, who reproduce through cloning. One (woman’s) utopia is another (man’s) dystopia. I guess.

A lot’s been written in the last decade about the superfluity and the “end” of men. It seems unlikely that we’d ever actually live in sex-segregated worlds, but it’s already true that women don’t need men to support themselves or find an identity. What sci fi presents as a fait accompli is just a subtle drift today—a drift into our own “Mars/Venus” worlds and destinies, and a feeling that women might do just as well without men or marriage.

MANY MOMS AND DADS

Jo Walton’s Lifelode –called a “domestic fantasy”—describes a quiet farming community, where characters are polyamorous and families are intentionally formed with several adults and children from different relationships.

The ideal today is still the married nuclear family, with two parents and children, even though this isn’t the statistical norm at all.

The marriage futurist might predict normatively blended, non-nuclear families, where children are raised with different adults from various relationships.  Blended families are already common, and the children of divorced parents often find themselves in relationships with other adults as their parents start dating again.

LOVE ACROSS THE CARBON DIVIDE

Bladerunner envisions desire between android and human, and androids designed for human pleasure; Strange Days features a SQUID device that lets people experience fully the sexual violence or pleasures that others have already had; the Matrix gives us virtual experience almost indistinguishable from the real.

Sex and desire are more commingled with technology than ever today. In online and social media, we can have mental affairs and simulate experiences. Relationships of the future will probably have more virtual, cyber-desire infiltration—avatars, simulators, memory data chips, robots, and Wii-like games that take us on “sex trips,” perhaps, without the trouble of leaving our chairs. Anything’s possible.