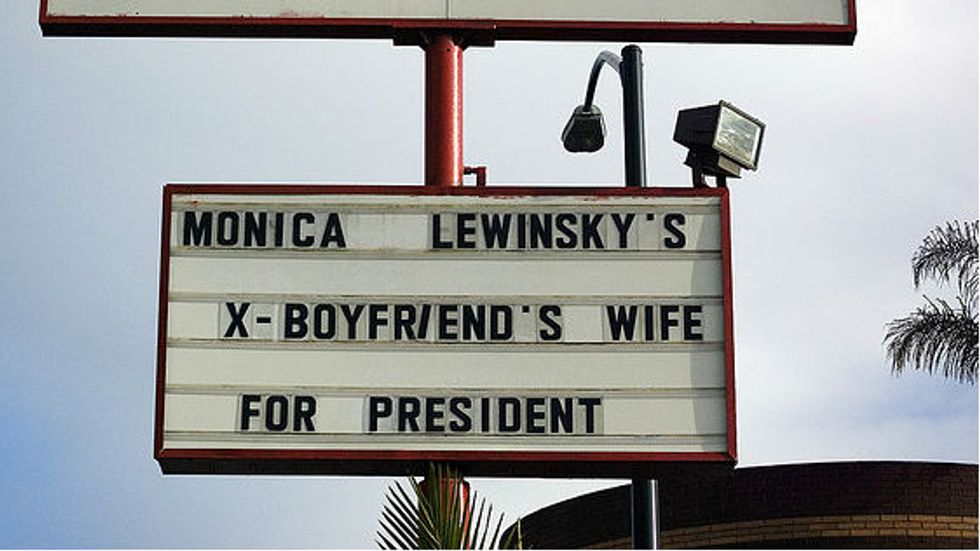 I’m going to write the unpopular thing and go Tough Love on my own people.  A modest proposal: Women need to act like the successful grown-ups that they are or aspire to be, and stop screwing around with daddy figures of authority who have power over them.

As a general rule, don’t sleep with him IF:

--He qualifies for the AARP discount at the movies while you qualify for the Student discount...

--Your affair, if discovered, would end up on the CNN tickertape or as a Jon Stewart punchline...

--He talks about 8-tracks fondly, and you think he must be referring to a new Nike sneaker...

--His pay grade, corner office, rank, or title is a wispy rumor compared to your own.

Deserved scorn has been heaped on august figures of real power (President Clinton; General Petraeus) or largely self-engrossed “legends in their own mind” (your modestly-published author with a huge ego, for example) who cheat with much younger underlings, students, and colleagues.

But, excepting scenarios of sexual harassment and coercion, it’s time for us as women to face things honestly. Let’s put our big girl pants on—and keep them on— when confronted with the vestigial fantasy of the more powerful and/or older man who we must feel primally will give us status or take care of us like a sugar daddy.

“But this affair is different,” Lolita protests to me. “It’s a really intense bond.” “It’s real love.” Ah, yes. The myth of sexual exceptionalism is a strong one.

It’s similar with the mixed-power or cross-generational affair. It’s an efficient, symbolically compressed cliché, a sexual relic of an earlier time, perhaps, in much the same way that we still have an appendix and wisdom teeth.

Men think they’re gaining an illusion of virility, beauty, and youth as well as social status when they can cavort with a younger mistress. But the arrangement is more like the sexual equivalent of combing those few surviving strands of hair over a growing bald spot.

Women think they’re gaining an illusion of status when they pursue these relationships. Most of the time, they look abased or self-trivializing instead. The arrangement broadcasts to the world: “You Do Not Need to Take Me Seriously”—sadly, even when the woman in question has accomplishments and achievements of her own that might otherwise incline us to take her quite seriously, indeed.

Men may “use” younger women as vanity pieces, as boasts to other men. But, in their own way, women use them, too. They use their zany, mixed-power flings as social trophies or conversation pieces, of a sort, to deepen their intimacies with women. There’s always the lure of the juicy story to tell your friends, a la the notorious Linda Tripp, sexual consigliere to the notorious Monica Lewinsky.

I could describe to men, but they’d never truly believe me, just how much some of these mixed-power affairs are motivated by a desire to bond with girlfriends through the act of sharing and re-telling the story afterwards (“you won’t believe who I slept with! The President!  The General! The Mighty Famous Washed-Up Lecherous Director! My Professor!”).

That homosocial intimacy among girlfriends, soldered often by shared sexual secrets, is a powerful yet covert social force.

Colleges are especially perilous for the mixed-generational romance. Campuses sometimes tackle the problem of student-professor sex simply by outlawing it, which is at least an elegant solution to the Lolita Syndrome.

It’s grimly baffling on college campuses that women are surrounded by attractive, virile and intelligent men (okay, work with me on this one) who are at the same phase of life and arguably at the peak of their physical prowess. Instead, in a scenario of transference ripped from the very foreword of the psychoanalytic playbook, they end up psychically entangled with a 50-something professor who’s bitter about his wife, children,  career, the small relevance of his life’s work—any number of existential gripes are possible—and  acting out with that snake oil of the younger woman.

We all know the professor should be and do better. But women should, too. Both our work lives and our sex lives are too important to belittle with these kinds of alliances.

“Well, it’s none of your business,” Lolita now huffs. True. Except it sort of is my business.

Because every time you show up on the arm (or walker) of your older, more powerful lover, you’re trivializing your people. You reinforce the idea that when all is said and done, women are content to sleep their way to mobility, or to hide behind a man, or to secure an illusion of status through the back door when the front door is flung open for us.

The days of sleeping your way to the top with powerful editors, generals, or politicians, or the world as one big Hollywood casting couch, are over.

So if you can’t do it for yourself—for your self-respect, reputation, integrity, and to preserve the dignity of your vocation—then could you please hold back for the rest of us?

I’m reminded of a story I heard from a Boston college some years ago. The college had an epidemic of eating disorders—this was at a time when they were spreading like fashionable contagion. Consequently the women’s dorm bathrooms reeked of vomit from so many students engaging in self-destruction simultaneously.

The college provided the usual support services for these victims of self-destruction. They struck a sympathetic note. They talked about illness and disease and low self-esteem and the pressures to achieve women face (although many women manage to achieve and handle power and have fulfilling sex lives without ever sticking a finger down their throats and barfing).

Then a female student took a simple step that actually helped. She posted a sign in the bathroom: Women, could you please stop vomiting in here? It’s disgusting, and it’s ruining the bathroom.  What an obvious but bold move, to assert that we’re all part of a community, that our individual behavior isn’t just about our emotional lives or torments, that our comportment and behavior affects others, and that we should consider other people before we vomit.