The Most Under-Rated Relationship Skill: Suppression (Or, “Don’t Just Do Something. Stand There.”) 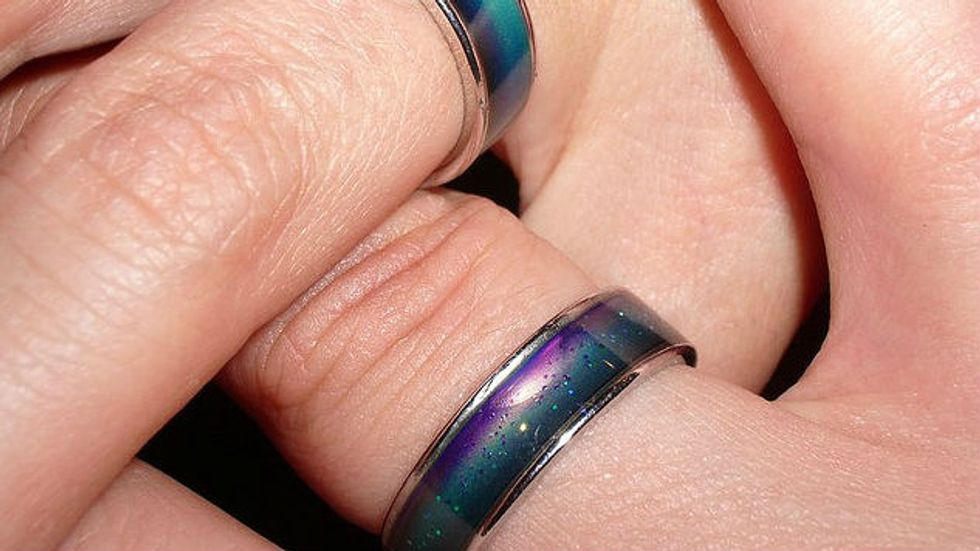 George Will used an apt phrase to describe the policy options toward Syria. When faced with universally bad choices, he opined, “Don’t just do something. Stand there.” Better to do nothing than to do the wrong thing just to do something.

This twist on the original phrase captures an invaluable counterpoint to the regime of disclosure, tearful confession, revelation, therapeutic declaration, and “honesty,” whatever the hell that even means. It’s time we had more “just stand there” in our lives and less “do something,” of an emotional or verbal sort. This advice is especially important in relationships.

Suppression is the most under-rated relationship skill. No, you won’t read this advice in the Self-Improvement aisle where, to my eternal shame and anger, my cultural commentary on marriage is mis-shelved. (It exceeded the imaginative, literary, and entrepreneurial capacities of commercial publishing to recognize the problem and, anyway, publishers are under a delusion that you, the reader, will only buy an actual book when you can be manipulated into believing that it actually and tangibly will give you advice and instructions on how to behave, or precisely describes your specific, personal, individual life. In other words, publishing imagines that you are a hopeless narcissist).

Self-Help literature’s generic survival depends on giving you a script, plan, action agenda, or assessment quiz for doing something to improve your relationship.

But doing nothing and just standing there is often the best course. Also, it’s free, and requires no DVD or promotional t-shirt.

In my example, suppression means, more informally, keeping an emotion, issue, or annoyance to yourself, rather than airing it. It means opting for silence over revelation, for emotional largesse and stoicism over the treadmill of “processing.”

You’re with a partner at a party. You’re mildly irritated that they’re paying too much attention to someone else. What to do. Share the feeling? Just let it go? Or, your feelings are hurt because your spouse prefers to spend time rafting or golfing with buddies than with you (I’m making this up—I know neither golfers nor rafters).

“It’s dishonest not to share that feeling,” the confession-loving partner objects. “You’re just hiding important emotions from your partner.  It eats away at the relationship and kills it. The feeling festers.”

At some point, the act of not fussing about something or airing it verbally became synonymous with toxic deceit.

To argue the other side, excessive sharing is undignified, boring, often futilely circular or recursive, and etches into the relationship’s Permanent Record what are often nothing more than ephemeral, ill-formed notions or feelings that will mysteriously expand, like a Chia Pet, to monstrous, undeserved proportions if shared—and because you shared. Emotions are so fluid and permeable, like a river. They change, whether confessed to or not. The very act of sharing and articulating an emotion gives it a permanence, stature, and ever-fixed presence in the relationship archive that oftentimes, it doesn’t deserve.

Perhaps there’s a tendency to link emotional disclosure with relationship wellbeing—and to make a vice out of the arguable virtue of suppression—because having been fed a diet of memoirs, self-help and confessional literature, we’re inclined never to believe in our intimate lives that a cigar is just a cigar.

It’s not that a spouse made an innocent mistake; it’s that the action conveys deeper symbolism. The simplest micro-malfunctions or just quirks of human relations become meta-narratives. Book reviewers love “honest” memoirs. They’re always calling them “GRIPPING” and “FIERCE” (don’t believe them, by the way. Nothing is more contrived than the presentation of self in a memoir. It’s just that in the better ones, the author’s vanities and intentions manage to be so inscrutable, inoffensive, or impenetrable that the reader doesn’t notice or understand them).

Suppression’s villification has worsened with social media and a gazillion online media outlets, where people write for free about every minuscule sexual or relationship issue. If a Slate or Salon writer can make this much out of thong underwear, a family squabble, or some bizarre sexual mini-drama with their partner, then we should process things with the same avidity, too, right?

Don’t. You have to understand: There are whole enterprises of therapy, entertainment, and media, that make money off of getting you worked up over nothing, or of urging you never to accept the tribulations of love graciously and quietly.

They don’t want you to passively but tenderly embrace the flawed humanity of your beloved in its totality, but, rather, to pathologize the hell out of it, and then do a post-mortem, using their book as scalpel and saw. Equanimity is their enemy.

In this capacious therapeutic economy, which encompasses not only therapists but ancillary self-help regimes, media, and literature, things must connote. You must process. Confess. Otherwise, what fills all the millions of pages? (but try finding the adjective “vulgar” in any of these outlets).

When I was in high school I was very close to several girls in my class. Occasionally, we’d play a game in which we’d name each other’s “best and worst qualities.”

This was, of course, a profoundly stupid idea.

Eventually, we gave up on it, but not before some wretched nights in which we had to grapple with the unvarnished opinions of our very closest friends in the world. Curses were hurled, tears shed, and fragile reconciliations achieved, but usually only when the offending “honest” speaker confessed (honestly or nor) to intoxication, or “took it back,” in that great playground art, or just begged for forgiveness for having been such a fool.

The traits we revealed as bad points were better left suppressed. Obviously.

And the thing is, the critical comments weren’t in any deep or inviolable way even that honest. The deepest honesty is that we were a tribe, and we cared for each other a great deal, with all of our flaws and complexities, and there was no way to represent that reality in one conversation or gesture about a hurt feeling.

Does confession or emotional sharing bring greater intimacy? This is where suppression takes a hit. Not sharing fully creates distance. It’s a form of “emotional withdrawal.”

I’ve no doubt that such cases exist. I’ve seen, and been in,  plenty of them. I’ve also seen scenarios where the remorseless airing of grievances and their subsequent processing weakens the heart of the relationship as surely as a series of minor heart attacks, over time, will cause permanent scarring and damage.

There’s no rule of relationship physics that can predict generically how the decision not to suppress a feeling or an insecurity will break. Like as not, it can bring estrangement, distance, outsized bitterness, and chronic defensiveness. It can powerfully reorient a relationship. In most cases, it lingers hard and deep in the partner’s mind.

But, we’re told, suppression is presumably bad for your health. In the 1970s they called it “gunnysacking,” and it was thought to be a cause of male heart disease. Men suppressed so much emotion that they were dying of heart disease caused by failure to disclose. Some of them started crying; others went to therapy sessions where they hit people with oblong pillows; others just spouted a new vocabulary and then secretly went back to doing what they were doing before.

Having lived through relationships with the emotionally stoic and slurry alike, it doesn’t seem to me that suppression ruined  health or relationship any more often than emotional nitpicking. Rather, suppression is a gesture when—the healthy part—you notice how you’re feeling, but choose to set it aside,  to put it in a little box in your head, even to push it down.

At some point, somewhere, I crossed a line. Because now I say, give me the WASP any day.