The Freakonomics of Marriage: Or, If I’m Married, How Come I’m not RICH Yet? 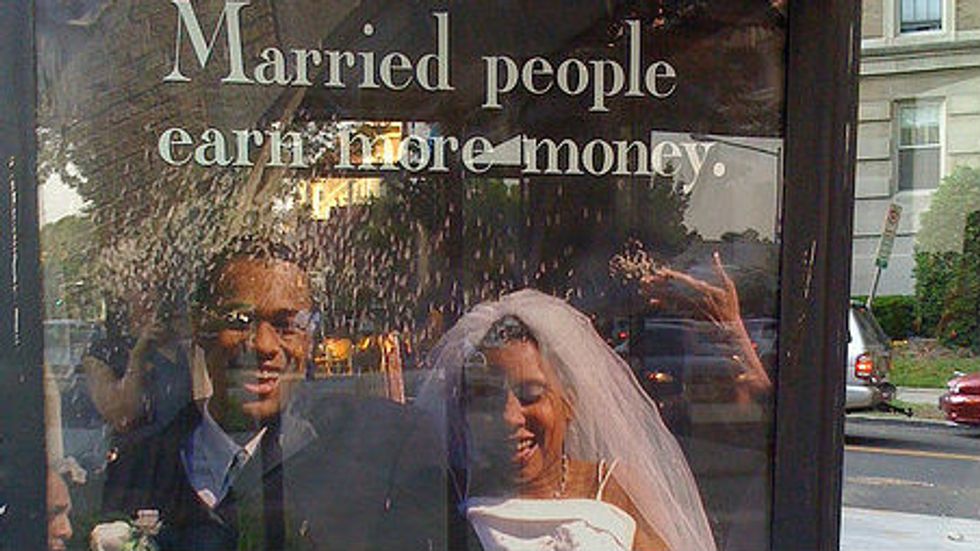 The year of magical thinking about marriage, reproduction and vaginas (see reviews of Naomi’s Wolf’s hilariously trashed book) continues.  The conservative Heritage Foundation released a report last week that reprises the argument that non-marriage is a source of poverty. Conversely, as a pro-traditional marriage bus stop poster in Washington, DC once promised, magically,  “Marriage Makes You Rich.”  That’s why all the married folk on your street drive BMWs, wear Prada, and vacation in the Hamptons.*

The report’s analysis is descriptively accurate:  More affluent, college-educated Americans marry more and divorce less today than the white and non-white working classes alike and the poor, who seem to be abandoning the institution of marriage in greater numbers. But a correlation isn't the same as a causation.

Maybe it’s not that poor people are poor because they’re not married. Rather, they don’t marry because they’re poor. It’s likely that France’s Minister of Justice Michèle Alliot-Marie was right to conclude that marriage is “a bourgeois institution.”

I don’t mean “bourgeois” as a criticism. Marriage works best and has the most logic when it can create economies of scale between two individuals with jobs, and/or resources, either tangible in the form of a paycheck, or intangible in their willingness to contribute parenting and domestic labor—even if that means engaging in “ideology mobility,” as I call it, and setting aside patriarchal, “traditional” ideas that husbands should be breadwinners. When these two people with resources of these kinds join in marriage, their lives are easier and more affordable.

At the margins of the economy, however, for the filthy rich and the dirt poor, marriage doesn’t seem to make as much sense.

Consider the most notoriously non-marrying communities in the U.S.:  the multi-million dollar estates of the stars in Beverly Hills and the "abandominiums" of impoverished neighborhoods in rustbelt cities such as my own.

Hollywood celebrities avoid marriage, or do it so casually that some entertainment columnists suspect that it’s more a "publicity extravaganza” than a marriage. Raoul Felder, the famous celebrity divorce lawyer, sees a celebrity marriage as "the first step on the road to divorce."

Kim Kardashian’s 72-day quickie marriage (“Mistake or Fake?” wonders People) is one recent example in a history of Hollywood never-lasting love that stretches back to Elizabeth Taylor. "Express" Hollywood marriages can last from 10 days (Carmen Electra and Dennis Rodman) to three weeks (Drew Berrymore and Jeremy Thomas) to seven months (Shannon Doherty and Ashley Hamilton). InStyle magazine featured Courtney Thorne-Smith on its cover when she married a genetic scientist, but before the magazine hit the newsstands seven months later, the couple had already separated. Hollywood stars must not have the same marital metabolism as the rest of us.

For example, Michael Douglas and Catherine Zeta-Jones’ marriage was almost derailed by intricate pre-nuptial negotiations. Douglas had rejected Zeta-Jones' request for $4.4 million for every year they were married, and a house for life. Douglas' attorney was counter-offering $1.4 million a year and a house, but one that would remain a part of Douglas’ estate. But Zeta-Jones, who was pregnant with Douglas’ child, had already agreed to let Douglas keep all the wedding presents worth more than $18,000, and felt that she’d compromised enough.  "She isn't money grabbing,” a friend reassured an entertainment reporter (um, yes, well…). “She just doesn't want to feel like she's getting a raw deal." And Douglas had given his first divorced wife $60 million and a Santa Barbara mansion!

The poor women that Harvard sociologist Kathryn Edin writes about in her fine research on marriage don’t find themselves awkwardly featured on the cover of Instyle. Yet they’re just as “post-marriage.” In Baltimore, less than 10 percent of households now conform to the “traditional” model of a married, heterosexual couple with offspring.

Edin asked poor women why they wouldn’t marry, and found that they feel "marriage entails more risks than potential rewards." Women recognize that "any marriage is also economically precarious, might well be conflict ridden, and short lived." A poor woman might be better off not married because then "she has the flexibility to lower her household costs by getting rid of him." One woman told Edin that after her boyfriend lost his job, "I was trying to live on my welfare check and it just wasn't enough.… It was just too much pressure on me [even though] he is the love of my life. I told him he had to leave, even though I knew it wasn't really his fault…. But I had nothing in the house to feed the kids."

These women wanted to make sure that they kept everything in their name and control if they ever did marry. That’s the shared, self-protective logic of marriage for those who have a great deal to lose financially and for those who have very little to lose. Edin concludes that her subjects "simply could not afford to keep an economically unproductive man around the house. It's a luxury that a low income mother can't afford."

Both Hollywood and the “ghetto” also have attracted criticism for their non-marrying ways. Remedies abound. A frail celebrity marriage can go to an exclusive "couples treatment" at a day spa called Going to Skin in Envino, California. "I have created more love affairs, stopped more divorces, and made more people happy," boasts the spa's founder. The most popular couples package is "endless courtship." The two hour, $375 pampering session offers a privacy soak, dry brushing exfoliation, a cornmeal pineapple facial and massage.

That’s where Hollywood goes to fortify its marriages. Low-income couples in Baltimore go to “marriage education” classes in church basements and state government buildings, funded by the Federal government’s Healthy Marriage Initiative within the Temporary Assistance to Needy Families (TANF) program. I can’t tell you if they get body shampoos and cornmeal pineapple facials, but I’m guessing not.

Poor women don’t reject the idea of marriage. Nor do Hollywood stars. It simply doesn’t end up running as smoothly or make as much sense for them economically.

Also, marriages in the professional class today are likely to pool the intangible assets of labor:  They tend to engage in gender-bending around chores, breadwinning, and childcare, which makes marriage an even more adaptive and convenient arrangement for them—one that makes life easier and more prosperous (and therefore, more appealing).  If you’re filthy rich, those benefits don’t matter as much. If you’re filthy poor, those benefits don’t apply as much.

Maybe the way to shore up marriage, for those who want that, is to shore up the American middle class that is marriage’s natural habitat? With living wages, perhaps, and good jobs?

*I posted parts of this column at this site in 2011, and update it here.