Testing the Bottom of our Humanity 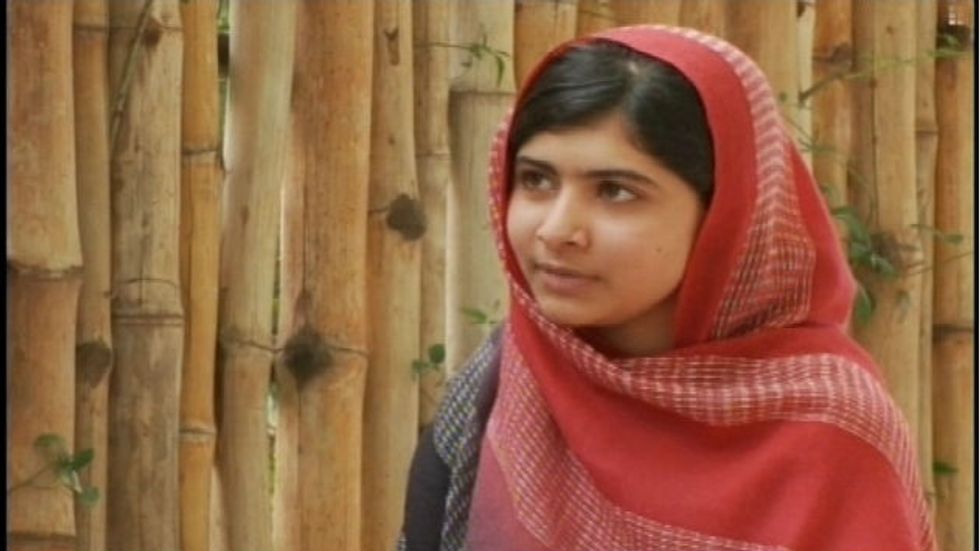 Market reports sometimes use the phrase “testing the bottom.” It’s when a market flirts with a new low, below which it will not fall. The phrase also applies to the housing market. Buyers question how low it can possibly go.

It seems to me we’ve been testing the bottom of our humanity in the past two days.

Is there a floor on how appalling our political and social behavior can get?

I’d have to start with the Taliban shooting a 14-year-old girl in Pakistan in the head because she believes in girls’ education and advocates more bravely for human rights than thousands of politicians and clerics in her country who defer instead to the Taliban’s medieval barbarism.

“Do Not Shoot Children” is most definitely a bottom-testing idea for me.

The Taliban vows to continue its mission to assassinate Malala Yousafzai, should she survive this attempt. Pakistani clerics remain sickeningly silent on the matter.

The bottom is tested, and lowered.

The frightened part of me wants to quarantine or miniaturize this abomination. It happens elsewhere. Its cruelty is spiritually incomprehensible and unusual, and that’s why it makes the news. It happens for reasons too “complicated” to decipher or combat. These self-soothing statements are largely untrue and cowardly, of course. Still, when faced with soul-rending cruelty part of us tries to contain the damage by making it a tragedy that signifies nothing in the general, but only in the specific.

Then I read about a trial in France of defendants charged with having repeatedly gang-raped two girls for months. “She’s too ugly to rape,” a defendant said, among other things. These are comments that no human would say, right? One victim has been called a nymphomaniac who really “likes sex” like this. It’s a new bottom. The old bottom was, “Don’t Make Fun of Victims of Horrifically Violent Assaults.”

Next item in the box: A friend forwards a Facebook page. “R.A.P.E. is sex you didn’t know you wanted.”  I get stuff like this a fair amount, from friends who want us to report it. This page shows a bound, semi-nude woman with duct tape over her mouth. For Zuckerberg, the Twerp Overlord, this qualifies as “Controversial Humor” and was let stand for some time. Facebook thinks misogyny and rape is funny. Funny, hah hah not funny, strange.

Show an endorsement of rape and a woman bound and gagged in duct tape and rope, and it’s Controversial Humor.

Lighten up? No way. Done too much of that already. Cutting slack and playing along to appear good-humored, fun, and/or agreeable to people who treat women and girls with disregard is how we get pages like this in the first place. Being all casual and fey and would-be hipster about sexual consent while tossing out career-advancing, faux-provocative bullshit like, this is just bad sex, that you regret the morning after, is all part of the path that has led, and leads, to the diminution of rape to a punch line.

I’m getting tired. I want to curl up and take a nice long nap.

I console myself by remembering media selection bias: I see more of this atrocious news because of my friends, and the publications I read, which select for women’s rights issues and examples of extremism. In this niched social media environment, we’re likely to hear things that already resonate with our leanings, whatever they may be, and this is just a skewed mosaic of sad fragments. Then again, I’ve lived in this media bubble for years now, and this is a disturbing two days, even by that self-referential benchmark.

And in any case, these examples aren’t remarkable for being typical, but for being possible at all.

Then I read that Arkansas Legislative candidate Charlie Fuqua writes in favor of a state-imposed death penalty for disobedient children. Fuqua told the AP that he thinks his views are “fairly well-accepted by most people.” Um, yes, well...

“Sentencing Your Children to Death for Sassing You.” That’s another moral free-fall statement that demolishes any previously established bottom for political conviction. It’s a hyper-extended case of the neo-patriarchy that social evangelicals embrace, an ideology that confers authority on Father and Husband to control his errant subordinates (wives and children).

It’s an Onion headline. Except it’s not. It wouldn’t matter as much. Except that the man is running for public office. And the spirit and gist of his views—that families (read: men as fathers and husbands) should have vastly more control and authority over their “charges” and dependents—isn’t all that exceptional.

As we test the bottom of our humanity, there must still—still!—be some line that won’t get crossed.

Hitler used to play that role. The first one to mention him in a political fight lost, even if it was just to draw an unfavorable comparison to a policy foe. But Hitler and Nazi analogies are now lightly woven into the discourse. Obama gets likened to fascists, and no one except maybe Chris Matthews notices anymore.

But American slavery. Now that’s a cruelty and a moral barbarism that no one would endorse.

Except Jon Hubbard, an Arkansas legislator. He says in his book that it was a blessing, really, for those who survived. He also vows to “defend Christianity” in office—apparently unconcerned or unaware that this isn’t a theocracy.

Is there an even worse rock bottom in our future? It’s hard to imagine. But I never would have imagined these, either.

I can only begin to speculate on the cultural precursors to acts of cruelty. We’ve always had cruelty, and probably always will, but not always of the same kind, or for the same reasons. In post-humanist times, when fundamentalist belief prevails over affection for humans and their reasoning capacity, and when the offhanded hatred in public and online discourse (across the political spectrum) coarsens our sense of other people’s humanity, and their very reality, cruelty becomes easier. Unyielding judgment and lack of sympathy becomes honorable rather than abhorrent. Contempt becomes proof of integrity rather than cowardice.

This is a crystalline voice speaking about what humans need. “Rights” gets tossed around a lot, but the most basic entitlement we have is to be human, pure and simple, respected as such, and free to do what humans do.

In her example and others, we seem to have fallen out of the habit of being human.