Pointlessly Genderized Item of the Week 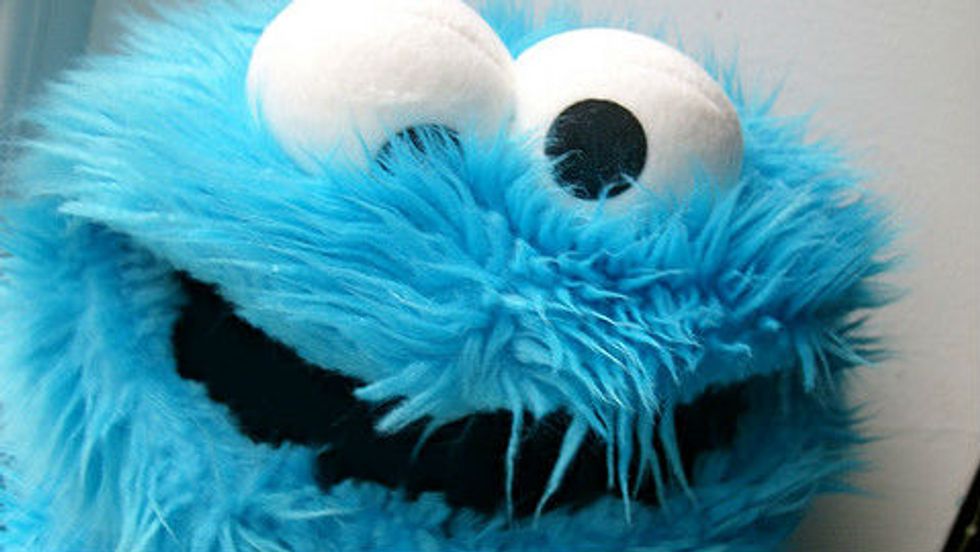 This one comes courtesy of a dear friend, who monitors the superfluous, hyper-genderizing of merchandise.

At just the moment when gender roles for many of us have never been more potentially flexible or malleable, corporate America genders the hell out of everything. They make girl and boy versions of items ranging from light switches to, yes, pens (Bic for Her—whose marvelously redemptive, sardonic customer reviews have gone viral).

Finally, that awkward embarrassment of the unisex pen has been solved!

Here’s the latest example: His and Her Cookie Monster Halloween costumes for young children.

My friend makes a great point about this costume. It’s hard to feel in control and carefree when you’re walking around at the end of October worrying about your underpants showing, and with cold legs, in an outfit that is unsuitable to play, comfort, or spookiness.

The pointless genderization of the Cookie Monster isn’t unlike other examples, but it troubles me more, because the whole cool thing about monsters is that they don’t have to conform to conventional, human biology or social roles.  That’s why they call them “monsters.”

Monsters offer an imaginative freedom and latitude that Princesses don’t. A monster can be anything. A princess, by definition, can only be a girl. Why deter preschool girls from the chance to be a funny, comfortable monster in a cozy monster suit by offering a suitably “feminine” alternative to something that absolutely, positively does not require or invite one? Why reinforce subtly—or not that subtly—that a girl shouldn’t or can’t be a flat-out, regular old monster, which sounds fun, by selling a gendered alternative?

Sure, in the perfect world, parents exercise perfect control over the dense thicket of pop culture through which children wade. They don’t allow its products to infiltrate their children’s lives. If they don’t want their girl in a Cookie Monster Princess knock-off, then they can shield her from that.

Yeah, right. If you lived in a perfect vacuum, and never ventured into a toy store, a movie, a home with a television, or onto a street with a billboard, or bought a cereal box with a cross-promotional advertisement, or let your girl have a friend or go to a birthday party, then the hypothetical of perfect Ayn Rand self-determination and individualism is possible.

Otherwise, you’re part of the real-world feedback loop by which children get talked to by corporations as consumers, and then “talk back” by buying things that it’s been suggested that they like.

While choice exists, it is not infinite, transparent, uni-directional, or vast.

We can debate in chicken or egg fashion about what comes first—girls’ putatively spontaneous interest in girlish stuff that we musn’t thwart, as if wearing pink and tulle are as basic to being female as the survival instinct, or the corporate suggestion that they like girl-y stuff because it’s right there, and all but advertised in the pink-slathered Girls’ Toys aisle as, “products that real girls should like.”

But whichever comes first, we end up in the same place, with both a chicken and an egg of a girl, in a She-Cookie Monster costume.

And here’s the bottom line, or at least one of them: You can’t feel truly liberated in life when you’re wearing uncomfortable shoes, or clothes. I think that rule applies universally, to males and females.

You can’t feel at home in your own body as a girl or woman if you’re fussing and worrying about your underwear showing, your skirt riding up, your breasts getting exposed, or when you’re freezing your legs off.  Being truly sensual in life means living in conversation with your own body, and your own physical pleasure and comfort.

I know, I know. Right now, someone’s thinking, “it’s all just fun. What does it matter.”

I get that point. There’s also a persistent tendency to dismiss small choices as harmless.

I should confess here that I like clothes. A lot. I’m a dress fiend, a mini-Imelda Marcos of cute summer frocks and heels. I wear brown and red lipstick, too. No one—not even feminists, gasp!—want humans schlepping around in burlap bags, or marching with their gray, unisex, Soviet-era uniforms. In fact I’ve written before that I consider an eye for personal style to be almost a civic duty. You don’t have to spend money to respect other people in the public sphere simply by not dressing like a slob, and trying to be thoughtful about your fashion sense.

So don’t worry. No one’s trying to guilt trip you about your sexy adult clothes. It’s the most tired, anti-feminist straw man out there, to think that feminists despise sexiness when they did so much in the first place to free up women’s libidos.

The problem isn’t fashion and its sexy, uplifting delights. It’s the over-specification of gender roles for children. It's the introduction of His and Her binarism to places where it doesn’t belong, and doesn’t need to be.

It pays to be mindful of the details. Gender stereotypes or oppression don’t announce themselves conveniently with big billboards, or hit you over the head.  There isn’t any warning label on certain products that they might contribute to Negative Gender Role Socialization in Children. It’s vastly subtler than that. Constraining ideas about femininity or masculinity sneak up on us. They’re cumulative identities that are acquired by a million little pieces, and constantly learned and re-learned, through all the choices we make about how we speak to, clothe, play with, entertain and interact with our kids and each other.