Does “Binders Full of Women” Reveal Anything Worth Noting? 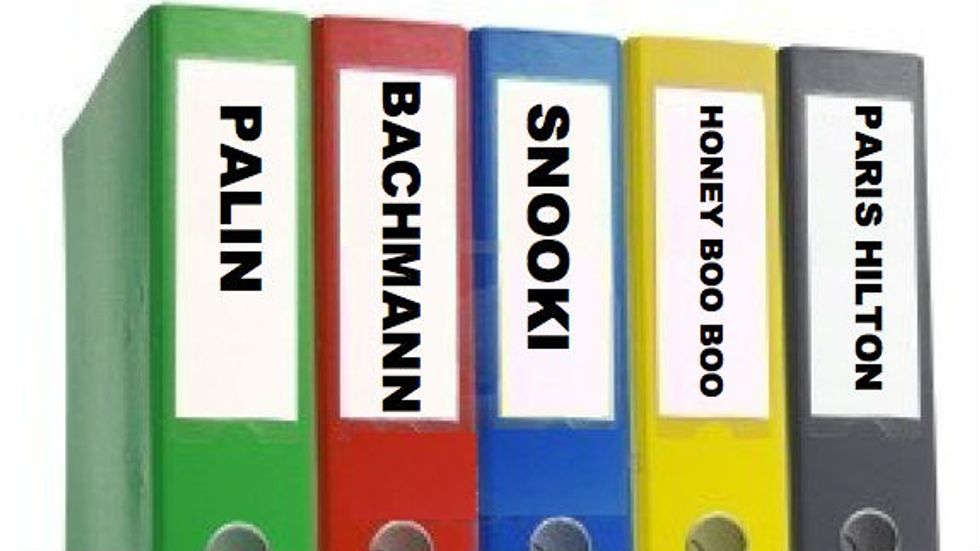 I was laughing myself silly over the Mitt Romney’s “Whole Binders Full of Women” comment last night in the presidential debate—and it’s a strange world where an off the cuff comment can be deemed infamous 10 hours after it was uttered. The meme for “binders full of women” was snatched up within seconds after the riotously awkward phrase escaped the notoriously awkward candidate’s lips.

Romney was answering a question about pay equity for women, and recounted how many women he had in his own administration. He said that he’d gotten “whole binders full of women” who could fill high-level positions.

It’s the nature of social media to take mildly amusing comments and turn them into transitory big events. Gossip has more velocity and political gravitas in the hands of web-enabled media than ever.

I wonder if the awkward phrasing really connotes anything, though. Is it like the “tell” in a poker game, where a player subtly reveals his hand and intentions by almost indecipherable, unconscious cues?  Or, is this cigar just a cigar?

I don’t want to be too serious about it. But our unguarded access to a candidate’s inner convictions and feelings is so muffled by layers of preparation and sound bites these days. I yearn for the unmediated glimpse that a good Freudian slip or a memorable grammatical error in an unscripted, spontaneous moment might provide.

The first thing to observe is that most people in a high-powered profession don’t find their women in binders. Most probably have them already as professional colleagues and business acquaintances, in their own lives and social networks. The fact that Romney found his by asking that someone gather dossiers reveals the dearth of women in his own professional circles, and his rarefied, largely male financial world. He didn’t have women to call up informally about potential positions in his administration. Although it’s good that he interviewed and hired some.

(On a happy note, the binders show the strength of women’s networks in Massachusetts. Although you wouldn’t think an awkward phrase could be fact-checked, according to a Salon article today, it’s not entirely accurate that Romney initiated the woman-finding mission. Instead, a bipartisan coalition of women generated the binders for Romney as part of their effort to address women’s under-representation in leadership positions).

More revealing to me is the specific grammatical error that makes this statement funny in the first place—that explains how the joke “works.”

With “whole binders full of women,” of course, Romney is conflating the human subject—a woman—with the object that would contain the resume that describes her.

The women are interchangeable with the binders. It would have been accurate to say, “I got whole binders full of women’s resumes,” or “binders full of resumes describing women candidates.” Those phrases, obviously, would have distinguished the utilitarian object from the subject.

The elision is funny. But it’s the instrumental, utilitarian logic of the error that gets to me.

The subject is the thing, the thing that they can do for Romney.

His simple grammatical lapse wouldn’t resonate as much, except that it’s in character with larger concerns that the man’s disconnected, devoid of any core, non-instrumental values aside from his private devotions to family, friends, and faith, and prone to “use” things in a larger sense. He uses ideas and beliefs when they can secure him advantages and then happily changes them when they can’t.

All subjects and beliefs seem to exude a certain thing-ness to him.

"Whole binders of women" reminds me strongly of another Romney-ism, when he recalled telling his landscaper that he couldn’t have illegals working on his grounds, “for Pete’s sake,” because he was running for office. The implication was that if it wasn't for his public persona, he’d have no issue or concern with illegals at all. Probably, he wouldn't have noticed them that much.

You get the sense that the remote figures of the “47 percent,” immigrants, women professionals, or other populations largely invisible in his immediate world exist mostly as rumors. They’re stashed in binders in his imagination and become relevant, if not entirely real, mostly when they’re politically expedient.

Romney’s comment in this same answer that he realized he needed to give women flexibility so that they could go home and cook dinner worked at similarly revealing cross purposes. The statement was uttered to demonstrate compassion and connection with women but revealed instead the candidate’s archaic, stereotyped views of marriage and family life. Women must rush home to cook dinner for hubby, as if fathers and husbands cannot or do not perform household labor like this.

The various groups of women whose votes are so critical this year should take note.

Sound bites can squeeze the air in the balloon of a candidacy, but the candidate’s more natural, spontaneous orientations just pop out one way or another—inevitably, and sometimes amusingly.