Do You Have a Morganatic Marriage? 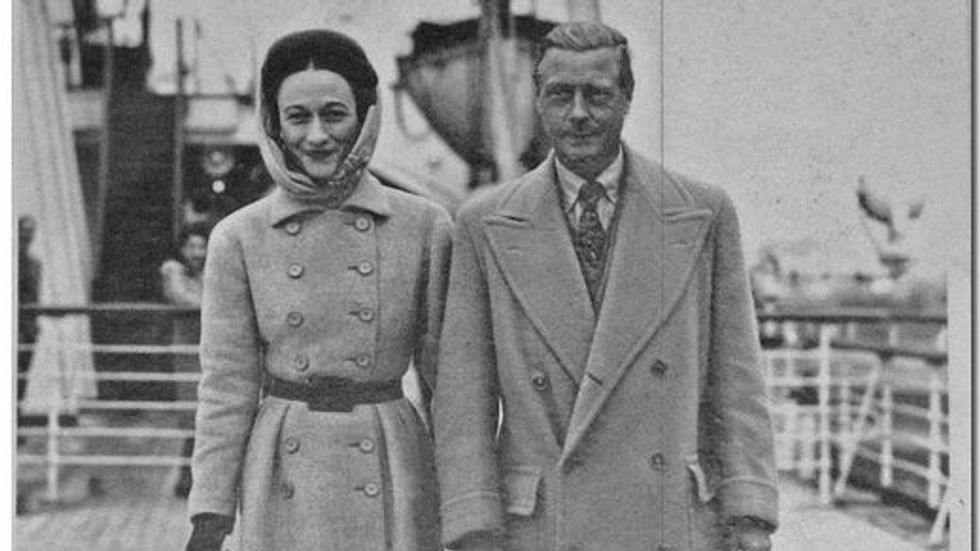 I was reading a 1937 essay in which the author made casual mention of the problem of “morganatic marriage.”

I’d never heard this term before.  I figured it might be a marriage problem I’d have, so I looked it up.

Morganatic means a marriage of unequals in class. A person of high social rank, particularly a member of the nobility, marries someone of lower rank, with the stipulation that the spouse won’t have any claim to the inheritance or property of the higher-ranking spouse.

Ah, that old problem. At least I can cross this one off my list.

Having only the Kennedys, Kardashians, and other celebrities to function as our quasi-aristocracy, the morganatic dynamic doesn’t precisely apply in America, but we have facsimiles of it.

One morganatic moment happened in 1936, when Britain’s King Edward VIII famously abdicated his throne and inheritance to “marry the woman I love,” the divorced commoner from Baltimore, Wallis Warfield Simpson, who had been his mistress for years.

And the Ur love story of the 1970s—conveniently called Love Story, by Erich Segal—was essentially about a morganatic marriage. Love Story was an astonishing blockbuster, on the New York Times bestseller list for 41 weeks. It was the Fifty Shades of Gray romance of its day, except that it was a sweet, ingenuous, and vastly better-written “Fifty Shades of Yellow,” not morbid gray, even with its tear-jerk ending. Whips and bruises weren’t involved.

Love Story’s hero, Oliver Barrett IV, is a hyper-wealthy, legacy Harvard jock and scholar who is disowned by his plenipotent father when he marries Radcliffe student Jennifer Cavilleri, the brilliant but poor daughter of a Rhode Island baker.

In both Simpson’s real-life love story and Love Story, the romantic standard holds that you marry for love, not money. The more economically devastating and impractical the union, the more you know it's the “real thing,” and not materialistic calculation.

Wallis Simpson's fairy tale inverted Cinderella's. Hers wasn’t the story of the shop girl becoming a princess, but of a prince becoming a figurative shop girl—a poorer man—for the privilege of marrying her. Unlike Cinderella's tale, which lifted the scullery maid up to wealth and nobility, Simpson's love story pulled a prince down from it on the mesmeric power of true love.

It was the same with Love Story. You knew that Oliver and Jenny’s love was true love, precisely because it didn’t make any sense pragmatically or economically and, as with King Edward VIII, the marriage exacted a profound financial toll.

In the mid-20th century heyday of the romantic ideal, sociologist Oliver Butterfield observed, among others, that "America appears to be the only country in the world where love is the national problem. To admit the desire to marry for any other motive than 'true love' is to risk being considered mercenary and materialist."

So the problem of the morganatic marriage, that it is a marriage of class unequals that thwarts the intra-class transmission of wealth, became the ideal in the romantic rendition of marriage, a coveted certification that the marriage wasn’t a gold-digging, mercenary, soulless union for the sake of money, wealth, convenience or other sordidly efficient ends.

Morganatic describes a marital problem that we now see as a marital virtue.

Other marriage heresies have become more accepted and normalized as well. They include interracial marriages; cross-religious marriages, which used to be referred to with hand-wringing anxiety as “mixed” marriages; cross-ethnic marriages. In one liberalizing step, the “War Brides Act” as amended in 1947 lifted the ban on Asian immigration for military spouses and fiancées.

I’m thinking about all of this in light of Maryland’s history-making ballot approval of same-sex marriage yesterday.

I always see myself as marriage’s loyal opposition. Marriage is enduringly valuable and will survive as a social institution—but on updated terms. Changing a bit with the times, rather than bracing rigidly against them, paradoxically keeps marriage stronger.

Marriage’s functions to ensure paternity have been replaced by DNA tests. Its functions of economic support for wives have been replaced by women’s paychecks. Its “biology as destiny” functions of childrearing endure, but people also marry today for reasons that have nothing to do with having children, and they control their fertility, and our idea of marriage can and should adapt to that reality. The core concepts of marriage that haven’t changed—ever—are that it binds people in a legal partnership and provides assistance and companionship and the chance to form a household or family unit, if the spouses desire, with two parents. Things change, and marriage changes, but it endures in this core. Some of its other meanings go the way of the morganatic dodo.