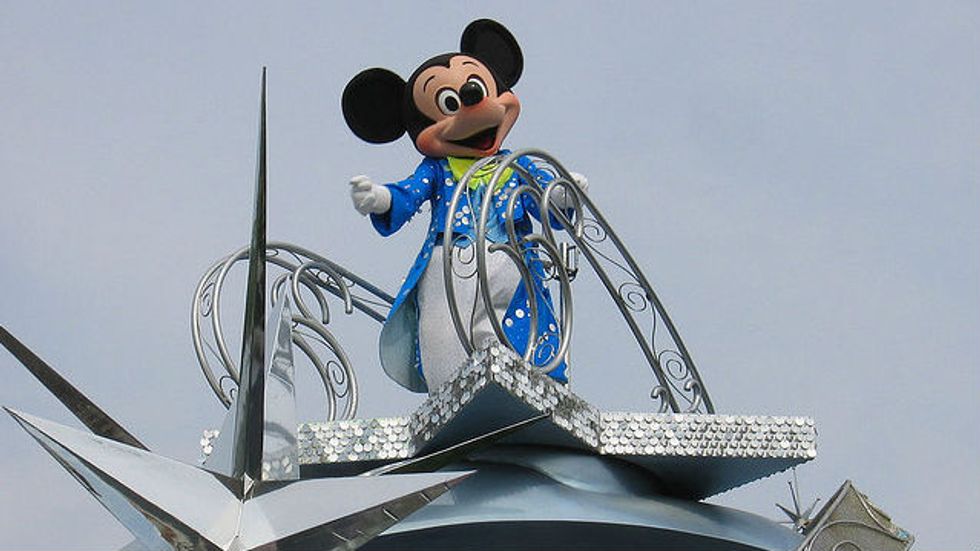 I was going to write about this yesterday, but for many hours I was convinced that it had to be an Onion article, or a social-anthropological experiment designed by an ambitious graduate student. But, as I’ve written before, parody is endangered in an unhinged culture where anything that you can imagine as parody has already been proposed as reality somewhere else.

The New York Post reported yesterday that “wealthy Manhattan moms” hire disabled people to pretend to be part of their family at Disneyworld, so that their children can cut in line and get quick, special access to the rides. Social anthropologist Wednesday Martin learned of this scheme while researching a book, “Primates of Park Ave.”

Like the KKK and other subcultures with their own deranged worldviews, the rich of Park Ave. thrive on flashing their status-conferring, in-group privilege among themselves. For some parents, children are mostly lifestyle props and narcissistic investments, anyway, through whom they display their affluence, power, and influence.

Meanwhile the rest of us are doing this heavy lifting with our children. We’re trying to teach them to treat people equally and decently, to wait in line for their turn, to follow the rules, to be ethical, to respect fair play and competition, to have values other than instant gratification, the abuse of privilege, pleasure, greed, and selfishness. But apparently line-butting Manhattan moms don’t do that parenting work anymore.

Indeed, the celebration of line-cutting, rule-breaking, and unbridled class privilege at a ride at Disneyworld pretty much encapsulates in one small gesture much of the soul sickness and moral vulgarity of the 21st century—its hard greed, cruelty, valorization of selfishness, and social unraveling.

What’s happened to our rich?

There was a time in the U.S. when inter-generationally privileged WASP families at least—at least—believed in a noblesse oblige to assume “leadership” in society.  Yes, of course:  that mission was patronizing, sometimes lethal for the non-rich, and condescending. But it goaded rich people to think that with great privilege came responsibility. At least they believed that they belonged to society. George Bush, Sr., is probably the best example. You don’t get the sense that Bush really burned with ambition to be president (remember his watch-glancing “tell” during the debate?), but he did it because it was expected of his class. Franklin Roosevelt, the “traitor to his class,” is another example.

There have always been rich people who were as morally bankrupt as they were financially wealthy. Some of them got rich through moral bankruptcy. But I find myself almost nostalgic for the WASP class of the hyper-privileged who felt that they had to be humble, somewhat socially engaged, and at least superficially obedient to the same rules as the rest of us, as a point of good manners if nothing else.

Instead, Americans who make reasonable arguments against corporate welfare and corporate socialism in the form of bailouts, tax evasion by the wealthy, tax laws that privilege investment over labor, a starker income inequality than ever, Citizens United, the trashing of unions, and austerity are accused of being envious or engaging in “class warfare” or discrimination.  In response, rather than exercise leadership and humility about privilege, the 1% finds a way to whine and wheedle itself indignantly into the tent of “Victimization” by complaining that they’re being wrongfully maligned or discriminated against by people who criticize structural sources of inequality and cheating.

Bring it on, please, if by “class warfare” you mean that we insist on chants democratic about how the privileges and rights of living in America cannot entirely go to the already-wealthy, but must instead offer fair play and a chance at a hard-earned decent life for everyone. Personally, I live a nice parenting life of relative prosperity, interesting work, and friends, so it’s not envy that fuels the anger. It’s injustice.

By an accident of birth these children have had their innately good and decent moral instincts stunted by small but cumulatively devastating parental lessons, each day, in materialism, greed, and selfishness, that the only thing that matters is their own pleasure, that the rules don’t apply to them, and that fair play and hard work are meaningless.  There is a fair amount of hand-wringing and judgment about how extreme poverty corrodes moral sensibilities and encourages drug dealing or crime, but at the other economic extreme, the same damage gets done, from opposite circumstances. Have a mom demonstrate selfishness and privilege, and butt in front of people enough times, and her children learn, just as some poor children do, that society doesn’t apply to them, the rules are moot, and that all of it can and must be gamed. The rich Manhattan mom, however, has no excuse, certainly not poverty or desperation, to explain her moral failure. Just venality.

Line-butting Manhattan mom, you are a 21st-century Dorian Gray. I wish you a crash down to earth:

Speaking of privilege and heartlessness…Here’s a wonderful follow-up to Abercrombie and Fitch’s stance that they won’t make clothes for non-skinny girls because they want to maintain their “cool” image, in which coolness correlates with skinniness (not).  Huffington Post shares this video of Greg Karber donating Fitch clothing purchased from the “douchebag section” of his local thrift store to homeless people. I wish I’d thought of that.