In what claims to be the most advanced study of the case to date as of this past spring, forensic scientists said that they have at long last found out the identity of Jack the Ripper.

In 1888, the streets of Victorian London were seized by terror as a mysterious person by the moniker Jack the Ripper murdered and disemboweled five women in the city’s Whitechapel district over a three-month killing spree. For over a century, the identity of the Ripper has remained a mystery.

Genetic tests published in a peer-reviewed journal this past March point to a 23-year-old named Aaron Kosminski. The Polish barber was a top police suspect at the time, but now DNA evidence substantiates the early hunch.

The alleged proof comes from a blood and semen stained shawl said to have been found near the mutilated body of Jack the Ripper’s fourth victim, Catherine Eddowes. The researchers extracted mitochondrial DNA from the shawl and found that it matched DNA taken from a descendents of Kosminski and Eddows.

However, critics say that the evidence is too weak to declare the case closed. For one, as mitochondrial DNA expert Hansi Weissensteiner pointed out, this kind of genetic evidence can only exclude a suspect. In other words, the mitochondrial DNA from the shawl could be from Kosminski, but it could also have come from any one of the thousands of people passing through the streets of London at the time. Another critique is the lack of evidence that the shawl was ever at the scene of the crime in the first place.

As it looks like the case is far from ever coming to a close, here are three other theories on the true identity of one of history’s most wicked serial killers.

The Grisly Murders of Jack The Ripper

One genetic analysis of letters sent to the police by a person claiming to be Jack the Ripper suggested that the murders could have been committed by a woman. Shocking as it may seem that such vile and diabolically misogynistic crimes, which included the removal of some of the victims’ uteruses and parts of genitalia, could have been committed by a woman, it isn’t that far-fetched.

While wounds of the victims were indeed messy, hence the name of the villain, they were surgical enough to indicate that the killer had some anatomical knowledge of the female internal system. This has led some to believe that the killer was a deranged midwife. After all, who else could have strolled through the London streets literally red-handed at a time when the city was ridden with mass hysteria over the crimes and gone un-suspected? A woman at the time would have prowled almost completely under the radar.

This Jill the Ripper theory was actually suggested by Frederick Abberline, the detective who led the investigation. It is rooted in an intriguing account of the fifth Ripper victim, Mary Kelly, who was allegedly seen by a witness hours after she was said to have been killed. Could the murderer have been a woman who inconspicuously slunk away in Mary’s clothing?

Only one women has come up as a serious suspect. Mary Pearcey was convicted of murdering her lovers’ wife and child in 1890 and hanged. According to the Independent, her modus operandi was apparently similar to that of Jack the Ripper. 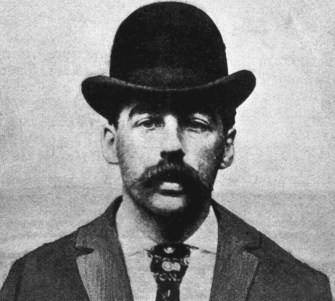 A descendant of the infamous H.H. Holmes, born Herman Webster Mudgett, claims that the Chicago serial killer doubled as Jack the Ripper.

In the late 1800s, Holmes also went on a nefarious killing spree during which he butchered at least 27 people in his labyrinthine murder hotel designed to lure in and dismember women. His sadistic urges let him to rob corpses, mangle animals, and seduce women into murderous traps.

A lawyer named Jeff Mudgett, claims that two diaries that he inherited from Holmes, his great-great grandfather, contains details that link him to the murder and mutilation of prostitutes in London around the time Jack the Ripper petrified the city. The evidence was convincing enough to inspire a series by History.

The Grisly Murders of Jack The Ripper

During the Rippers prime, Londoners were eager to point the finger at medical doctors. “Jack” evidently had some anatomical knowledge and doctors had a shady reputation in Victorian England. Their professional need for corpses catalyzed a surreptitious market for dead bodies, and they were known to exhibit callous treatment toward women patients.

Some have pointed to the surgeon Dr. D’Onston Stephenson as the killer. He was believed to have contracted sexually transmitted infections from prostitutes and to have been a satanist at the time. Thus, he would have had motivation for removing the victim’s internal organs for the purpose of black magic rituals. The main evidence for this lies in the apparently symbolic patterns of the murders, including taking place in cardinal points, indicating some occultist decree.

Others have linked the eccentric American charlatan, Dr. Francis Tumblety, to the murders. He was in London at the time the crimes occurred where he was actually arrested for a misdemeanor and held by Scotland Yard. Suspiciously, after he posted bail and snuck back to the United States, the murders stopped.

Unfortunately, despite the theories generated by the field of “Ripperology” and modern DNA science, this case looks to be far from cracking.

“In our studies, people who are more intelligent don’t mind wander so often when the task is hard but can do it more when tasks are easy.”
Up Next
Neuropsych

8 principles that will make you smarter about money

It’s not the act of buying but how you spend money that improves happiness and life satisfaction.