New analysis adds another wrinkle to the notion that we are all made of stars. Researchers found that white dwarfs, remains of stars, are a key source of carbon, an element essential to life.

90 percent of all stars end their celestial existence as white dwarfs that keep getting cooler and dimmer over billions of years. When they are at the point of final collapse, their ashes get picked up by stellar winds and are spread throughout the universe. These ashes are chock-full of chemical elements like carbon, created deep inside the star just prior to its death.

While every carbon atom in the universe was made by stars through the fusion of three helium nuclei, astrophysicists have argued over which ones were the primary source of carbon in our Milky Way galaxy – white dwarfs or massive stars that exploded, going supernova.

Now an international team of astronomers found that white dwarfs in open star clusters of the Milky Way carry the clues to the source of the galactic carbon. Open stars clusters can have up to a few thousand stars, as explains the press release from UC Santa Cruz, whose Enrico Ramirez-Ruiz, professor of astronomy and astrophysics, led the study.

Ramirez-Ruiz and his team based their work on astronomical observations conducted in 2018 at the W. M. Keck Observatory in Hawaii.

“From the analysis of the observed Keck spectra, it was possible to measure the masses of the white dwarfs, explained Ramirez-Ruiz. “Using the theory of stellar evolution, we were able to trace back to the progenitor stars and derive their masses at birth.”

What Are White Dwarf Stars?www.youtube.com

By analyzing the connection between the starting and final masses of the stars, the scientists found that the initial masses of the white dwarfs were much larger than they predicted. The explanation for this “kink”? The creation of carbon.

“Our study interprets this kink in the initial-final mass relationship as the signature of the synthesis of carbon made by low-mass stars in the Milky Way,” shared lead author Paola Marigo from the University of Padua in Italy.

The research shows that before they died, the central cores of massive stars, twice the size of our Sun, grew even larger and fused carbon atoms in their melting insides. These were subsequently moved over to the surface and spread far and wide on stellar winds. 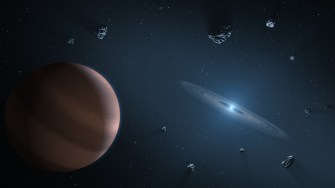 Interestingly, the scientists concluded that a star had to be large enough, weighing 1.5 solar masses to be able to diffuse its ashes full of carbon. A progenitor of this kind had to be responsible for the carbon on our own planet, crucial to life that came to inhabit it.

“Now we know that the carbon came from stars with a birth mass of not less than roughly 1.5 solar masses,” said Marigo.

The researchers also propose that a large amount of the light emitted by very distant galaxies actually comes from bright carbon-rich stars near death.