Rare fossil evidence of dinosaur cannibalism has been discovered by paleontologists in a large quarry near the Utah-Colorado border.

According to a study published last week, May 27, in the journal PLOS ONE, scientists analyzed dinosaur bones found in the Mygatt-Moore Quarry in western Colorado. In their examination, the researchers paid special attention to bite marks that were present on the bones. While many bone-bites were identified as originating from theropod dinosaurs, a diverse group of bipedal dinosaurs, there were cases where it was found that the bite marks were from the same genus as the bitten. Specifically, it appears that the predatorial beast Allosaurus, a type of theropod, occasionally dined on its own kind, making this an exceptionally rare finding of dinosaur cannibalism.

While scavenging and even cannibalism is relatively common among today’s predators, the Allosaurus probably didn’t eat their peers as a staple meal. According to Stephanie Drumheller, the study’s lead author, they were likely driven to turn to cannibalism as a last resort when times were scarce in food supply.

“Big theropods like Allosaurus probably weren’t particularly picky eaters, especially if their environments were already strapped for resources.” said Drumheller, a paleontologist in the University of Tennessee, Knoxville’s Department of Earth and Planetary Sciences, in a statement. “Scavenging and even cannibalism were definitely on the table.”

The Mygatt-Moore Quarry is home to thousands of dinosaur bones dating back to the late Jurassic period, somewhere in the ballpark of 150 million years ago. When the quarry was at its prime, it was thriving with lush vegetation making it a cushy home for many large dinosaur species, including the long-necked lizard Apatosaurus. The new study suggests, however, that at some point this dino sanctuary fell on some hard times, which forced local carnivores to scavenge for bits of meat from the picked-over carcasses of dead dinosaurs. 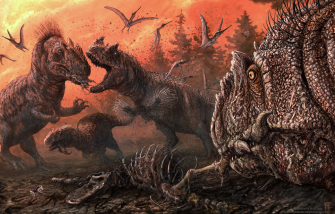 Fig 4. Dry season at the Mygatt-Moore Quarry showing Ceratosaurus and Allosaurus fighting over the desiccated carcass of another theropod.Illustration by Brian Engh (dontmesswithdinosaurs.com)

The researchers examined the bite marks on 2,368 dino bones from the quarry. Noting the width, depth, and pattern of the bite marks, the team was able to trace the chomp marks on the prey back to specific dinosaur species. Of those bones, 684, or 29 percent, were marked with at least one theropod bite. Many of those marks were imprinted by serrated teeth, suggesting to the researchers that Allosaurus (the most common theropod among the quarry’s fossils) did a majority of the biting.

Allosaurus tended to feast mostly on herbivores. Yet, 17 percent of their bite victims were other theropods. That included some fellow Allosauruses, making this the first solid chunk of evidence of cannibalism in the species; a deliciously novel discovery. Interestingly, however, most of the bite marks that the scientists examined didn’t appear to be killing wounds. More than half of all bite-marks found on the victim were on bony parts with little meat like fingers, toes and spinal columns. Not exactly the cut of meat a hunter with first-dibs would choose, suggesting that they were scavenging for the bare scraps.

Ultimately, these fossils tell a miserable story of dinosaurs down on their luck, left with no choice but to scrounge for measly scraps of meat off their own kin’s rotting carcasses.

Being mortal makes life so much sweeter.
The Past

Tracing the origin and development of jaws — and other anatomical features that humans share — sheds some light on how we came to be.
Up Next
Partnerships

How to finally bring your side hustle idea to life

Start building momentum by breaking your new side business idea down into manageable baby steps.