What documents of his did they add to the register?

This round of additions included the Cambridge Papers, a grand collection of Newton’s works. This includes his ‘Laboratory Notebook’ where he recorded the results of sticking a pin in his eye to induce color images (it didn’t quite work), his record of personal expenditures (he lost a bit of money at cards), and his personally annotated copy of Philosophiæ Naturalis Principia Mathematica (1687), one of the most important works in the history of science. Reading his handwritten notes, you can see the evolution of his understanding of physics from the first edition of his groundbreaking work and compare them to the changes he made in the second and third editions of Principia.

Amusingly, a list of the sins that he committed before and after Whitsunday in 1662 was also included. He seemed to have had a habit of doing things he should not, and then lying about it. He lists the sin of gluttony twice in a row, proving that geniuses are not so different from us after all. 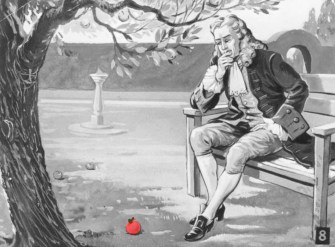 His first thoughts were to pie, not gravity.

The work of Isaac Newton changed how humanity understood the universe. From his determining that white light was composed of all colors and that motion is unrelated to material, to inventing calculus in a “waste book” for the sake of his own curiosity, the way his mind worked awes us. Alexander Pope was not far off when he quipped that, “Nature and Nature’s laws lay hid in night: God said, ‘Let Newton be!’ and all was light.”

Brush up on Newton’s Laws of Motion with Crash Course:

Population growth is driven by three changes: Fertility, mortality, and migration.
Up Next
Hard Science

Understanding the core tenets of the flat-Earth hypothesis

The Flat Earth theory has gained a surprising amount of traction in recent years, thanks largely to YouTube. What exactly do Flat Earthers believe?