We are more linked to the Moon than we’ve realized. It turns out that the outer part of the Earth’s atmosphere stretches considerably past the lunar orbit. In fact, it goes as far as twice the distance to the Moon.

This discovery is a product of observations by the Solar and Heliospheric Observatory (SOHO) — a spacecraft launched in 1995 to study the sun, operated by the European Space Agency (ESA) and NASA.

Measurements taken over 20 years ago by SOHO got a fresh look in a new study, which came to remarkable conclusions. What the data showed is that the geocorona, a hydrogen envelope which wraps around our planet, extends up to 630,000 km (391,464 miles) away from it. This distance is 50 times the Earth’s diameter. 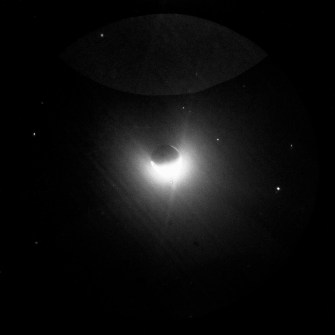 Earth’s geocorona from the Moon. An ultraviolet picture taken in 1972 with camera operated by Apollo 16 astronauts on the Moon. Image source: European Space Agency

Igor Baliukin of Russia’s Space Research Institute, the lead author of the study on the subject, explained that “the moon flies through Earth’s atmosphere.”

The geocorona appears where the planet’s atmosphere comes into contact with outer space. It’s essentially a cloud of hydrogen atoms. Between 1996 and 1998, SWAN, an instrument aboard the SOHO spacecraft, was able to use its sensors to follow hydrogen signatures, thus pinpointing the edges of the geocorona

“Data archived many years ago can often be exploited for new science,” said Bernhard Fleck, a European Space Agency SOHO project scientist. “This discovery highlights the value of data collected over 20 years ago and the exceptional performance of SOHO.” 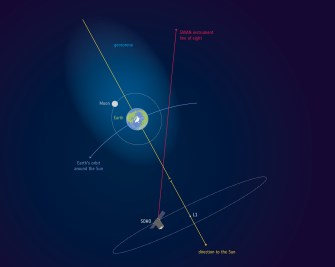 Besides being transformative in understanding our own atmosphere, the discovery may be helpful in searching for planets with water beyond our solar system. Detecting the presence of hydrogen in their outer atmospheres can mean the presence of water vapor near the surface.

Check out more SOHO accomplishments over 20 years in space:

Humans won’t survive if we stay on Earth. Michio Kaku explains.
▸
7 min
—
with
Michio Kaku
Up Next
Starts With A Bang

This Is Why February’s Full Supermoon Is The Biggest, Brightest Full Moon Until 2026

It’s a rare occasion for orbits to align so perfectly. Enjoy the sights this Tuesday.On Tuesday, February 19th, the Moon will reach perigee, its closest point of approach to planet Earth. […]