As we say goodbye to Cassini, the probe that left Earth in 1996 and will soon take the last plunge into Saturn’s atmosphere, we want to reflect over just what we learned from this well traveled little probe. Here we have the 14 greatest hits of Cassini–Huygens.

1. During the three year flight to Saturn, Cassini got some great pictures of the trip there. Including this one of the earth and moon. 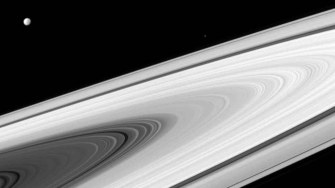 Saturn’s main rings, along with its and moons, are much brighter than most stars. (Image: NASA) 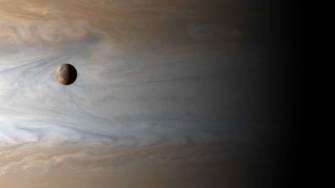 Jupiter’s moon Io as it orbits the planet (Image: NASA)

3. It also found that Jupiter’s rings are irregularly shaped, and probably made of dust from micrometeorites. 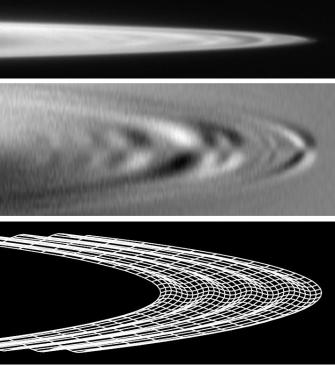 4. And what is a visit to Space without a quick check to see if relativity is correct? And, of course, the probe found that Einstein was right again.

5. After seven years, it arrived at Saturn. While there, it discovered seven new moons, including one that Voyager had already photographed but which had been dismissed. The Huygens probe, which was riding piggyback to Saturn, departed for the surface of Titan late that year, becoming the first object to land on a surface in the outer solar system. It then sent 700 images back (only 350 of which made it to Earth due to technical issues.)

6. It analyzed the surface of the moon, finding it to be like “sand” made of ice grains. 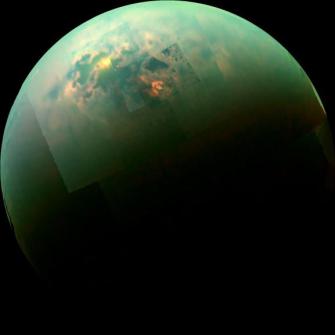 7. Atmospheric readings were made of Titan, showing it to be a dry, frozen desert.

8. In 2006, further radar images were taken of Titan, showing the first continuously existent lakes off of Earth. They are presumed to be made of liquid methane.

9. In 2008 Cassini turned it’s attention to Enceladus by passing through a geyser plume. Cassini found it was made of water(!).

10. In 2014 NASA declared that Cassini had found substantial evidence of a liquid water ocean under the Ice of Enceladus. 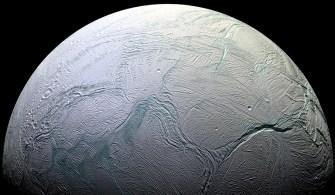 11. Oh, and Enceladus is now considered a candidate for life elsewhere in the solar system because of these findings.

12. While touring Saturn’s south pole, Cassini found a hurricane, complete with an eye. While storms exist on all planets with an atmosphere, the presence of an eye was an off Earth first.

13. The Cassini craft also found some surprising weather formations at Saturn’s north pole, which became known as the hexagon. The pole had previously been shrouded in darkness, i.e. tilted away from the sun, and Cassini’s flight path had not allowed for photographing.

13. On July 13, 2013; Cassini turned its cameras back at Earth, and took a picture. NASA promoted the image with an event called “Wave at Saturn”. The event, and image, are known as “The Day the Earth Smiled”.

14. And now, to prevent a decaying probe from crashing into one of the (possibly) life-bearing moons, Cassini will end its life by falling into Saturn. Images will continue to be taken and sent back to Earth as it draws closer to the planet.

An illustration of Cassini’s final approach toward the surface of Saturn. (Image: NASA)

Tags
Cassininasaouter spacescience factstelescope
In this article
Cassininasaouter spacescience factstelescope
Related
Hard Science
Cracking a mystery about Vesta, our solar system’s second largest asteroid
How did the troughs form?
Hard Science
Earth’s first puff of oxygen may be thanks to volcanoes
Scientists track down a puzzling early burst of oxygen on Earth.
The Future
NASA wants future humans to find this time capsule in space
NASA will use energy from Earth’s gravity to launch the Lucy spacecraft in October of this year.
The Future
Which countries are going to Mars this decade?
We are likely to see the first humans walk on Mars this decade.
Hard Science
Why so gassy? Mysterious methane detected on Saturn’s moon
Scientists do not know what is causing the overabundance of the gas.
Up Next
Neuropsych
Why Silicon Valley Titans Train Their Brains with Philosophy
Studying philosophy has had a major impact on the power players of Silicon Valley.