Since 1969, some geologists have been puzzled by a 7.9-magnitude earthquake struck off the coast of Portugal. What was peculiar was the location of the epicenter: a flat, featureless section of seabed. Normally, you’d expect to see faults, underwater mountains, or other signs of tectonic activity near the site of such a powerful earthquake.

Now, a team of geologists may have the explanation: Buried 155 miles below the seafloor near Portugal is a massive drip-like shape anomaly that seems to have been formed when the bottom of a tectonic plate began peeling away from its top.

At the European Geosciences Union meeting in April, the team suggested the findings could represent the beginnings of a baby subduction zone. It would be the first time scientists have ever directly observed such activity within tectonic plates, and the findings would also suggest that Europe is in the early stages of a centimeters-per-year tectonic voyage to Canada.

“It’s a big statement,” marine geologist João Duarte told National Geographic, which on May 6 published a story on the findings. “Maybe this is not the solution to all the problems. But I think we have something new here.”

He added that how exactly subduction zones form is one of the biggest unsolved mysteries in plate tectonics. For the most part, geologists only observed new subduction in places where there’s ongoing subduction.

“Most of what we know so far is that new subduction tends to stay in the places where we already have ongoing subduction,” Fabio Crameri, a Geodynamic modeller who attended the EGU lecture, told National Geographic. “But that doesn’t mean it won’t happen.” 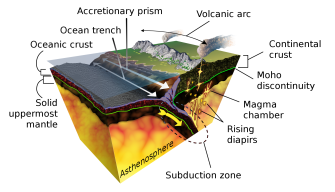 Interestingly, several geologists over the decades have theorized that a drip-shaped mass might exist some 155 miles below the surface. In 1975, geologist Michael Purdy even generated an image that looks strikingly similar to the recent findings. In 2012, a team was able to identify the mass by using seismic waves. And in 2018, a team used 3D teleseismic P-wave tomographyP-wave tomography technology to examine the anomaly once again.

To figure out why earthquakes were occurring this strange mass, and to test the hypothesis that the mass was caused by the bottom of a tectonic plate peeling away from its top, Duarte and his colleagues created numerical models.

“The key, [Duarte] says, likely lies in an seemingly innocuous layer in the middle of the tectonic plate,” wrote Maya Wei-Haas for National Geographic. “Past work suggested that water percolating through the ocean plate’s web of fractures had reacted with the rocks below the surface, transforming them into soft green minerals in a process known as serpentinization. Perhaps this layer provided just enough weakness to allow the denser bottom of the plate to peel away. Scientists believe tectonic peeling may be common under thick continental plates through a slightly different mechanism, and possibly even in old subduction zones, but it has never been documented before in pristine oceanic plates.”

“The identification of a first case of oceanic lithospheric delamination will certainly contribute to further our understanding of the dynamics of tectonic plates,” they wrote in a recent paper. “Old oceanic lithosphere may be prone to gravitational instabilities, which may play a fundamental role in the process of subduction initiation.”

Basic and breath-taking – Dr. Frank Wilczek addresses symmetry’s critical role in nature’s laws and what we consider to be beautiful.
▸
with
Frank Wilczek
Up Next
The Present

Are you ready for cricket burgers?

Over two billion people regularly eat insects. Why are Americans so squeamish?