An international team of researchers observed an unexpected quantum effect in an exotic superconductor. Their discovery can lead to the next generation of energy-saving technologies.

Traditional superconductors, used for conducting electricity without resistance, work at low temperatures. However, some iron-based superconductors discovered about a decade ago, work at high temperatures. How they do it has been unclear, especially as the magnetism of iron conflicts with the appearance of superconductivity, explains the press release from Princeton, whose scientists led the research.

The team’s leader, M. Zahid Hasan, Professor of Physics at Princeton University, likened their approach to throwing a stone in the water to see how water would react, pointing out “The way the superconducting properties react to the impurity reveals their secrets with quantum-level detail.”

Their team employed a technique called scanning tunneling microscopy to image individual atoms in a superconductor made of lithium, iron and arsenic while they added in cobalt atoms. They were able to observe how introducing more cobalt atoms made superconductivity disappear.

What was surprising, the researchers found that the cobalt atoms were able to disrupt electron pairing while replacing iron atoms in the metal. This behavior, which resulted in a quantum phase transition, changing the state from superconducting to non-superconducting, also violated the well-established Anderson’s theorem. Proposed in 1959 by the Nobel Prize-winning physicist Philip Anderson, it was the accepted explanation for what would happen if you added impurities to a superconductor. The new research clearly shows an exception to Anderson’s theorem.

Another unusual find revealed that the cobalt impurities also transformed the nature and the shape of the so-called “energy gap” – a feature emblematic of superconductivity. The shape of the gap is indicative of the “order parameter” linked to the nature of the superconductivity. The effect on this property is mysterious and points to a sign change in the order parameter’s phase. 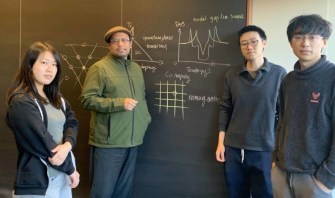 Postdoctoral researcher Ilya Belopolski, the co-author of the study, explained the significance of the researchers’ feat:

“Naively, distinguishing between conventional superconductivity and sign-changing superconductivity requires a phase-sensitive measurement of the superconducting order parameter, which can be extremely challenging,” said Belopolski. “A beautiful aspect of our experiment is that by considering violations of Anderson’s theorem, we can get around this requirement.

Check out the study published in Physical Review Letters.

Put two grapes close together in a microwave and you'll get an electrifying result, all because of the physics of plasmas.
The Present

After the 2011 Fukushima disaster, it was Germany, not Japan, that cracked down most severely on nuclear power plants.
Hard Science

MIT scientists show how fast algorithms are improving across a broad range of examples, demonstrating their critical importance in advancing computing.
Up Next
The Present